The Kaweah Peaks Ridge is one of the more rugged and remote features of the High Sierra and its jagged profile is recognizable from virtually all directions. The ridge is a spur of the Great Western Divide extending from a point between Lion Rock and Triple Divide Peak down to Mount Kaweah, and separates the deep glacier-carved “trenches” of the Kern River and the Big Arroyo River. Black Kaweah juts out as a subspur of the Kaweah Peaks Ridge and is the centerpiece feature Kaweahs, but Mount Kaweah is the highest point along the ridge. Unlike most of the Kaweahs which are rugged on a at least three sides, Mount Kaweah has a demure profile from the south and west where it simply looks like a giant pile of talus. Mount Kaweah would not be my choice for a first climb in the Kaweahs. However, the peak shows more of a rugged character on its eastern side where steeper terrain falls toward Kaweah Basin and a desolate lake at the headwaters of Chagoopa Creek. The standard climb of Mount Kaweah from the west off the High Sierra Trail is a long 3,000+ ft vertical slog on talus and gravel that is not very interesting. However, what Mount Kaweah lacks as a mountaineering objective, it makes up with tremendous views and a spectacularly scenic approach from Mineral King. This approach can also be used for Black Kaweah and the other more rugged Kaweah Peaks in the vicinity. All told, it’s about 30 miles and 13,000+ feet of elevation gain for the round trip from Mineral King to Mount Kaweah. Full photo album here. Map of route here (missing 3 miles).

Starting at Mineral King take the Sawtooth Peak Trail up to a small hanging valley. At this valley the unmaintained Glacier Pass trail departs from the Sawtooth Pass Trail. This unmaintained trail has some brush initially and a few sections have picked up rockfall over the years, but overall it’s easily followable as it makes a wide traverse into the next hanging pocket valley of Monarch Creek. Here the terrain becomes tundra-like with grassy slopes mixed in with talus fields. The trail generally parallels Monarch Creek for some distance before turning climbers left to ascend a moderately steep slope. Here the path can be difficult to follow, but with astute observation one can stay on the path as it continues to ascend up the slopes toward Glacier Pass. Not to worry if you have lost the trail as the cross country terrain is relatively easy and you will likely intersect remnants of the old trail and rock cairns at some point on your ascent.  Glacier Pass is a bit south and above the low point of the ridge south of Empire Mountain. A large cairn has marked the correct point of crossing which allows straightforward access down a class 2/3 ledge to alpine meadows on the north side of the pass. At these meadows another use path can be located which becomes increasingly defined as one descends to the gorgeous Spring Lake. Positioned immediately beneath impressively steep and smooth granite cliffs, Spring Lake is one of the more dramatic lakes in the High Sierra and is a joy to visit each and every time.

Traverse Spring Lake on its north side and aim for another small lake to its east across gently undulating terrain. From this small lake ascend steep slopes toward a pass known as “Hands and Knees Pass” or “Cyclamen Lake Pass.” On the maps this pass is labelled as point 11,145 making it an 1,100 ft climb from Spring Lake to the pass. It’s a steep climb but should go as class 2. Near the summit of the pass veer to climbers right to find a class 2 finish, otherwise the final rocks may include some class 3 moves. On the north side of pass traverse northeast toward the highest of the LIttle Five Lakes. This is best done by making a slight downward traverse across the slope beneath cliffs and then making a gradual ascent back to the ridge. Descend sandy, loose chutes into a bowl above the highest Little Five Lake and then descend easy granite and grassy slopes to the highest Little Five Lake and the Black Rock Pass Trail. Near the lake encounter grizzled Southern Foxtail Pines which have weathered countless storms over the years. An amazing Southern Foxtail Pine forest continues for much of the journey through the Big Arroyo Canyon and up the lower slopes of Mount Kaweah. Enjoy spectacular views of the Kaweah Peaks Ridge as it rises above the Little Five Lakes.

Follow the Black Rock Pass Trail to the seasonal ranger cabin at a middle Little Five Lake and then take the Big Arroyo Trail north to the Big Arroyo River. Pass an old cabin after crossing the Big Arroyo River and then join the High Sierra Trail and make a gradual ascent as the trail rises to the Chagoopa Plateau. At around 10,500 feet near a small tarn (which may or may not have any water depending on season and the prior winter snowpack) leave the High Sierra Trail. From here it’s all off trail up 3,300 feet of vertical to the summit of Mount Kaweah. The first part of the climb is through a beautiful forest of old growth Southern Foxtail Pine, perhaps the greatest of its kind as the Southern Foxtail Pine is endemic to a relatively small region of Kings Canyon and Sequoia National Parks. As one ascends, I found that it’s most efficient to stay on the edge of meadows near a creek that drains the southwest side of Mount Kaweah trading tedious talus for granite slabs and clumps of grass.  Ultimately one rises above tree line and the slog commences in full force. The climb is a mix of loose gravel and talus hopping that goes on for longer than one would hope as the summit looks closer than it actually is.  It is here that one realizes just how big of a talus pile Mount Kaweah actually is!

Eventually reach a low point between Mount Kaweah and Second Kaweah where the final several hundred feet of class 2 climbing presents itself. Once on top of the summit ridge another 0.20 mile of rock hopping leads to the actual high point on the south end of the summit ridge. Enjoy a stupendous view across Kern Canyon to the Whitney area, Mount Williamson, and basically all of the peaks that constitute the southern High Sierra and the Kings-Kern Divide. To the west across the Big Arroyo River Canyon is the southern half of the Great Western Divide and close at hand immediately to the north is the Kaweah Peaks Ridge. The summit perch provides a birds eye view into the remote Kaweah Basin and a desolate lake immediately beneath Mount Kaweah. When done enjoying the summit view, essentially retrace steps back to Mineral King. An out-and-back would ordinarily be inferior to a loop itinerary, but the vistas in the Little Five Lakes area and around Spring Lake are so phenomenal that seeing the views in a different light are rewarding. After making efforts to get back to Spring Lake before dusk, I was rewarded with amazing evening light in that area and highly recommend it. 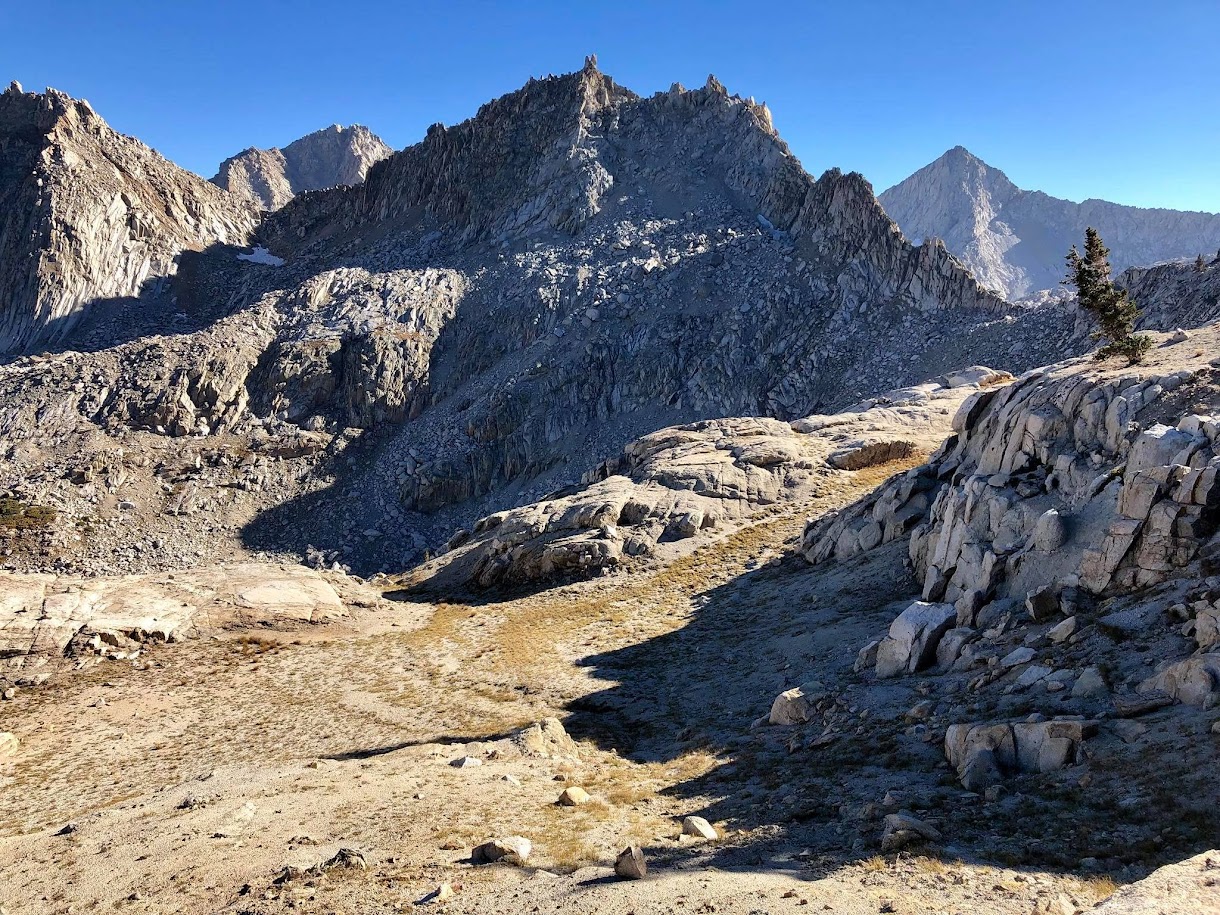 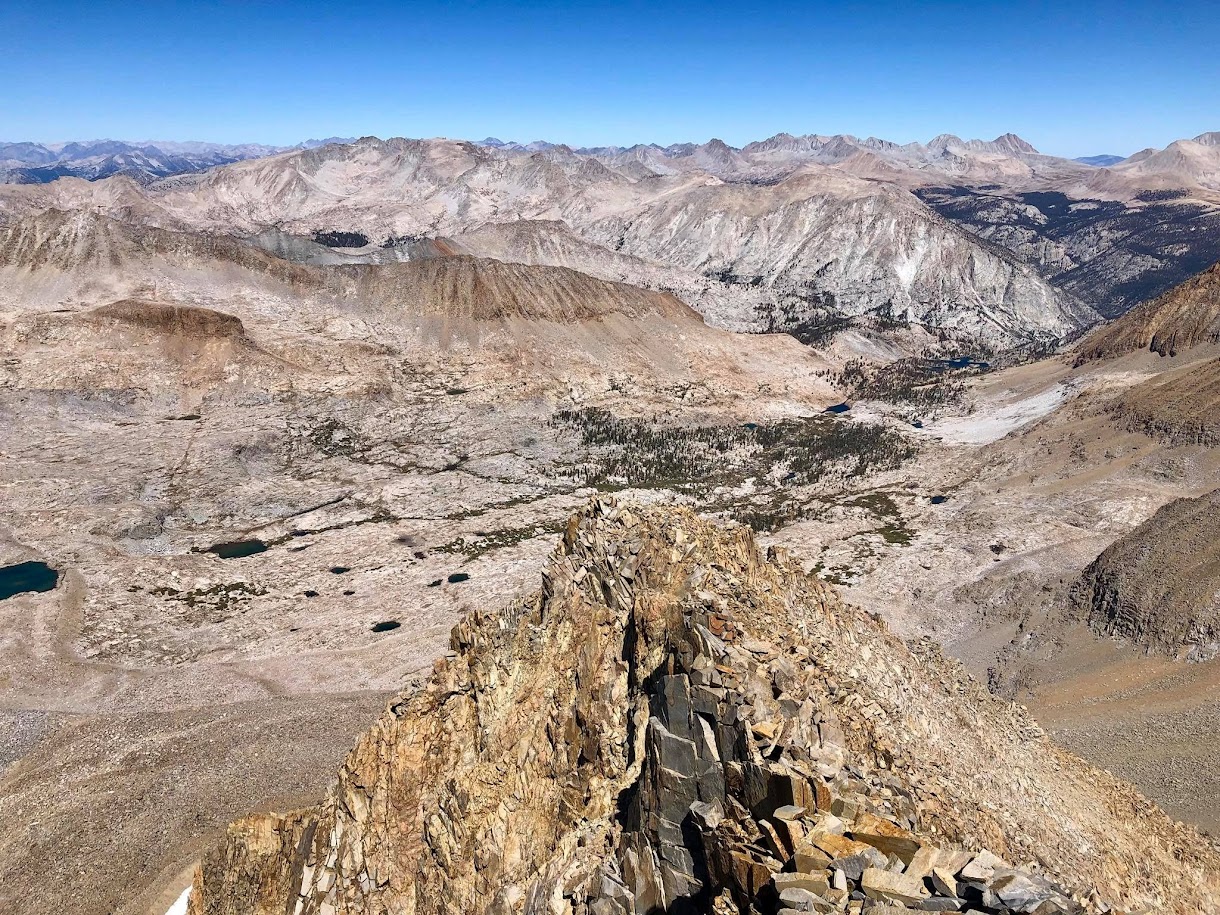 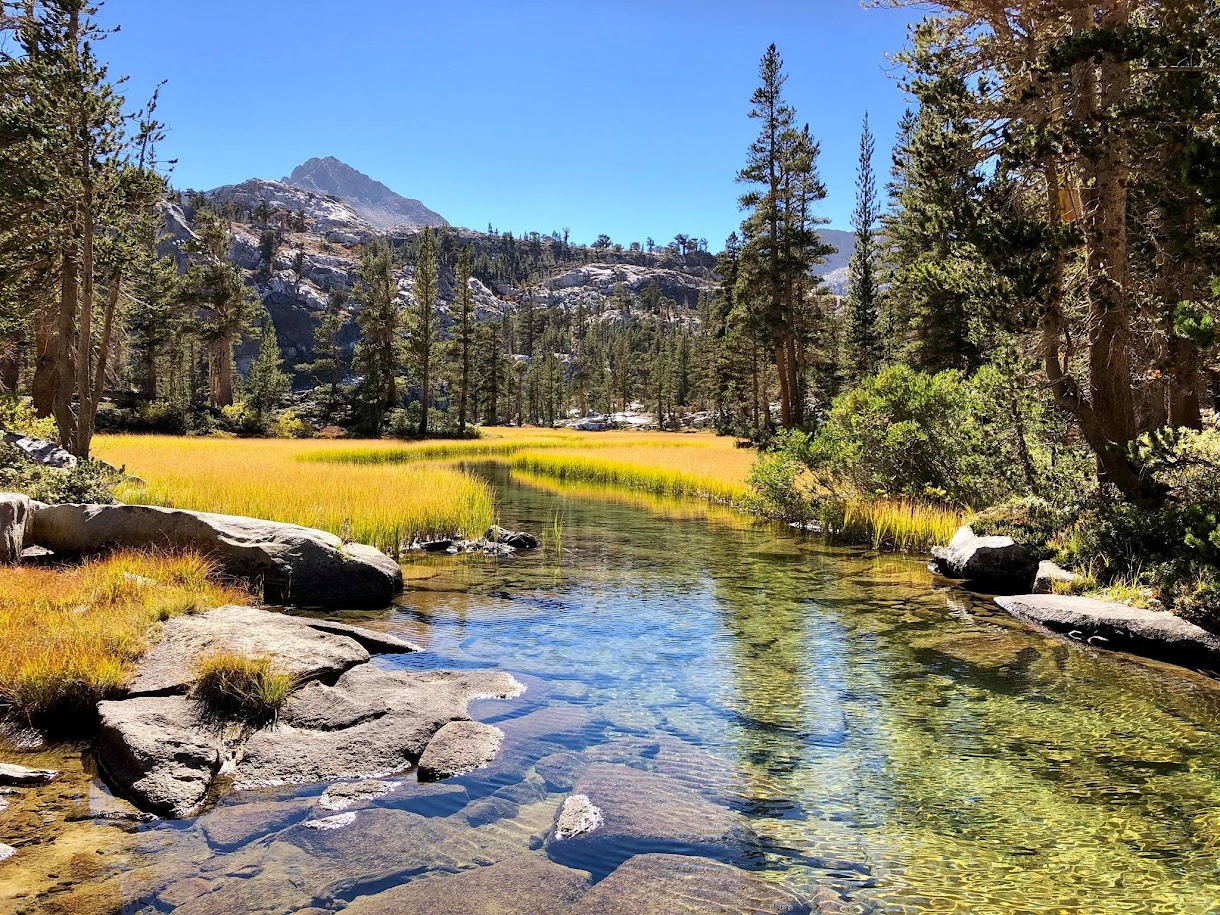 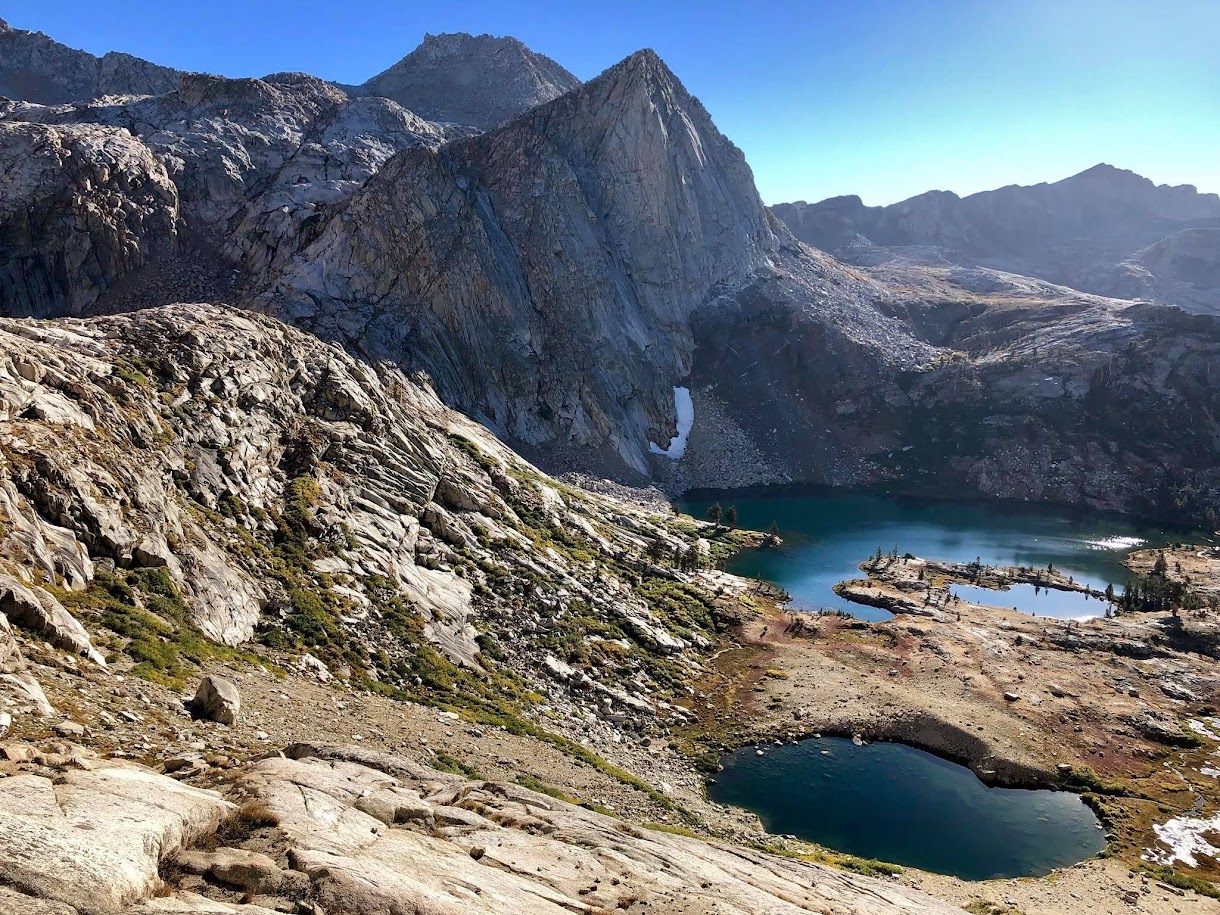 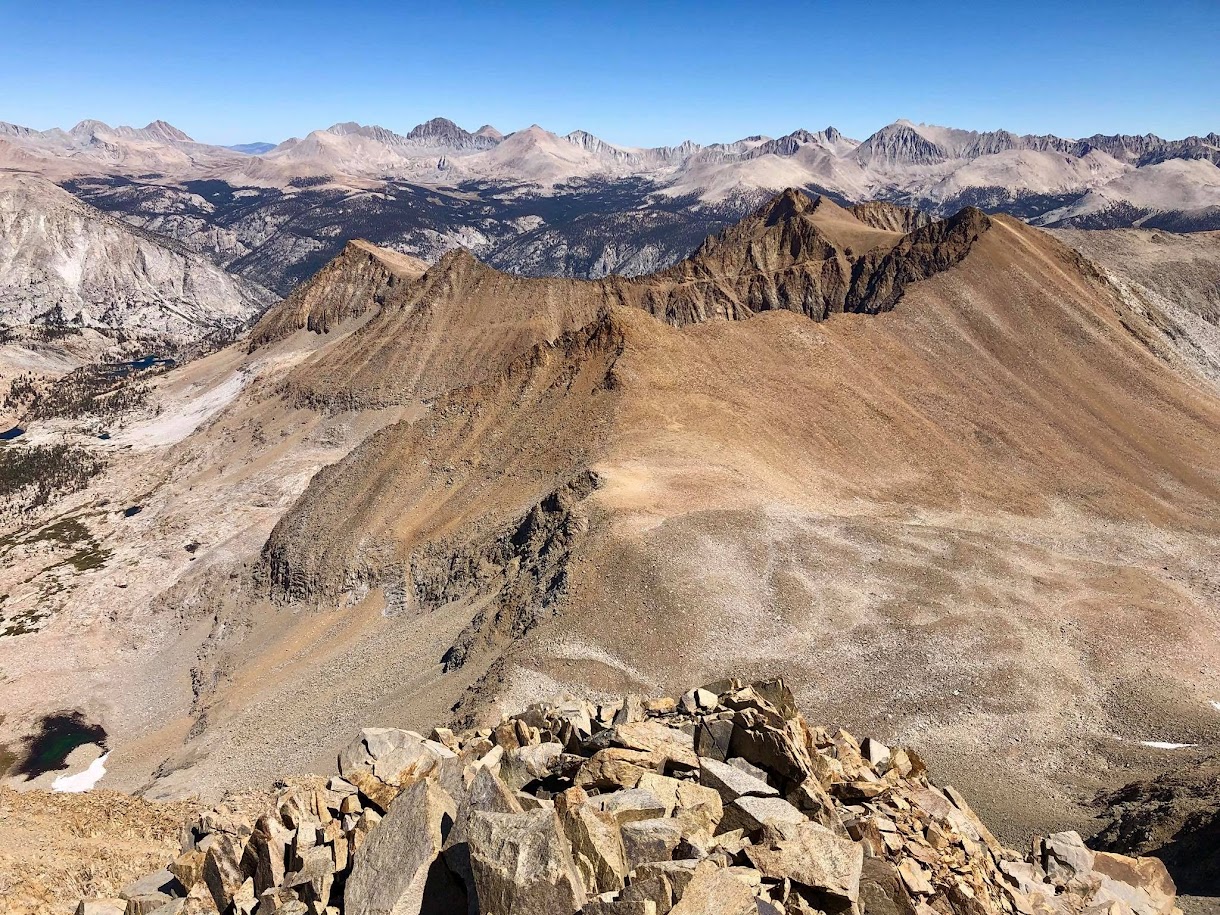 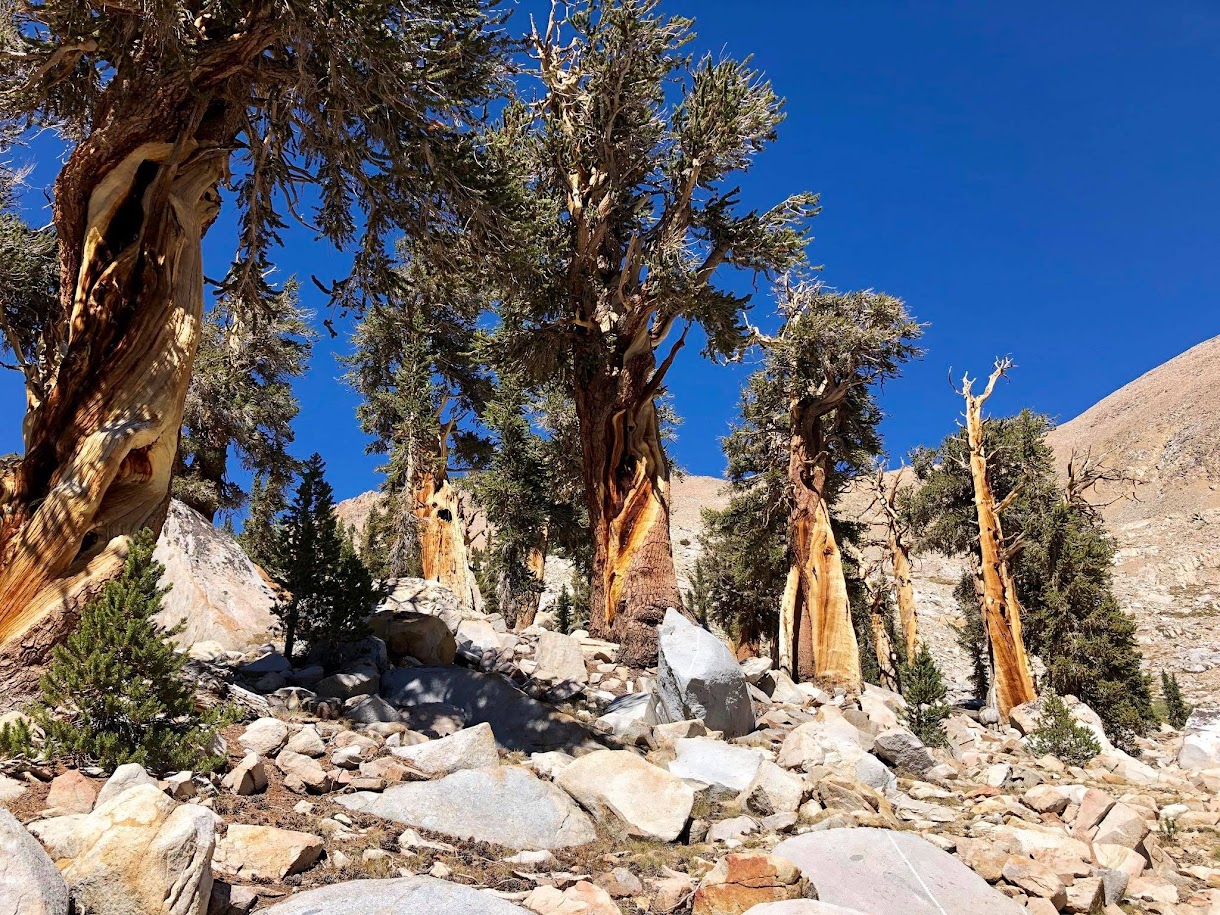 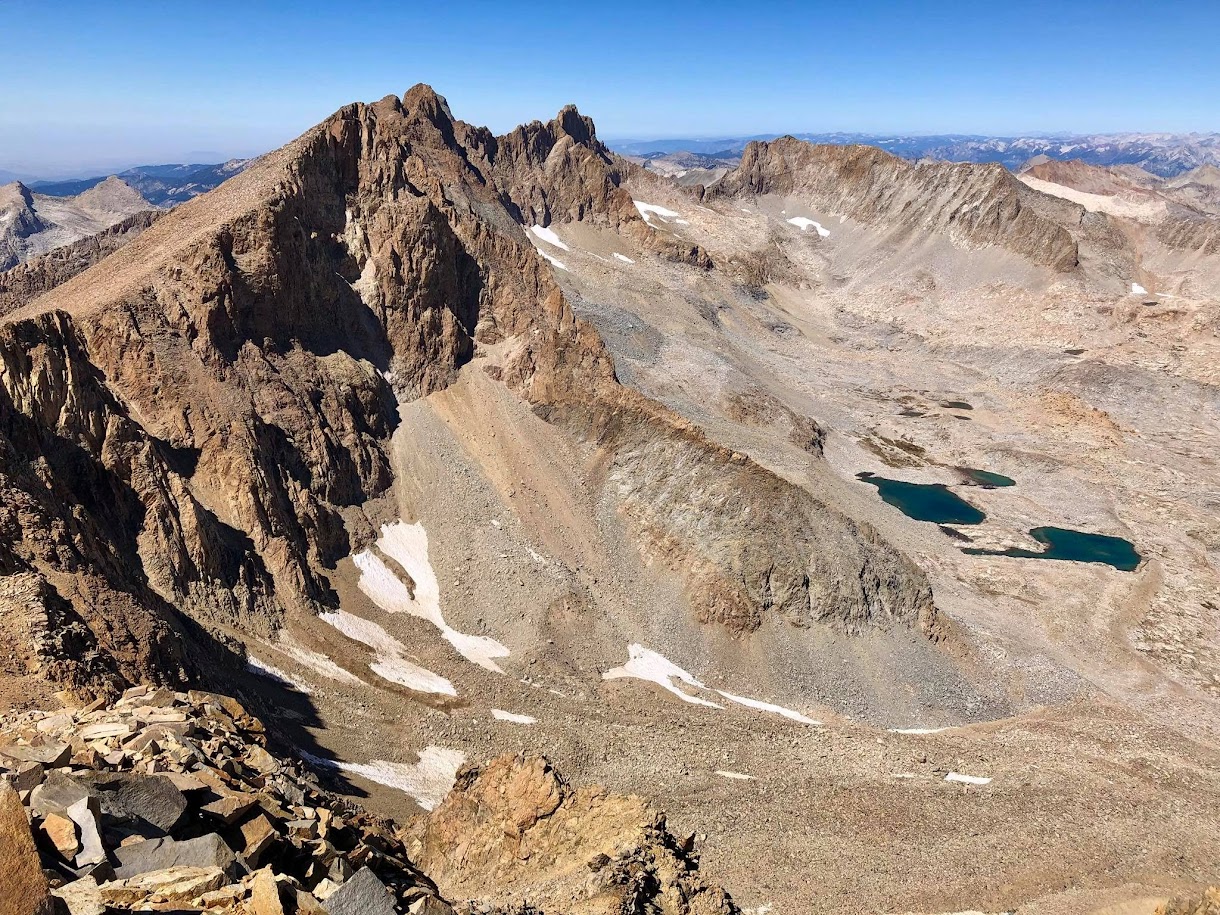 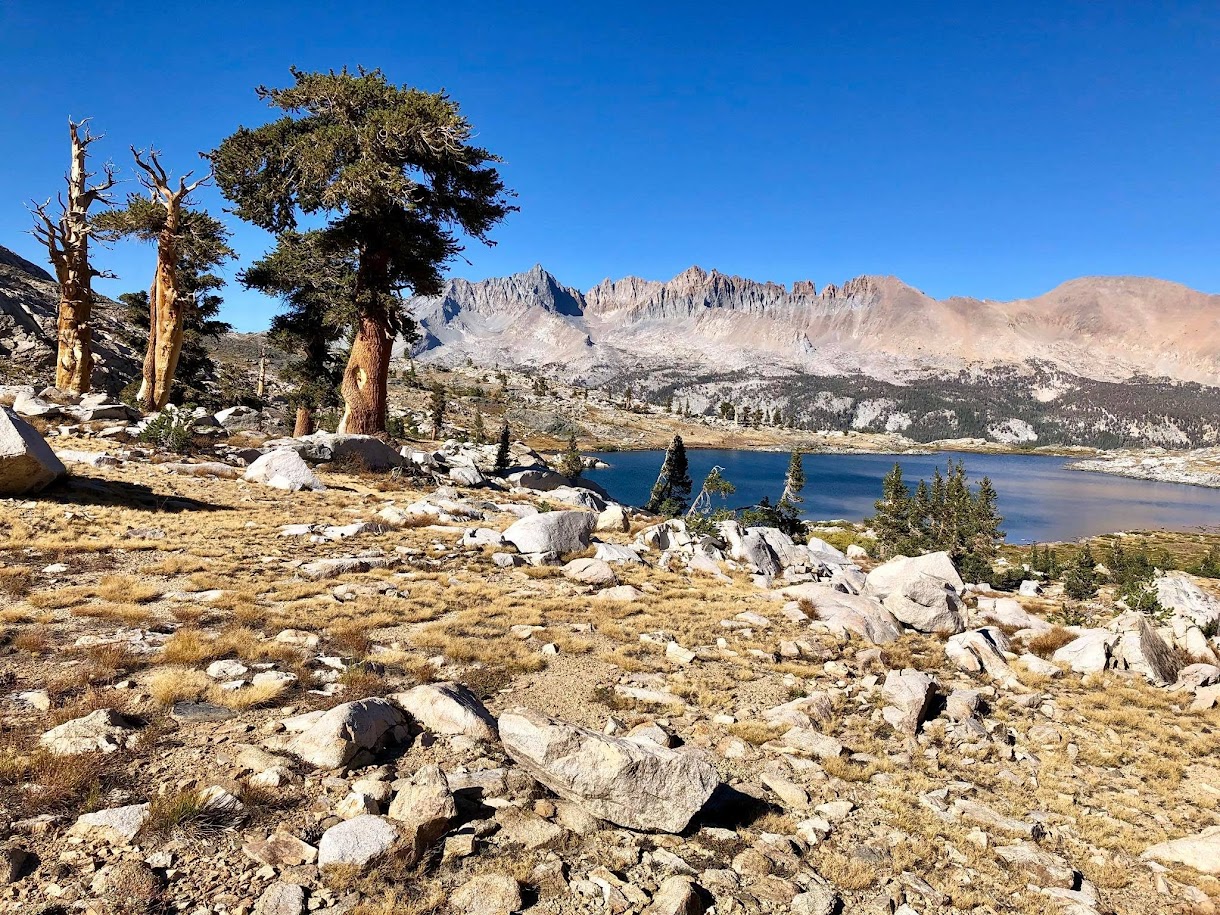 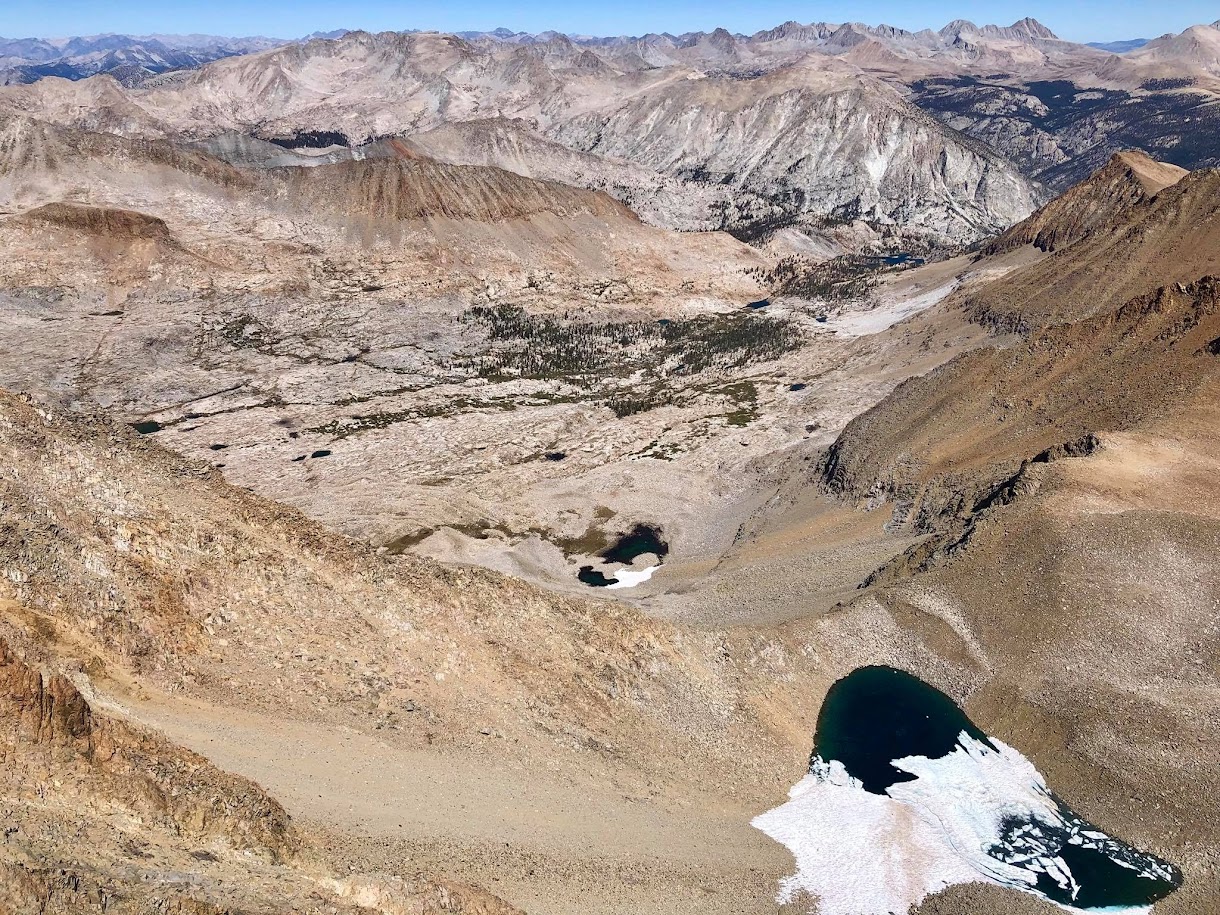 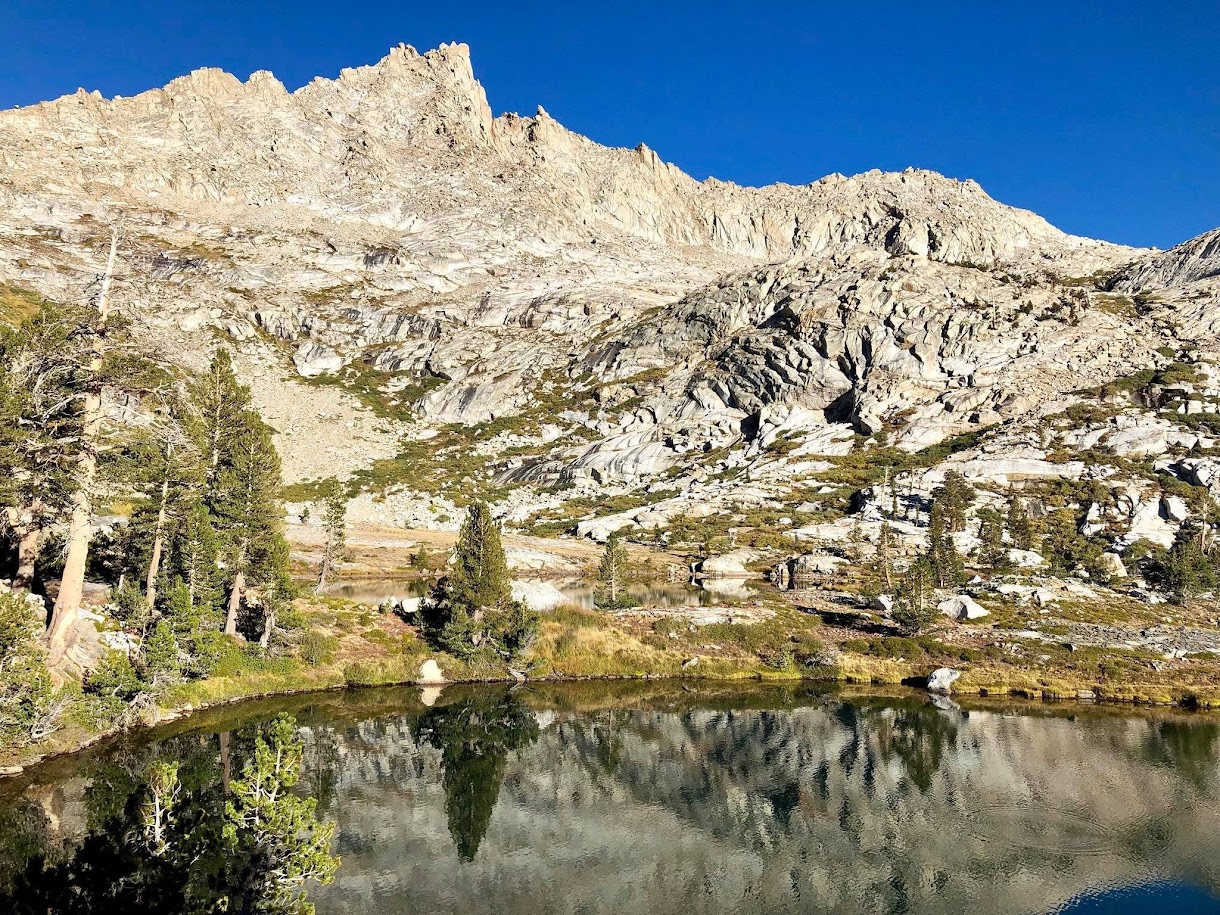 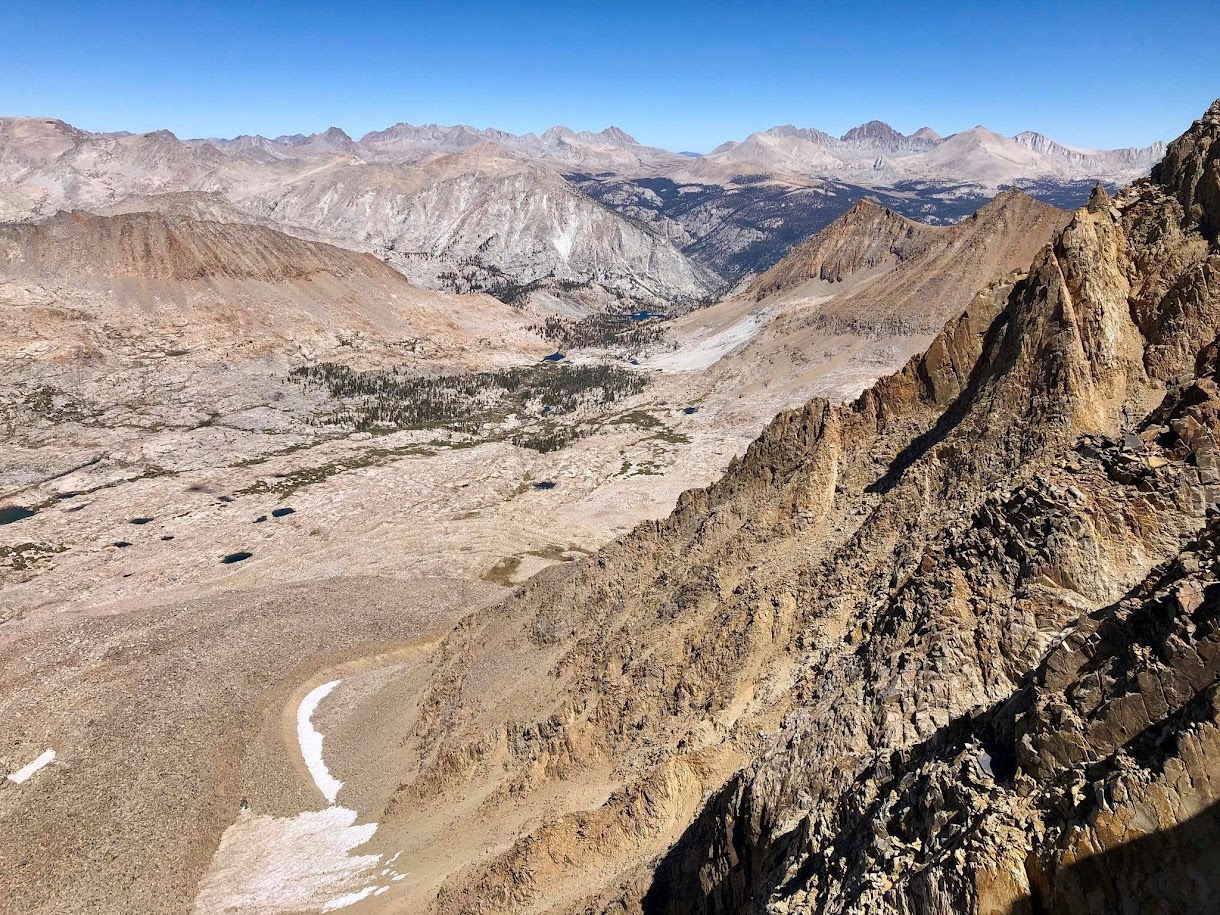 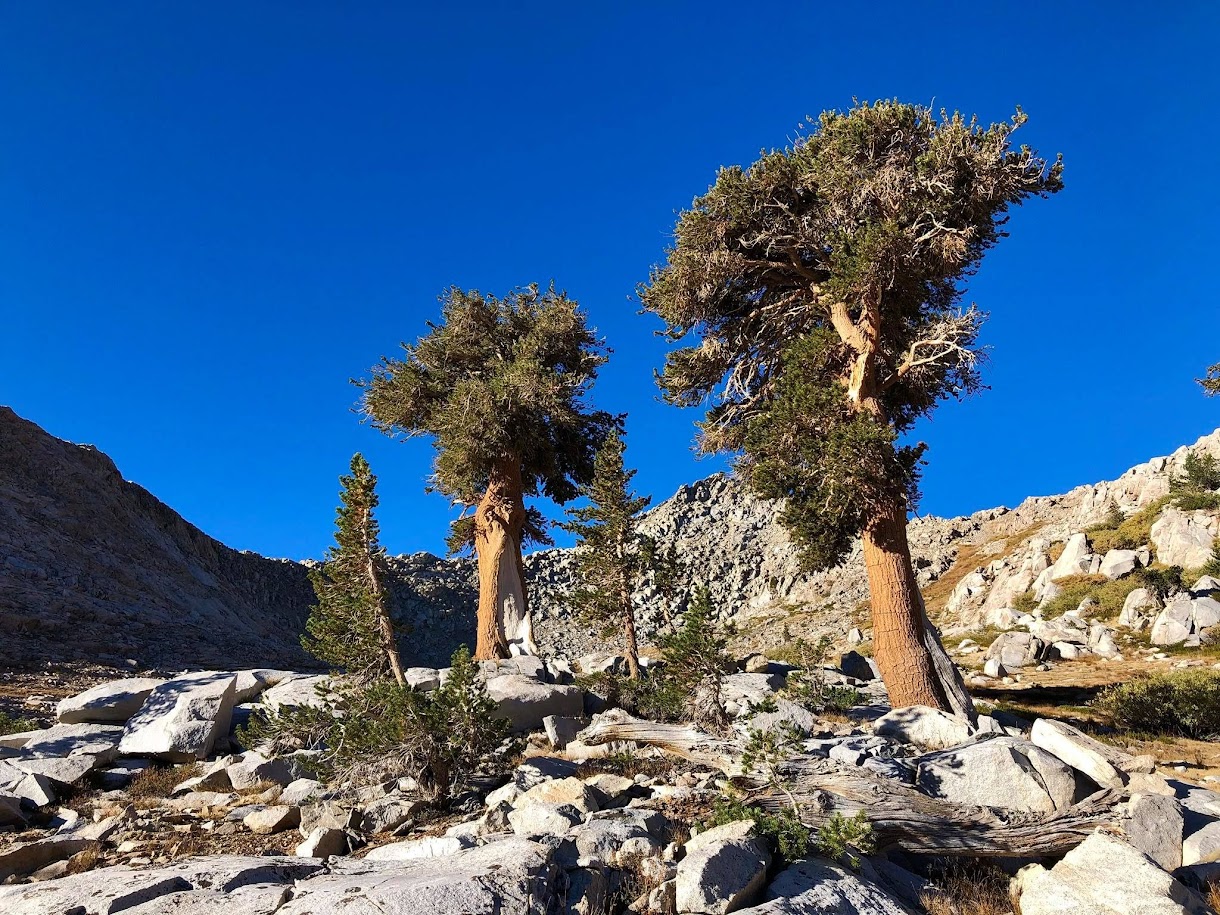 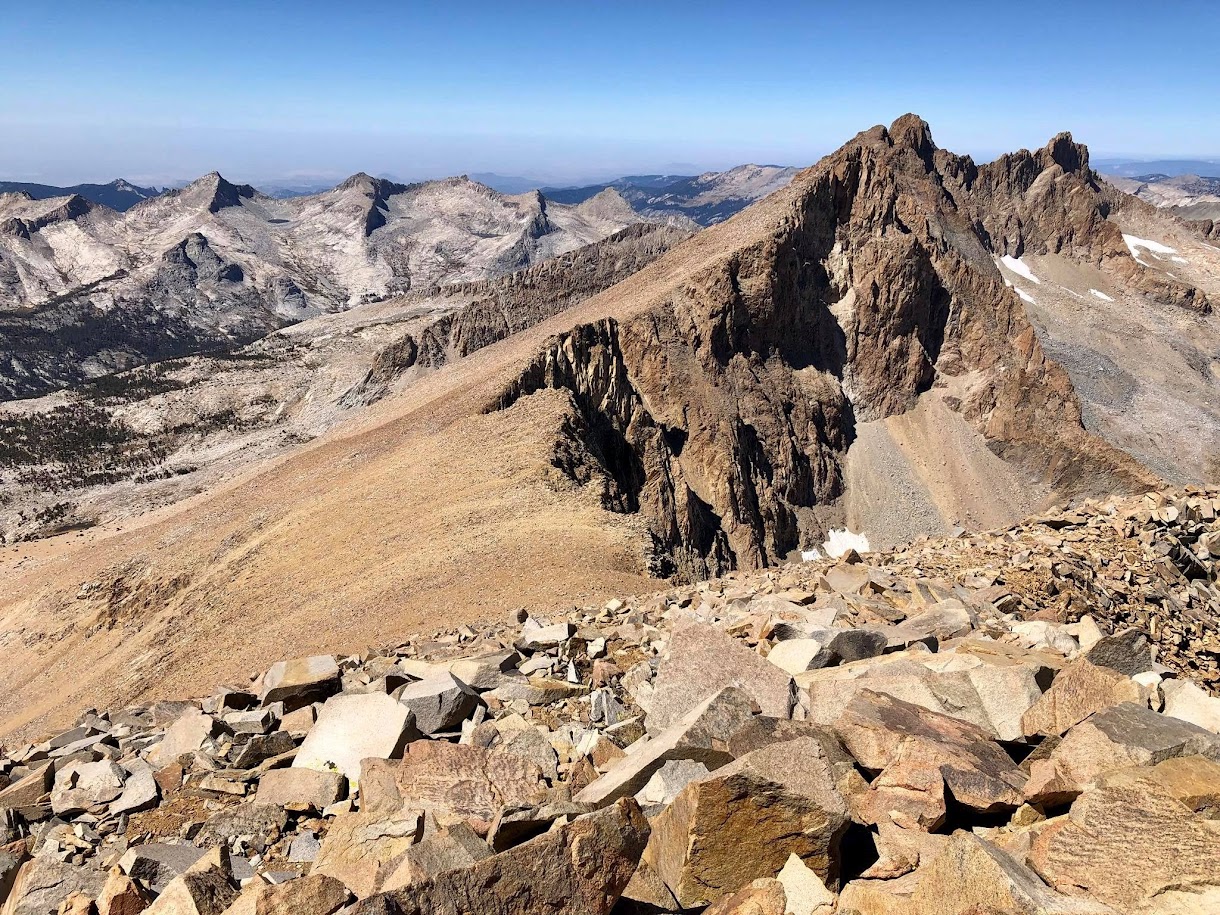 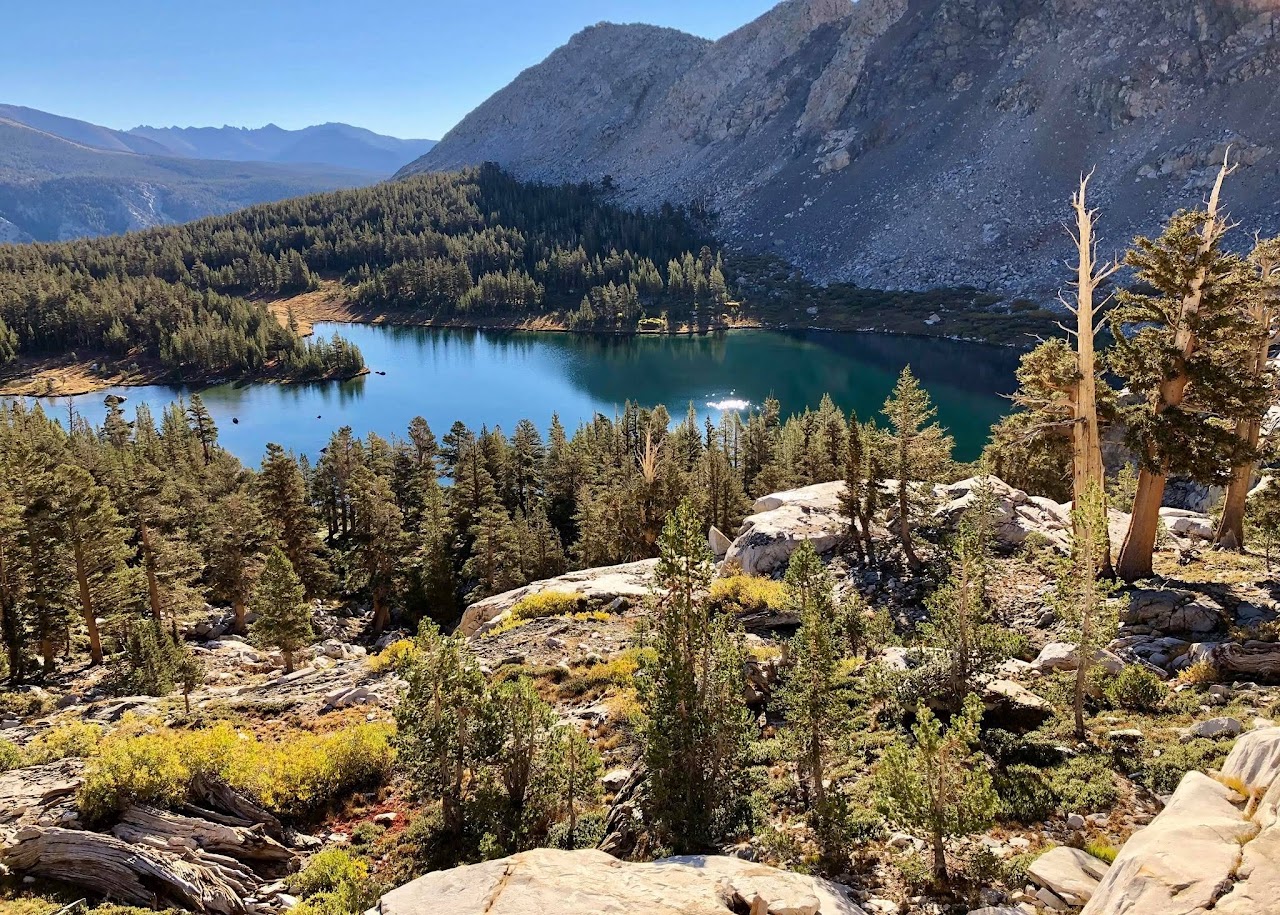 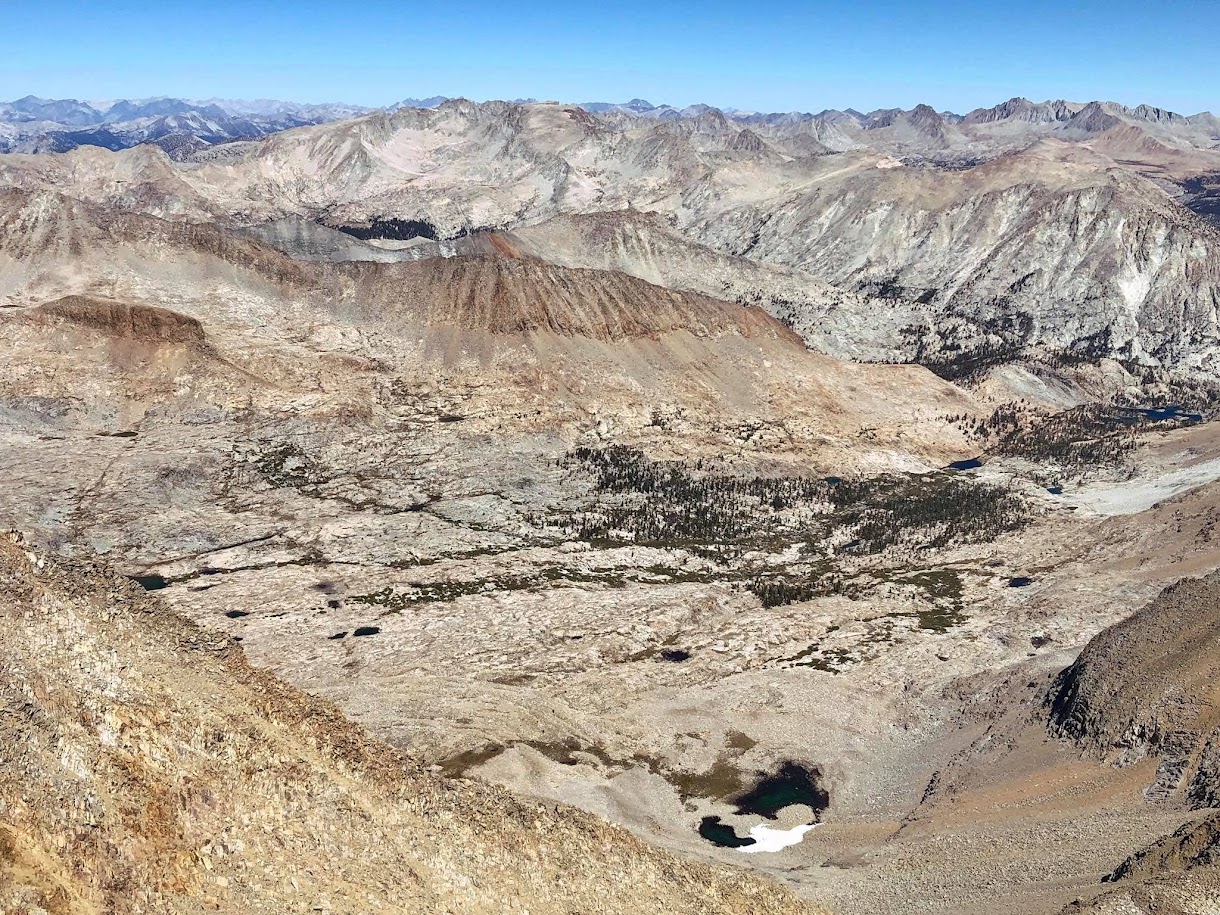 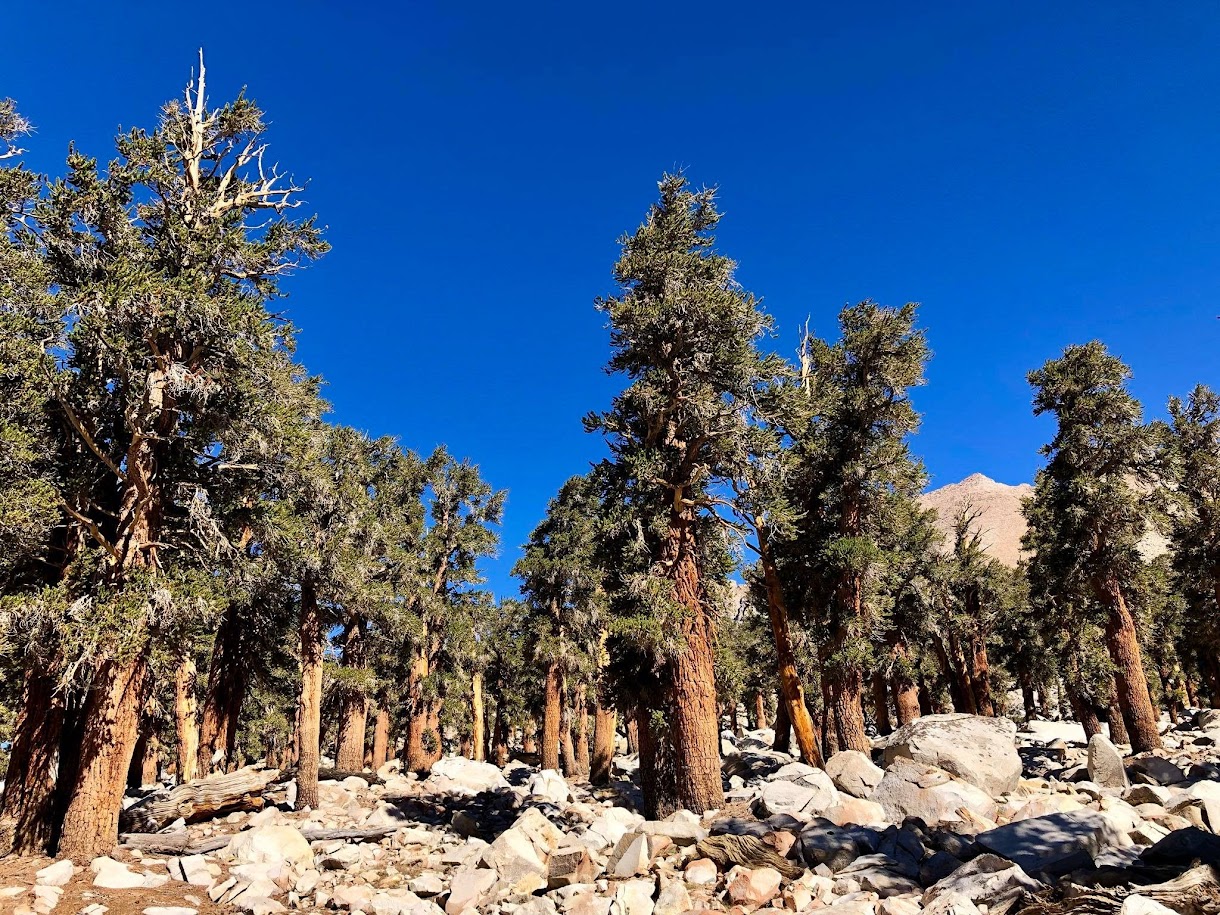 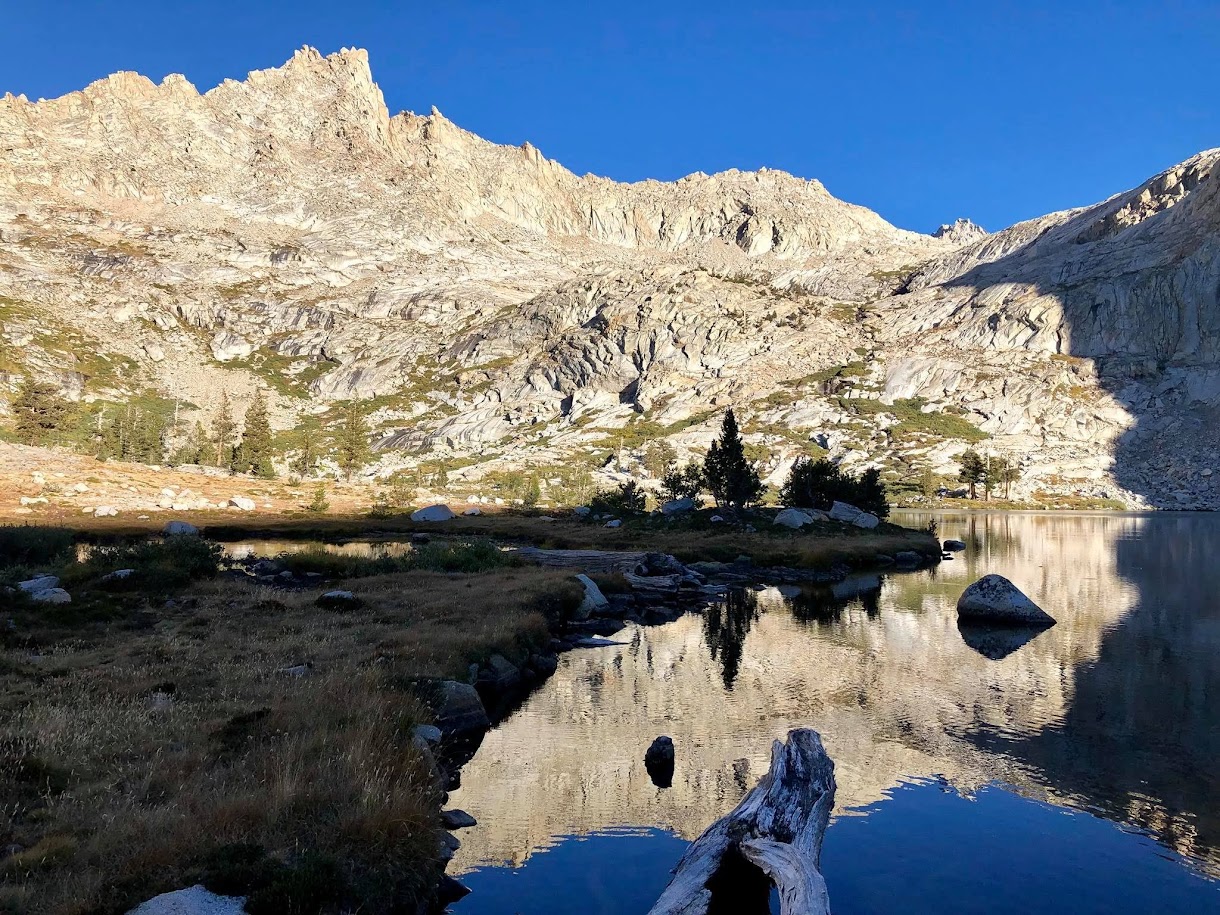 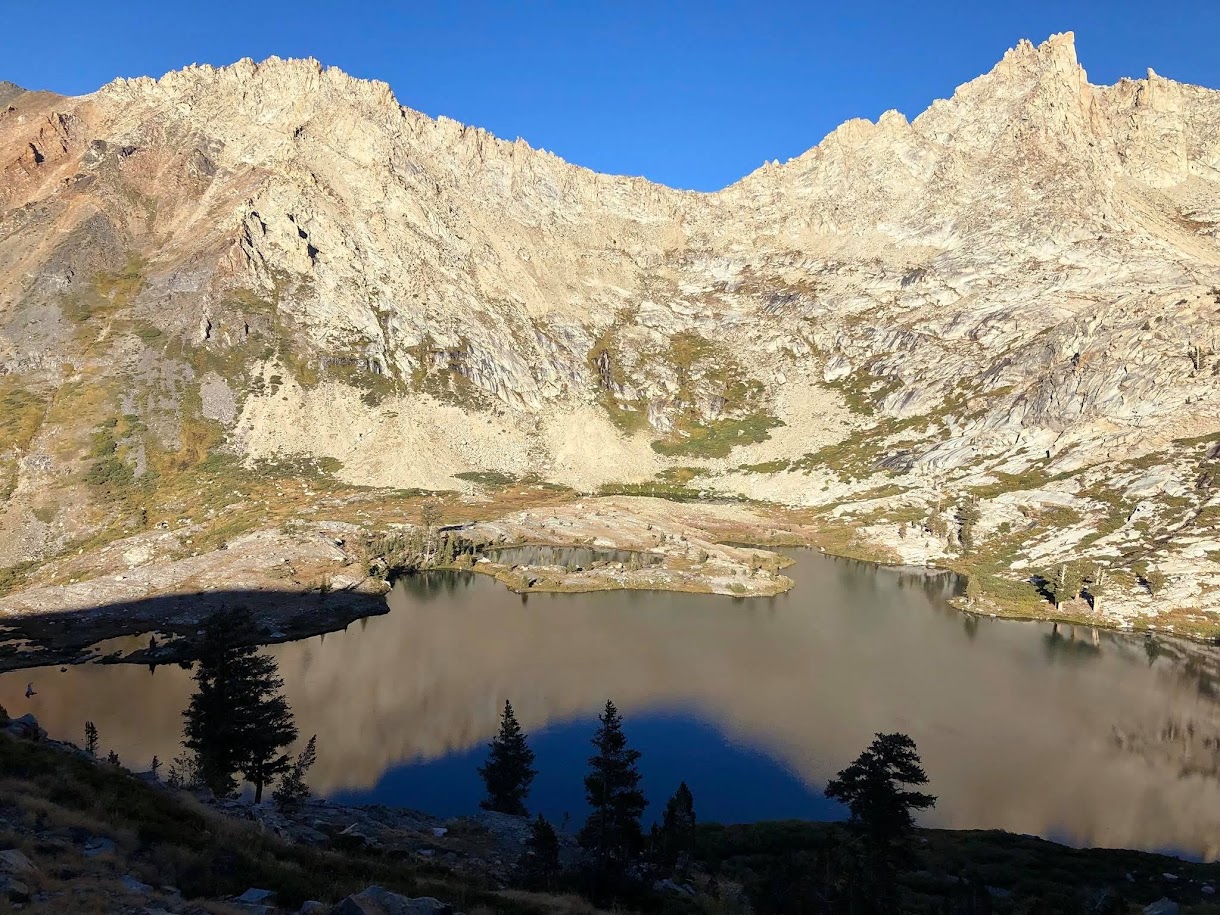 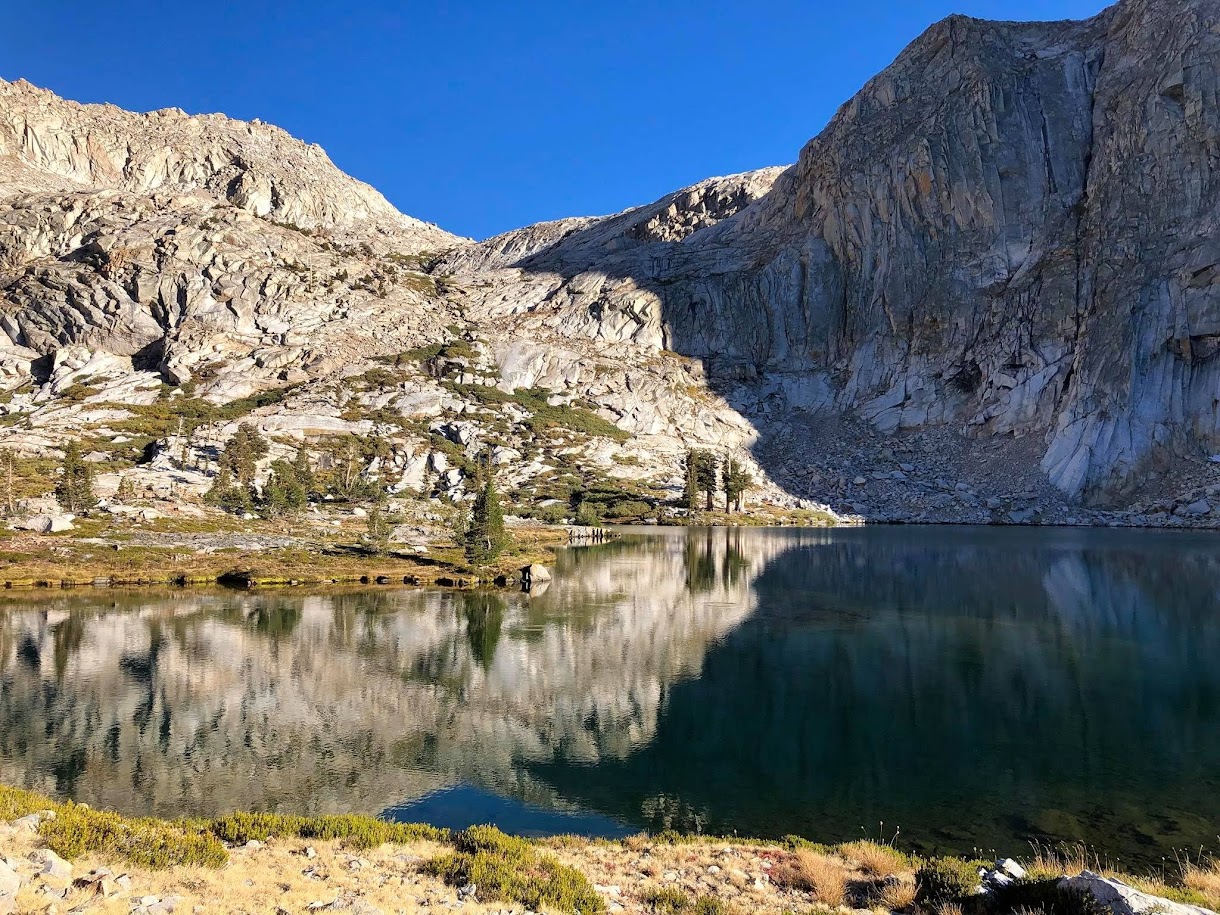 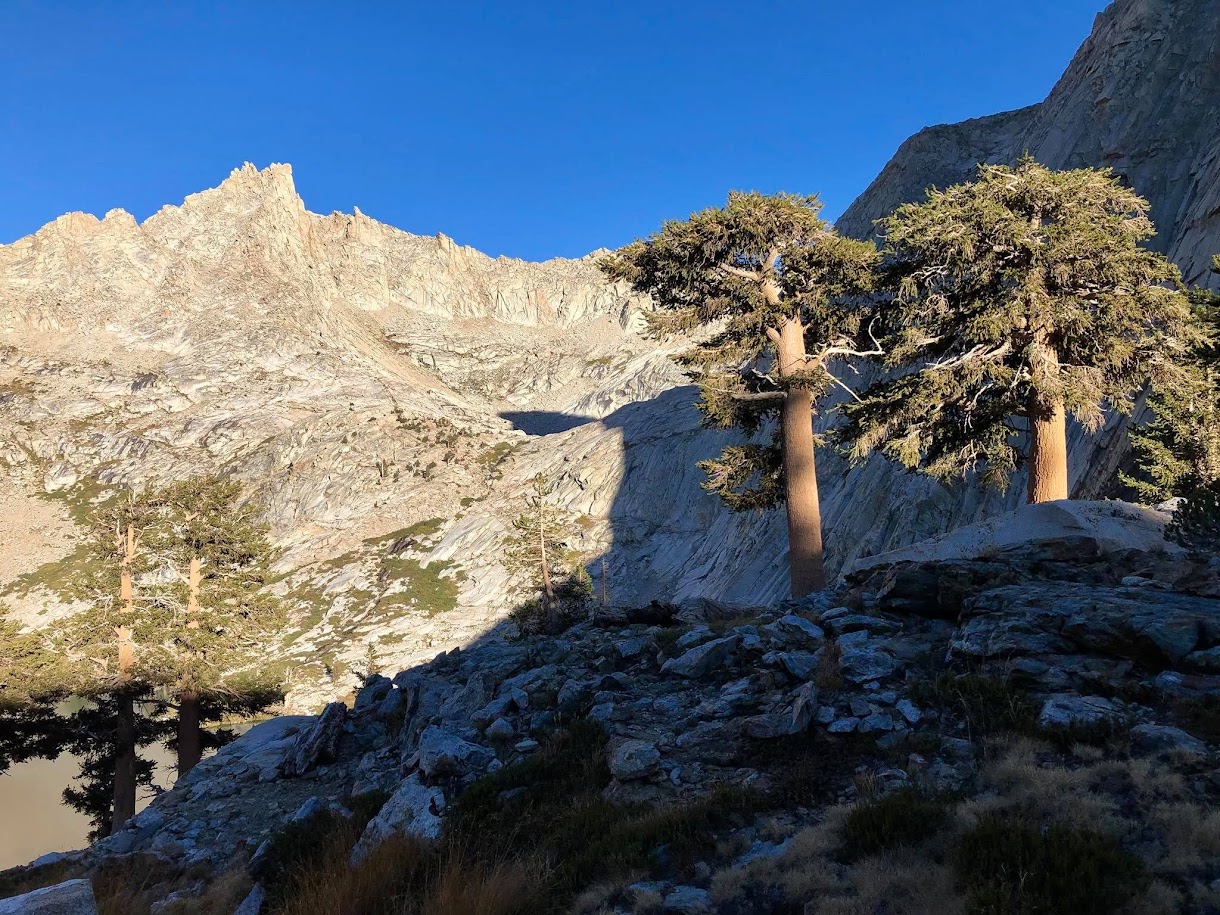 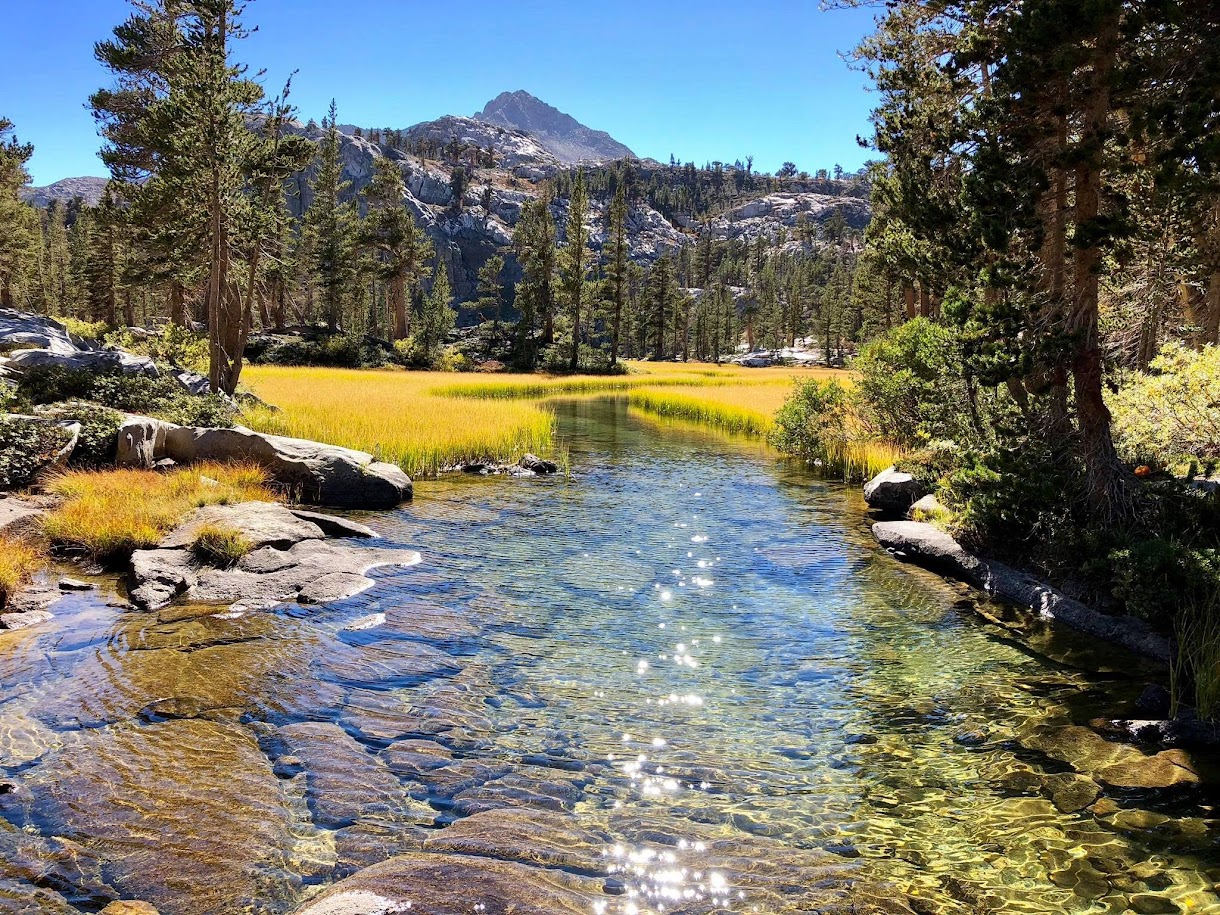 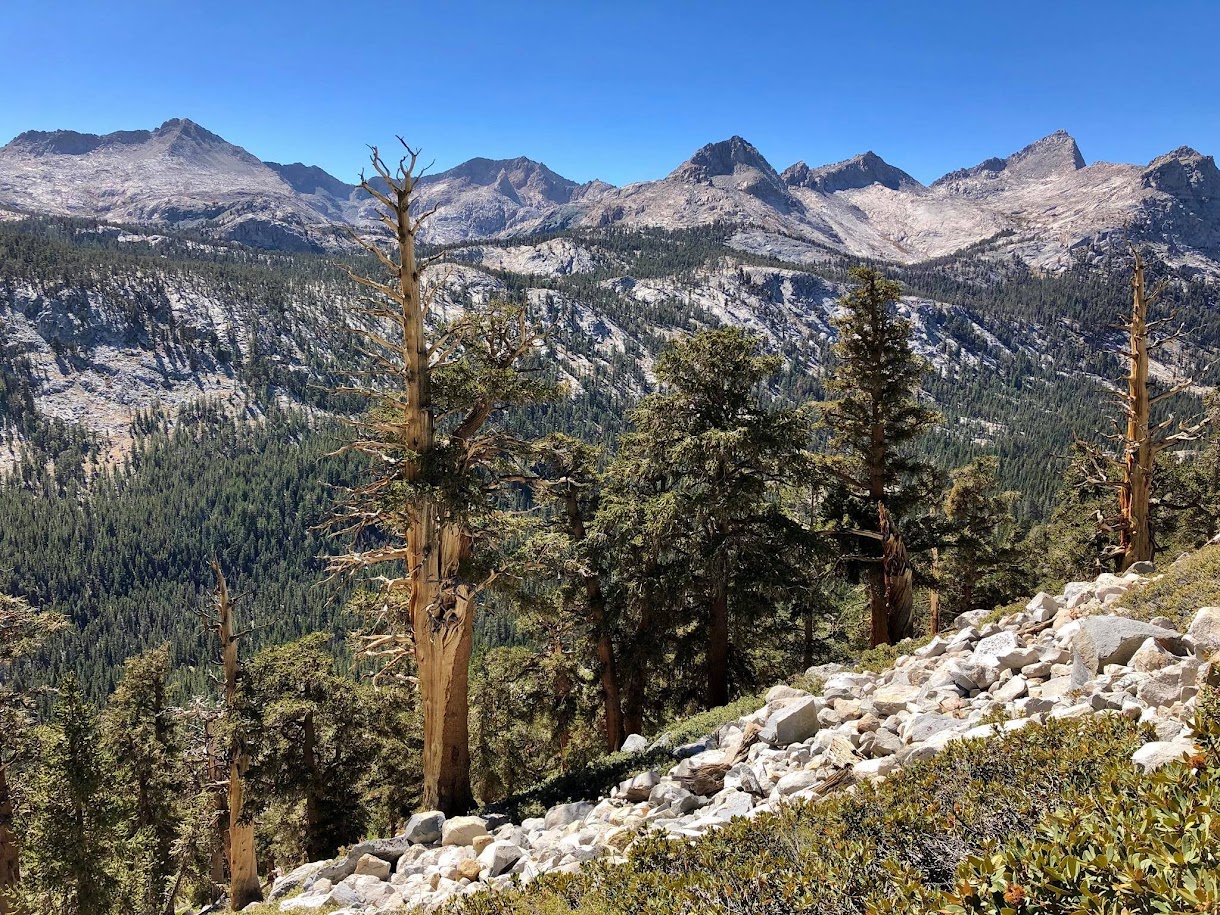 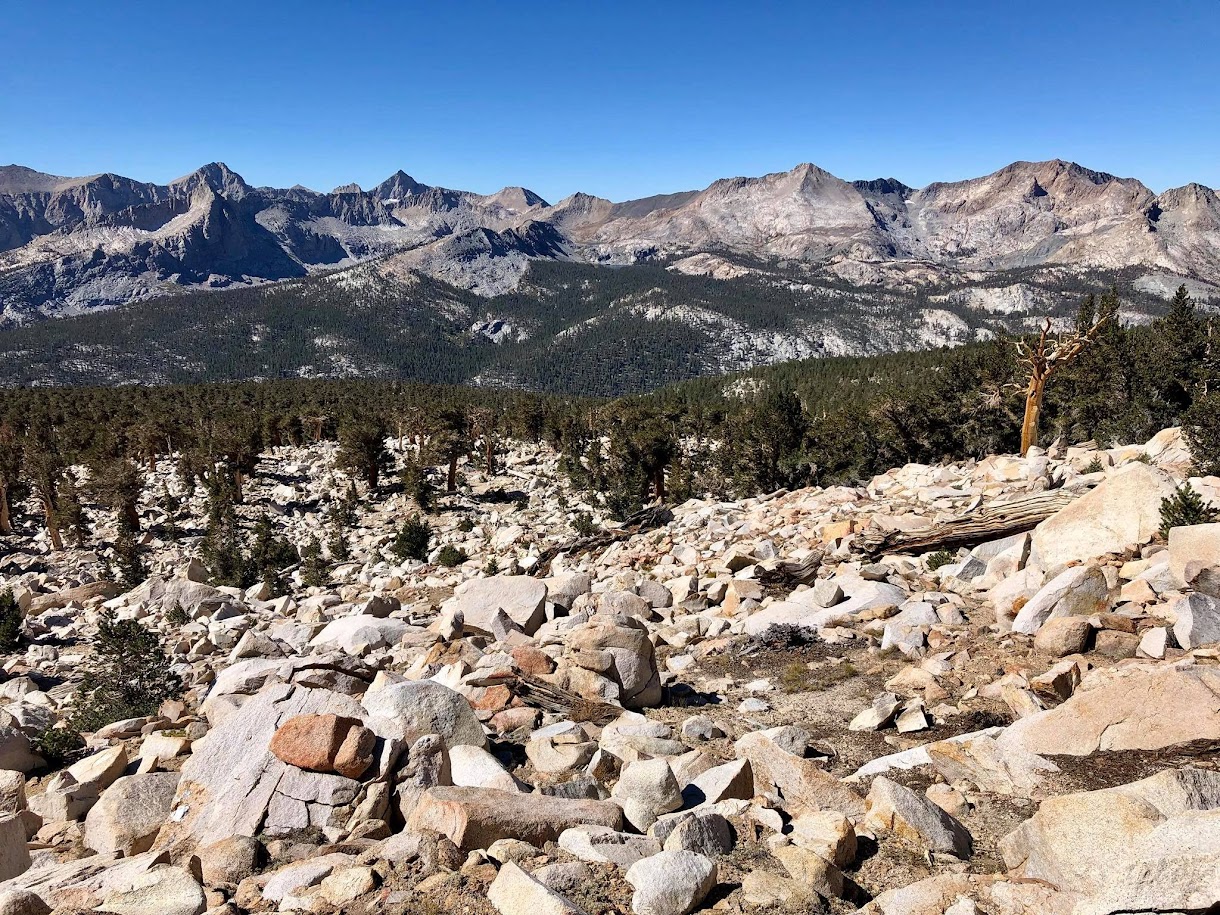 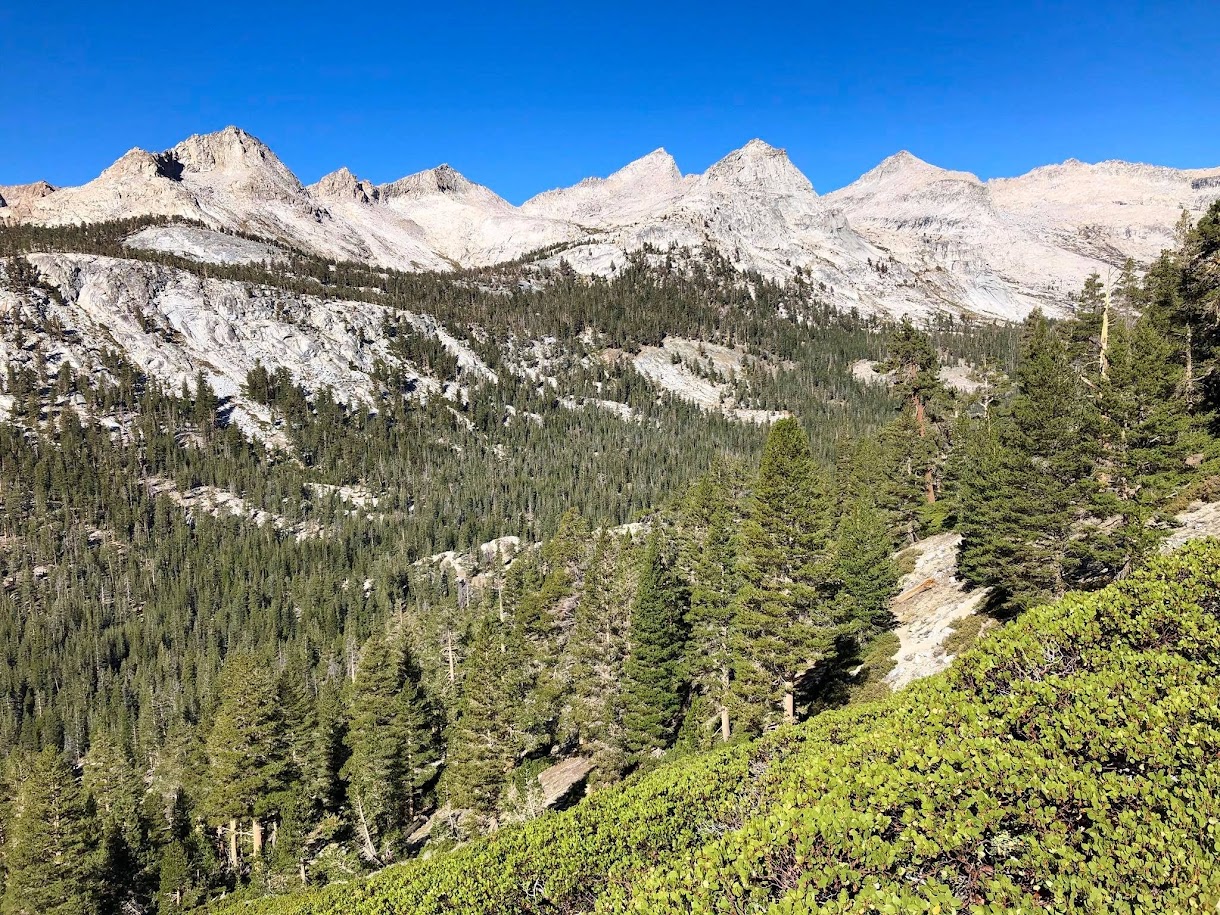 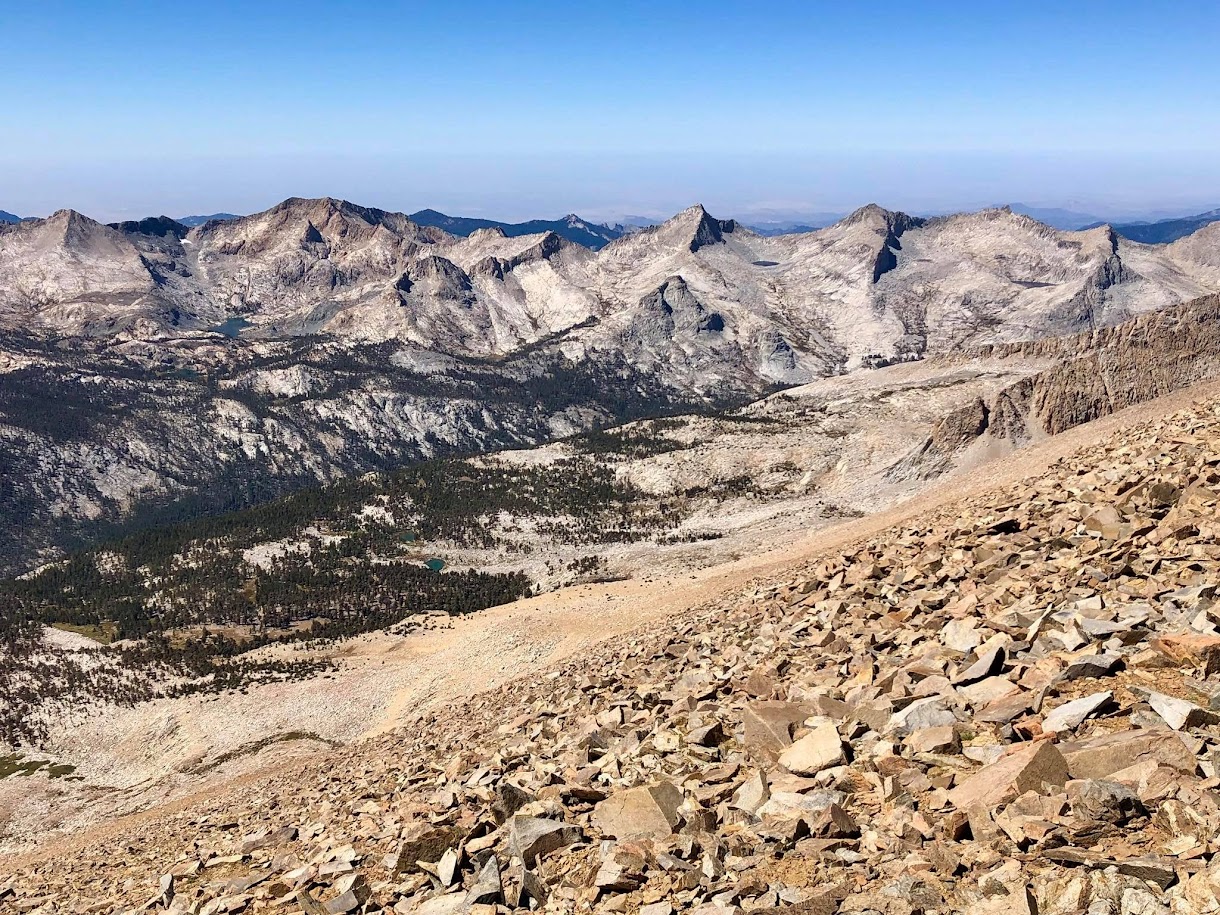 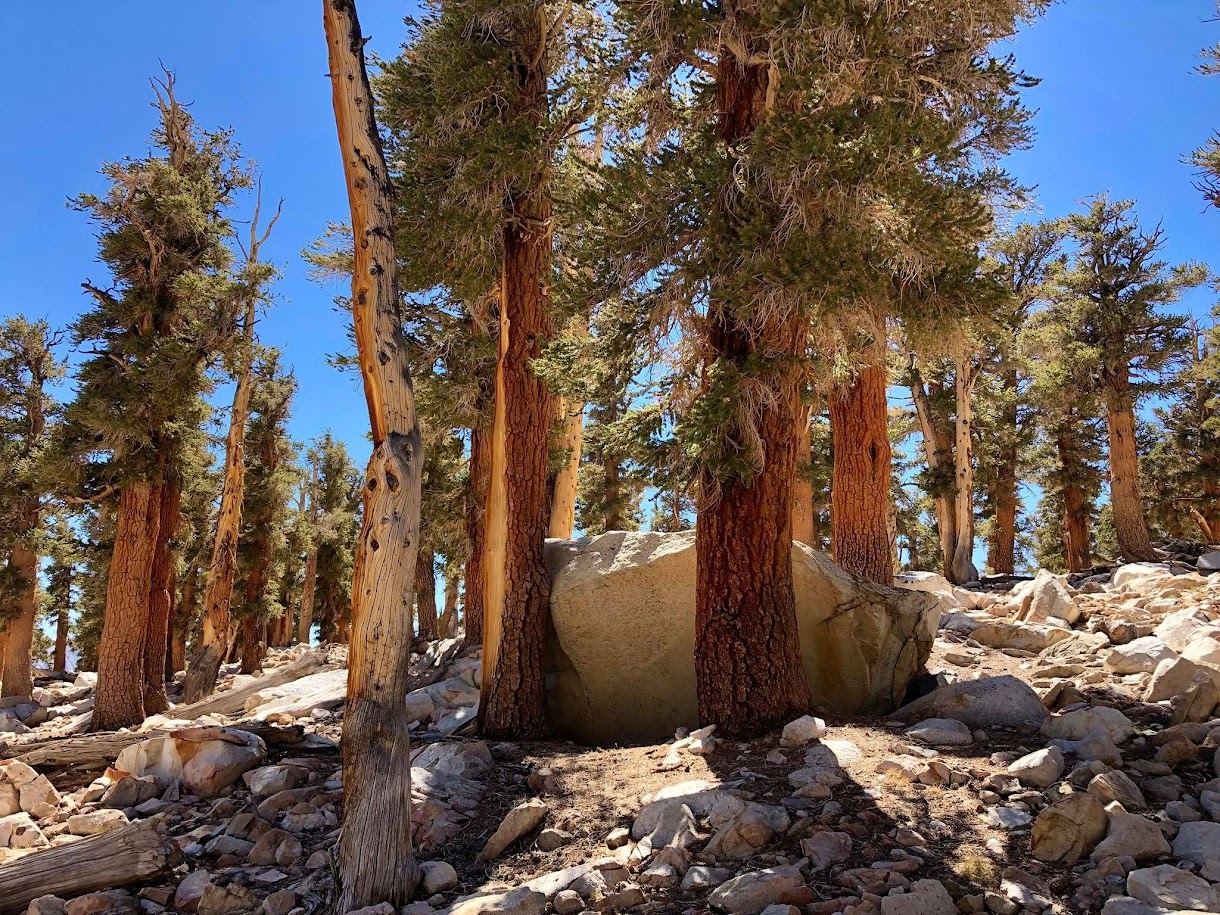 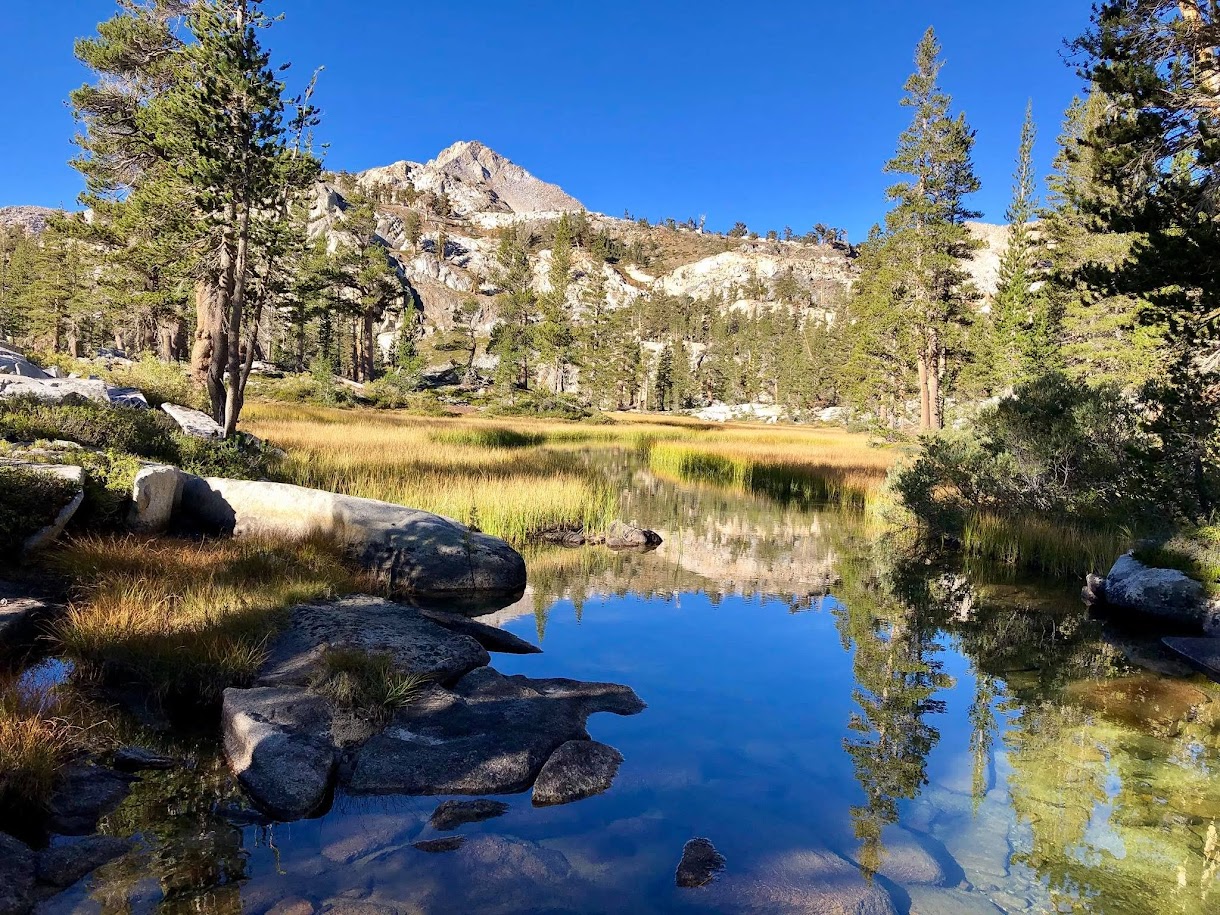 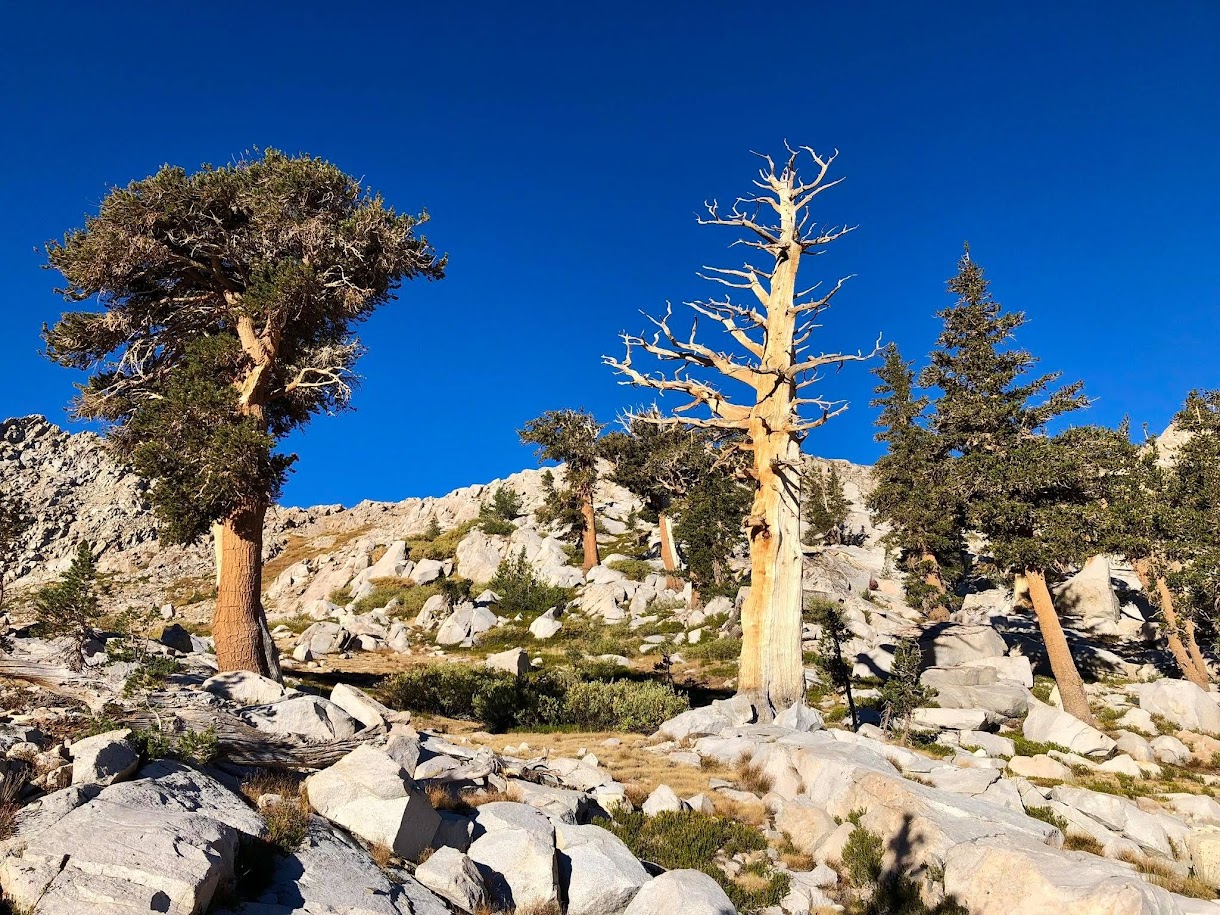 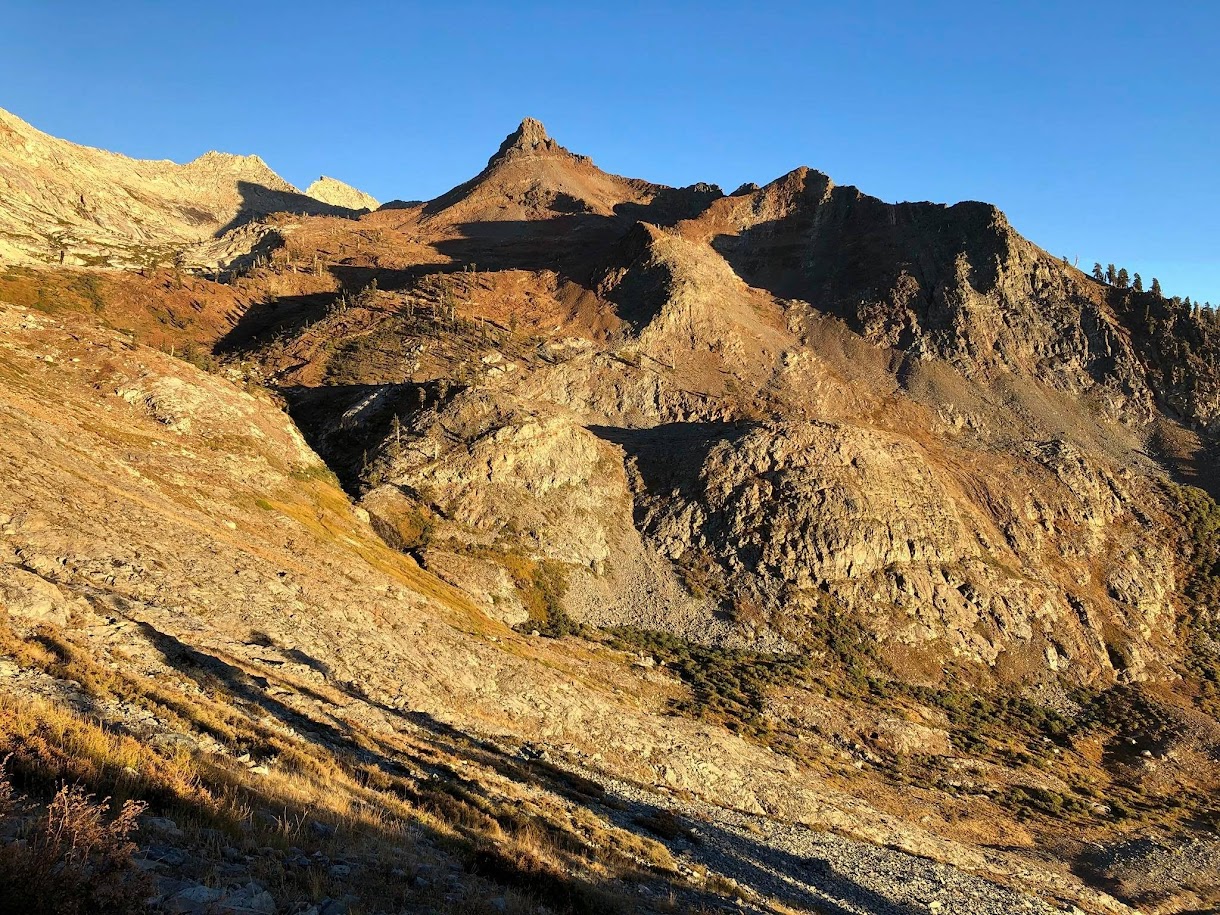