Mount Baldwin is located in arguably the most geographically fascinating region of the High Sierra. McGee Creek and Convict Creek canyons wrap around the peak and each watershed is surrounded by colorful peaks including bands of brilliant red, white and gray rock. Mount Baldwin makes a strong impression when driving along 395 and especially along the lower McGee Creek Trail as the eastern face towers above the aspen, willows and cottonwoods that fill McGee Canyon.  As Mount Baldwin lies east of the crest, the views from the summit are spectacular, and the journey to reach the summit is equally as scenic including passage through the geologically stunning Convict Canyon.  Full photo album: Google; Facebook

While not the shortest route, the standard, non-technical route to reach Mount Baldwin is via Convict Lake.  Most of this route is on trail or decent use-trail, but do not expect a wilderness freeway as both the Convict Canyon Trail and the usetrail are rugged.  Start by rounding Convict Lake and then head up Convict Canyon with a pleasant Pinyon Pine forest.  Soon pass underneath the impressive Sevehah Cliff underneath Laurel Peak.  Enormous rockslides through this portion have created some rough sections of trail that require rock hopping and following cairns.  The unique geology only becomes more impressive as one ascends Convict Canyon with striking cliffs and buttress on both sides of the canyon. The cliffs have unique striations, rock formations and dazzling colors.  Evidence of nature’s power is evident throughout the canyon with avalanche debris, immense rock slides and obliterated trail infrastructure in spots.  The trail crosses Convict Creek at a bridge that was completely wiped away from its foundation. This is therefore not a viable early season route when the creek is effectively more like a river raging with snowmelt.  Wait until mid summer or later when the creek is safely fordable.

Above the headwall of the rugged Convict Canyon the chaotic nature of the foregoing terrain suddenly becomes subdued as one reaches the charming Mildred Lake with Red Slate Mountain providing a striking backdrop. Here, the once boisterous Convict Creek passes through a long and flat marshy valley before resuming its ascent up the slopes of Red Slate Mountain. From Mildred Lake, leave the designated trail and take a use trail  up the long canyon. The usetrail can also be completely submerged in water earlier in the season. At a small tributary that leads up to Mount Baldwin, turn east (left) and continue following the use trail, which is faint in spots.  Grassy meadows with whitebark pines transition to a moonscape of dirt and rock as one climbs into a hidden bowl.  Cross the bowl and continue climbing up slabs and dirt to reach Mount Baldwin’s NW ridge. The usetrail is faint to nonexistent at times through this section, but the usetrail becomes more obvious as one ascends the NW Ridge. At the about 11,200 feet the usetrail leaves the ridge and traverses across a face to an old mine. The final climb to the mine is steep and you can take your pick of a loose slope or a class 3 scramble.  Only a few pieces of detritus provide clues of the mine’s existence. 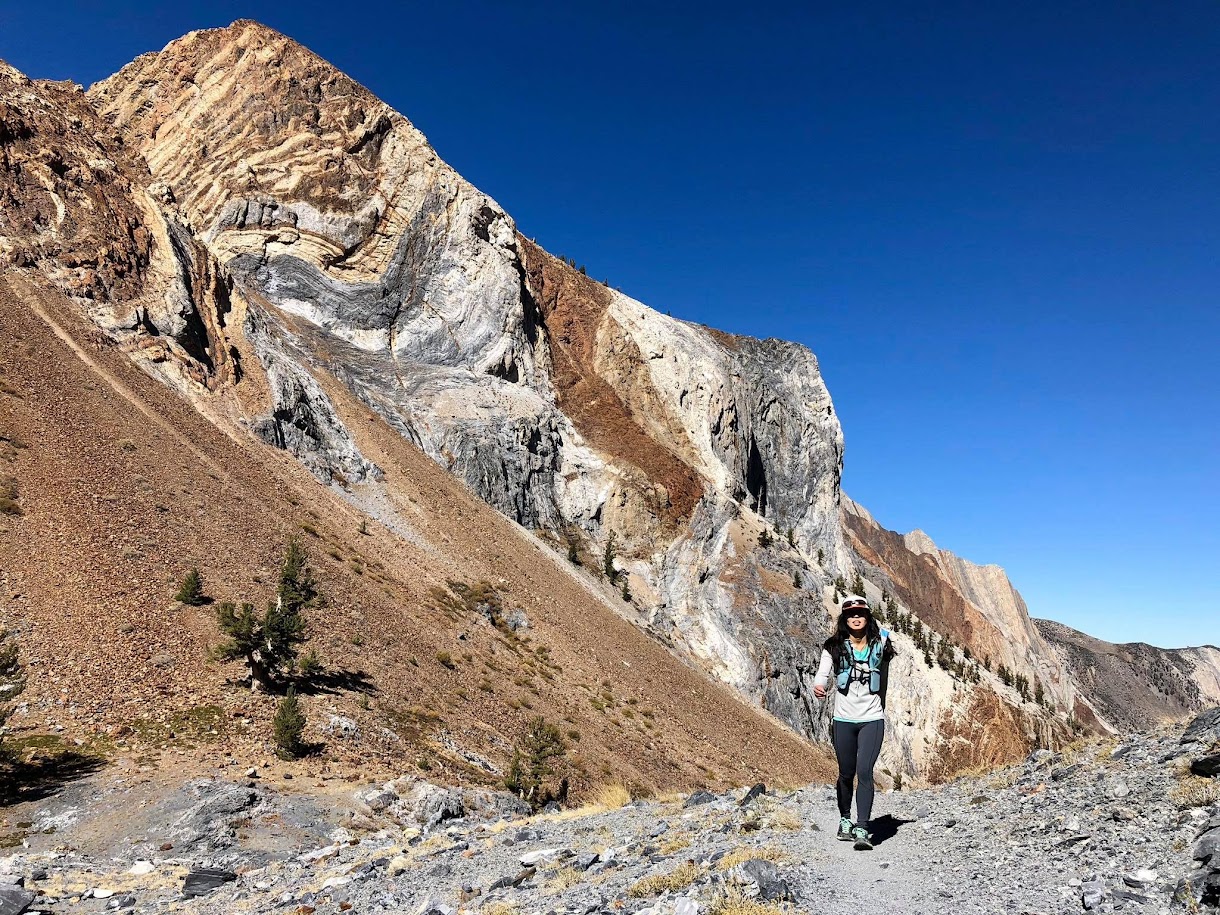 From the mine, head right around a corner and continue ascending up to the upper slopes of Mount Baldwin. The final push to the summit is a bit of a slog in sandy soil. From the summit enjoy a spectacular 360 degree panorama. Nearby is Red Slate Mountain with its spectacular north face.  Just beyond is Red & White Mountain followed by the Mono Divide and Bear Creek Spire group.  To the north one can see the Ritter Range.  A series of lakes are laid out underneath Mount Baldwin including Constance Lake, Bright Dot Lake, Bighorn Lake, and the expansive Dorthy Lake. When combined with the colorful geology characteristic of the region, it’s a unique and wonderful setting. 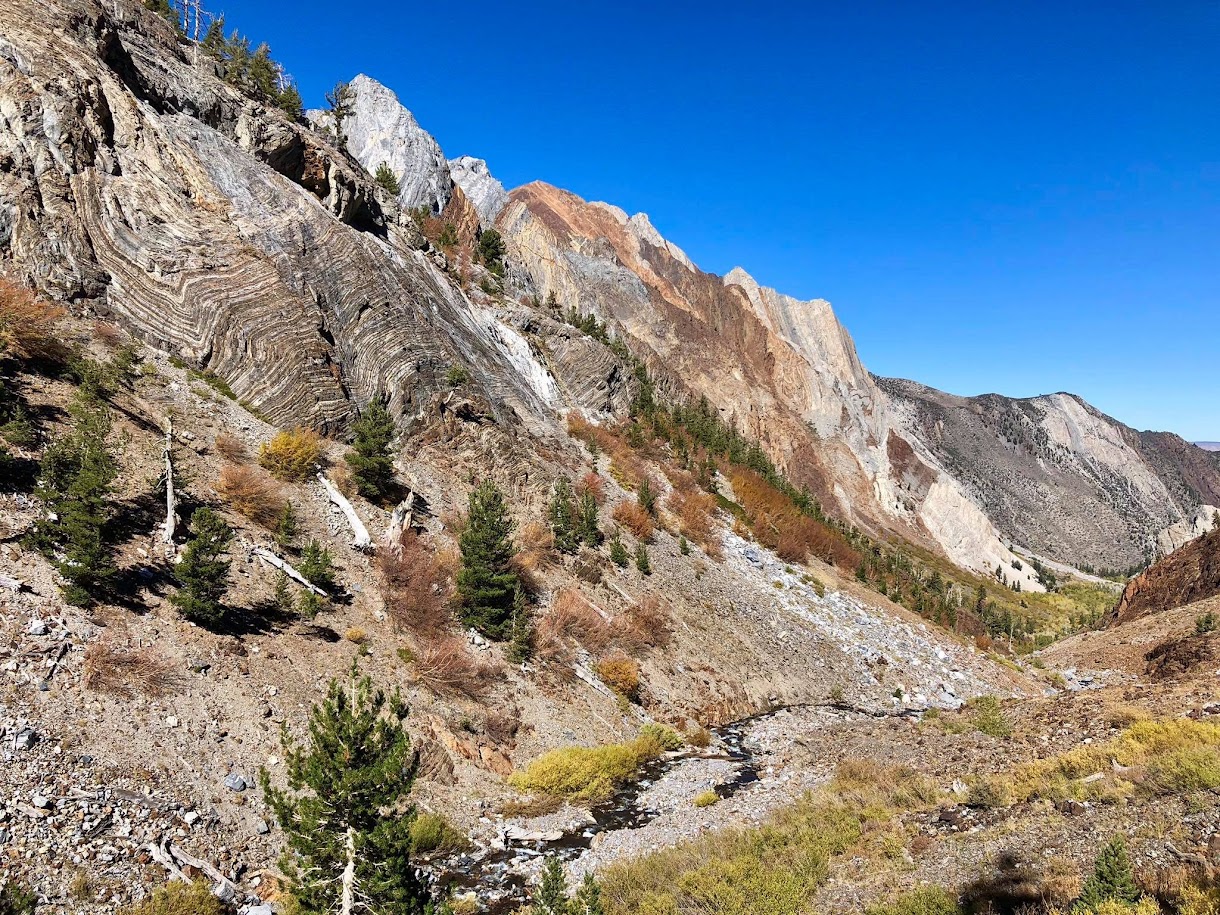 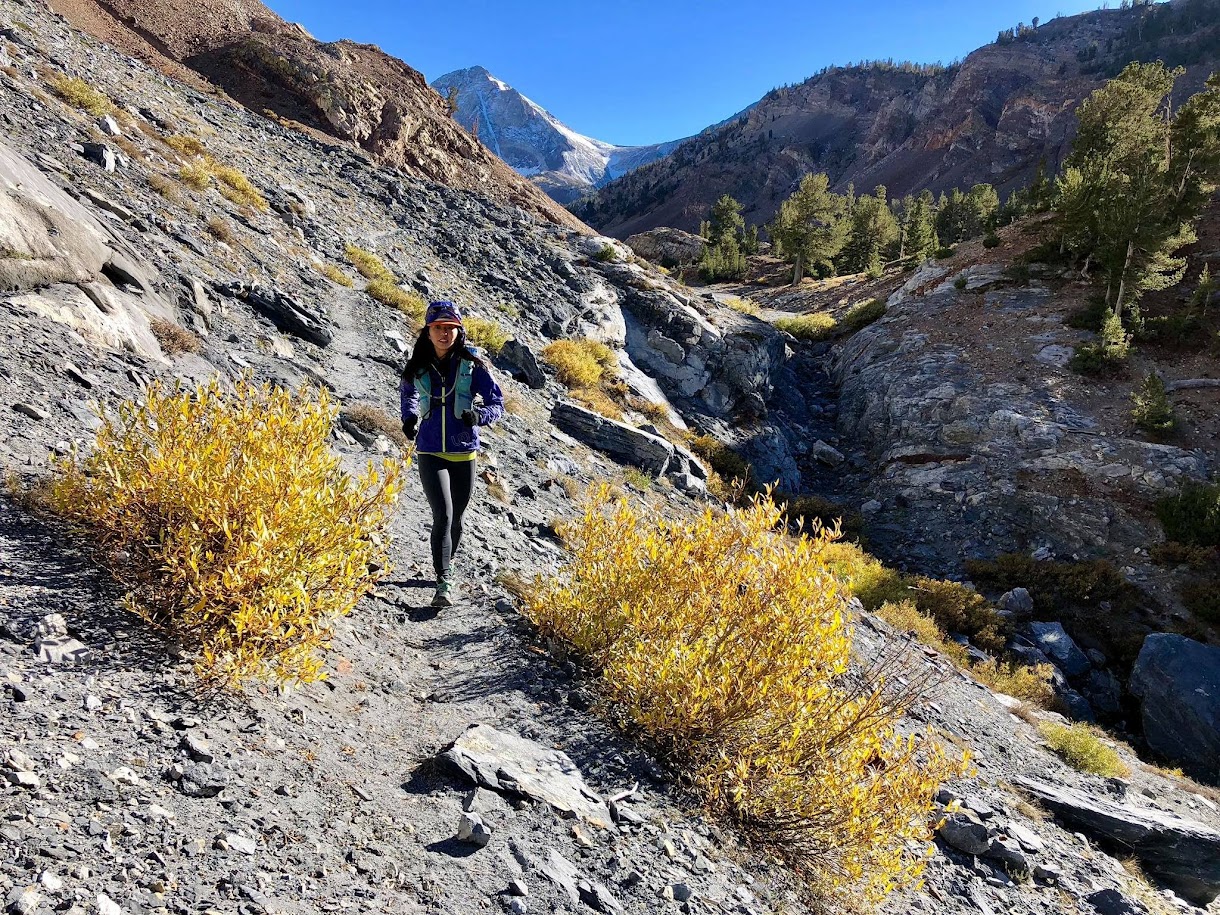 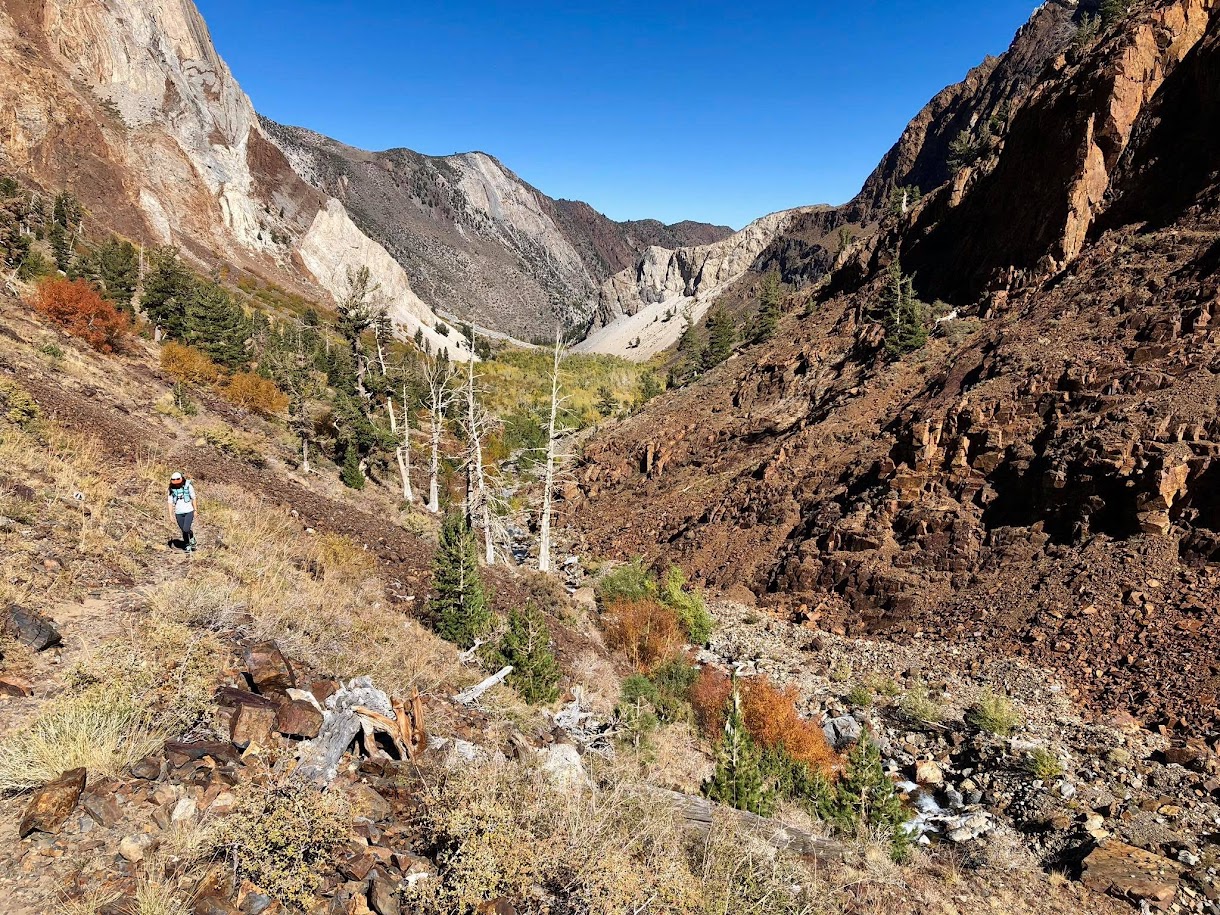 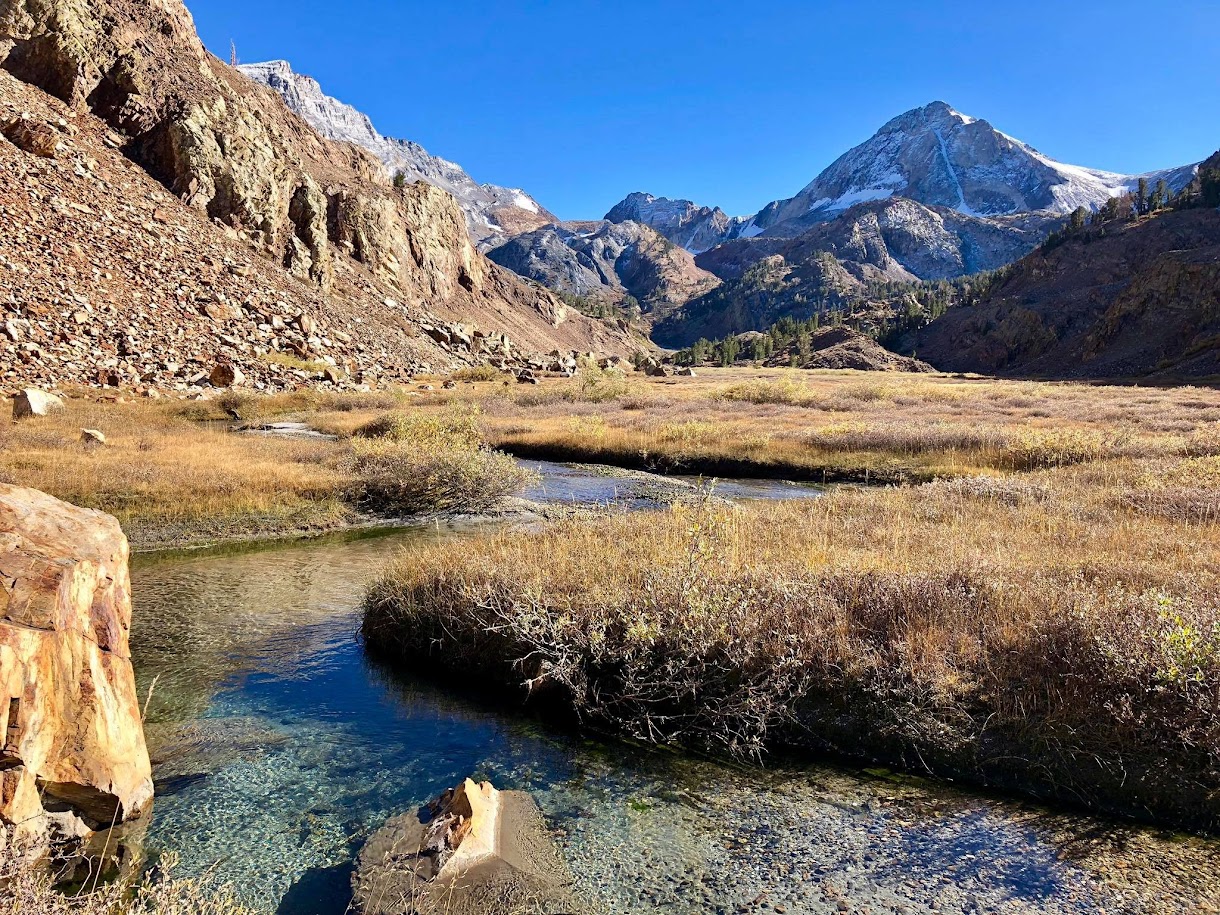 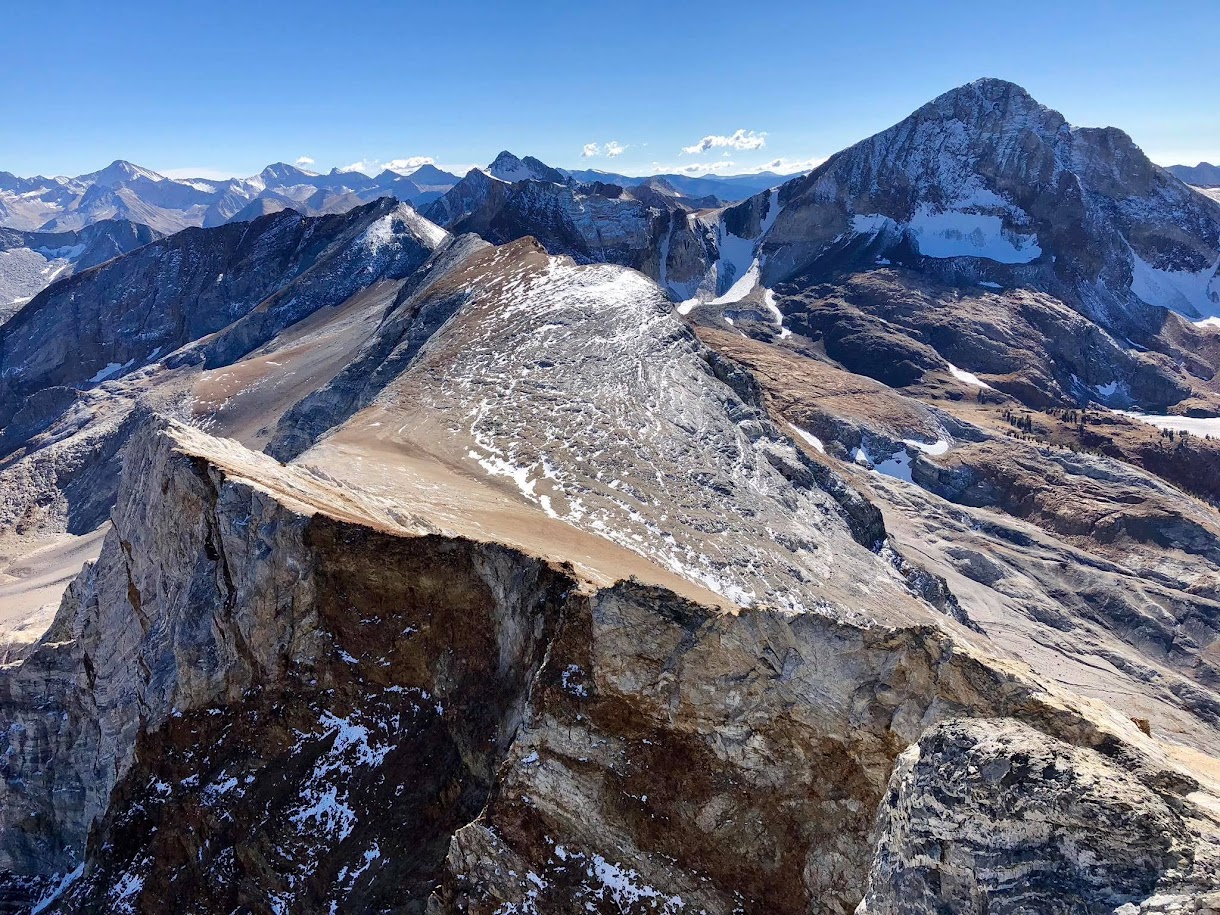 Red Slate Mountain on the Right 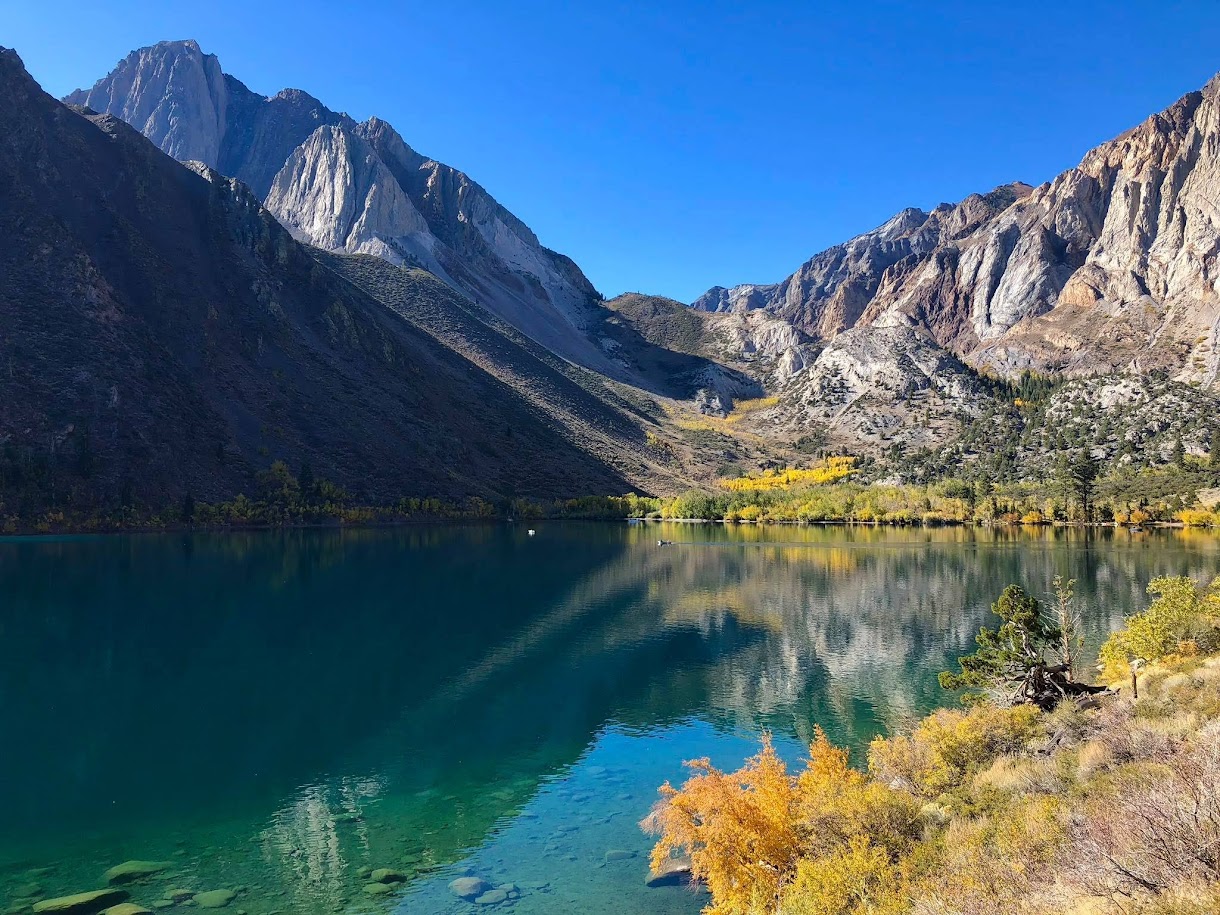 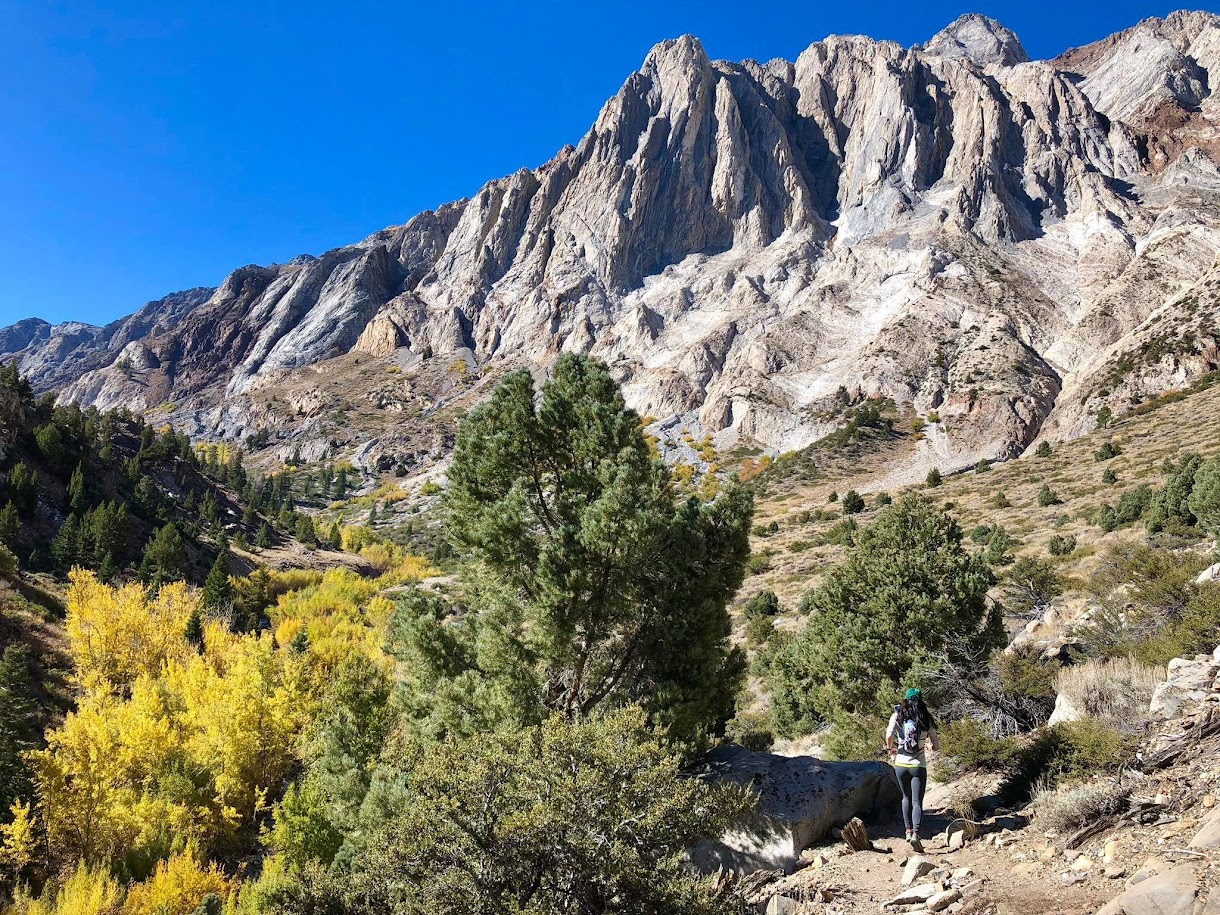 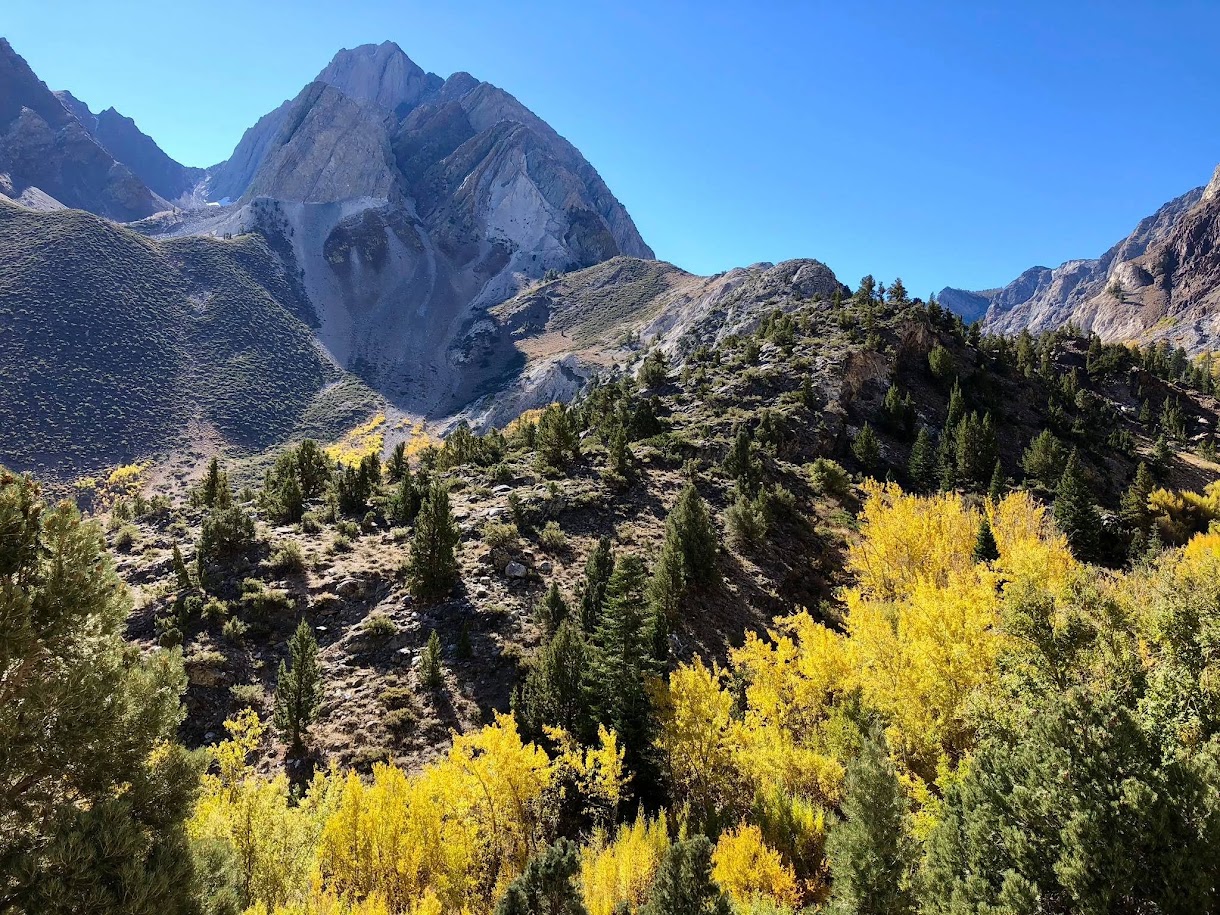 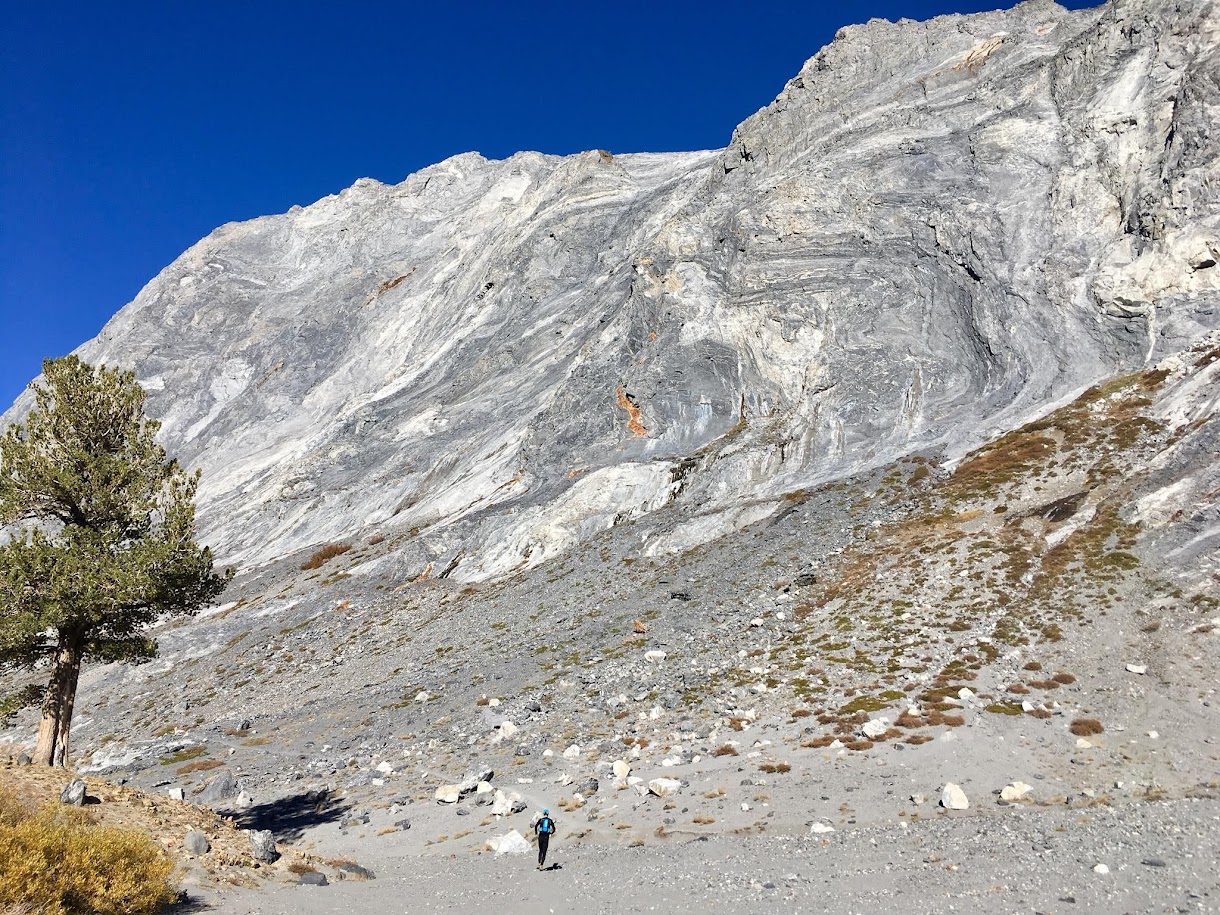 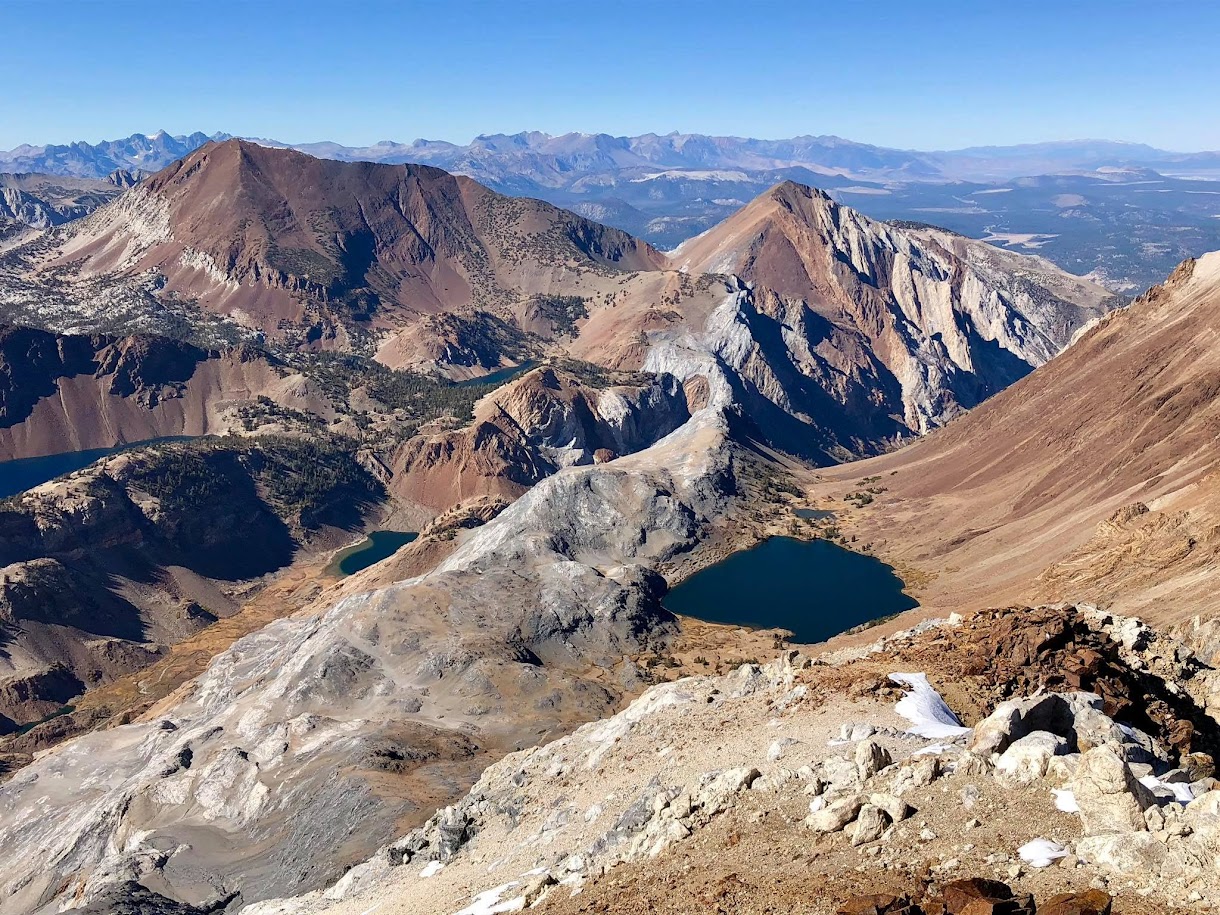 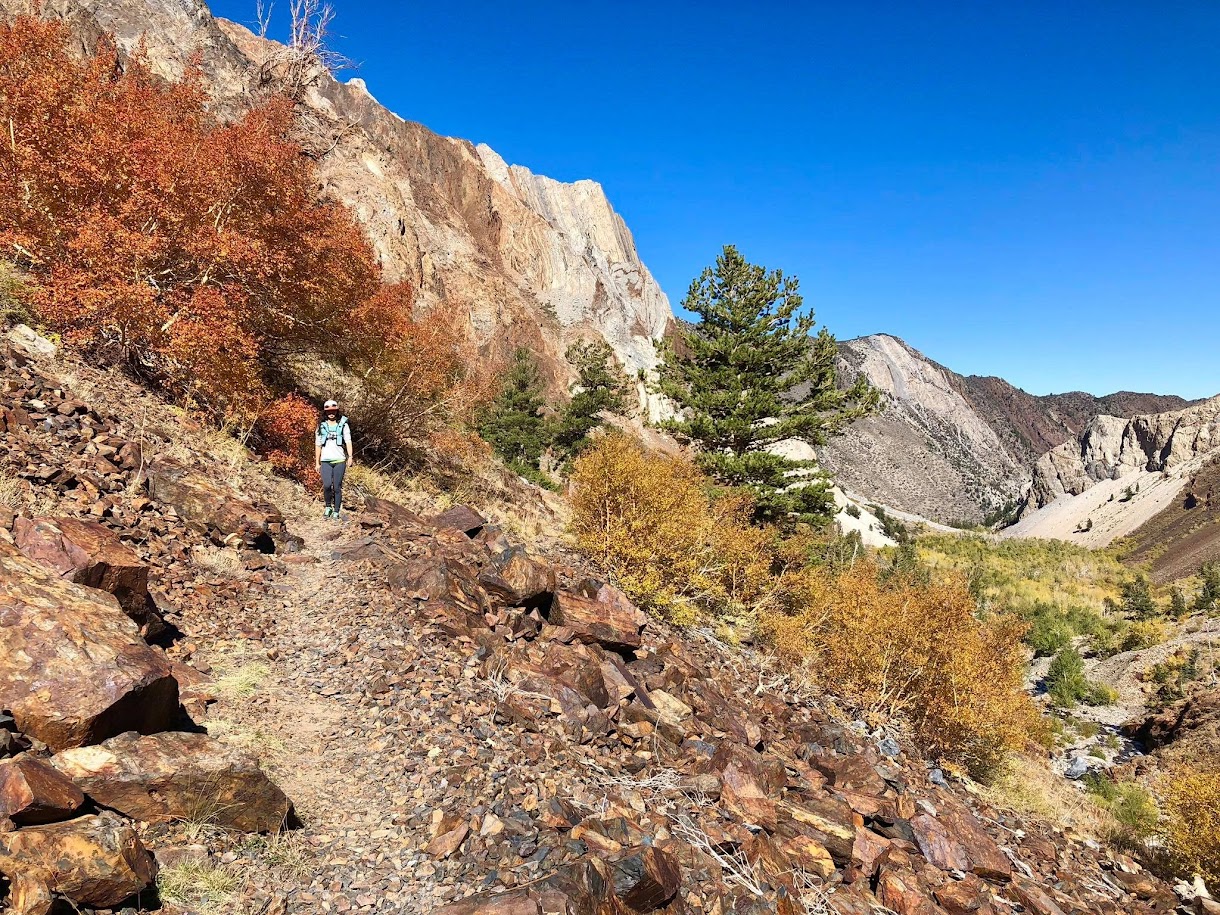 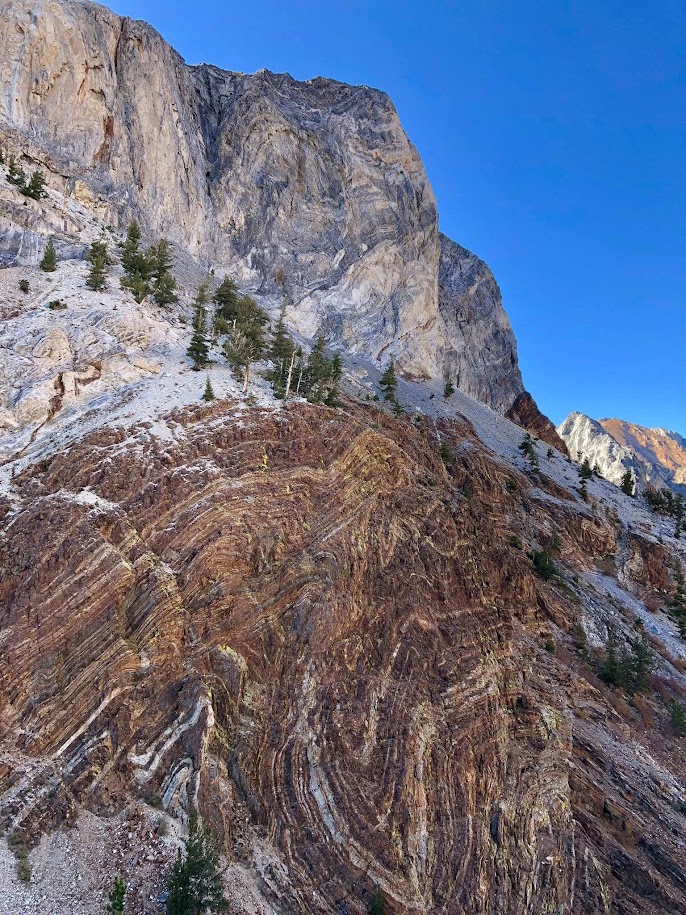 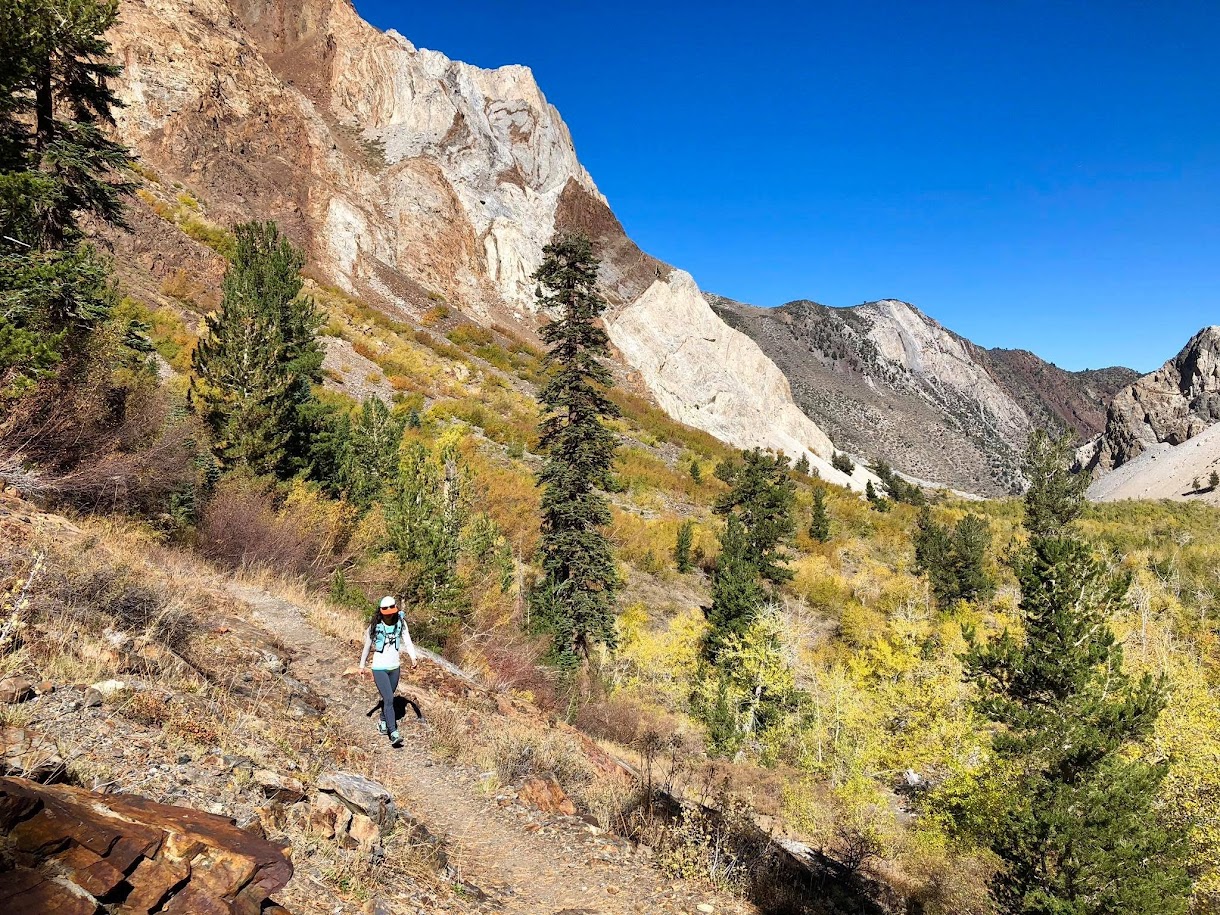 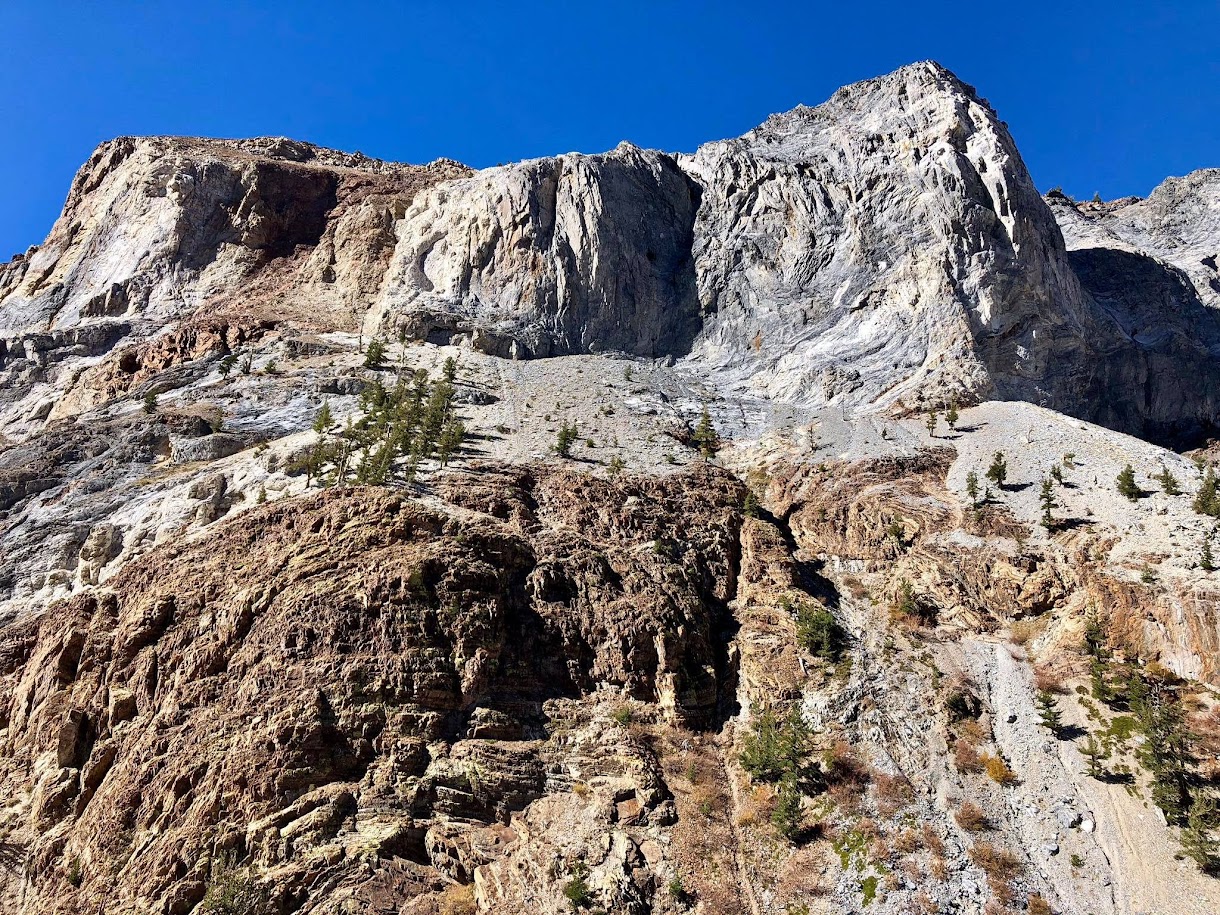 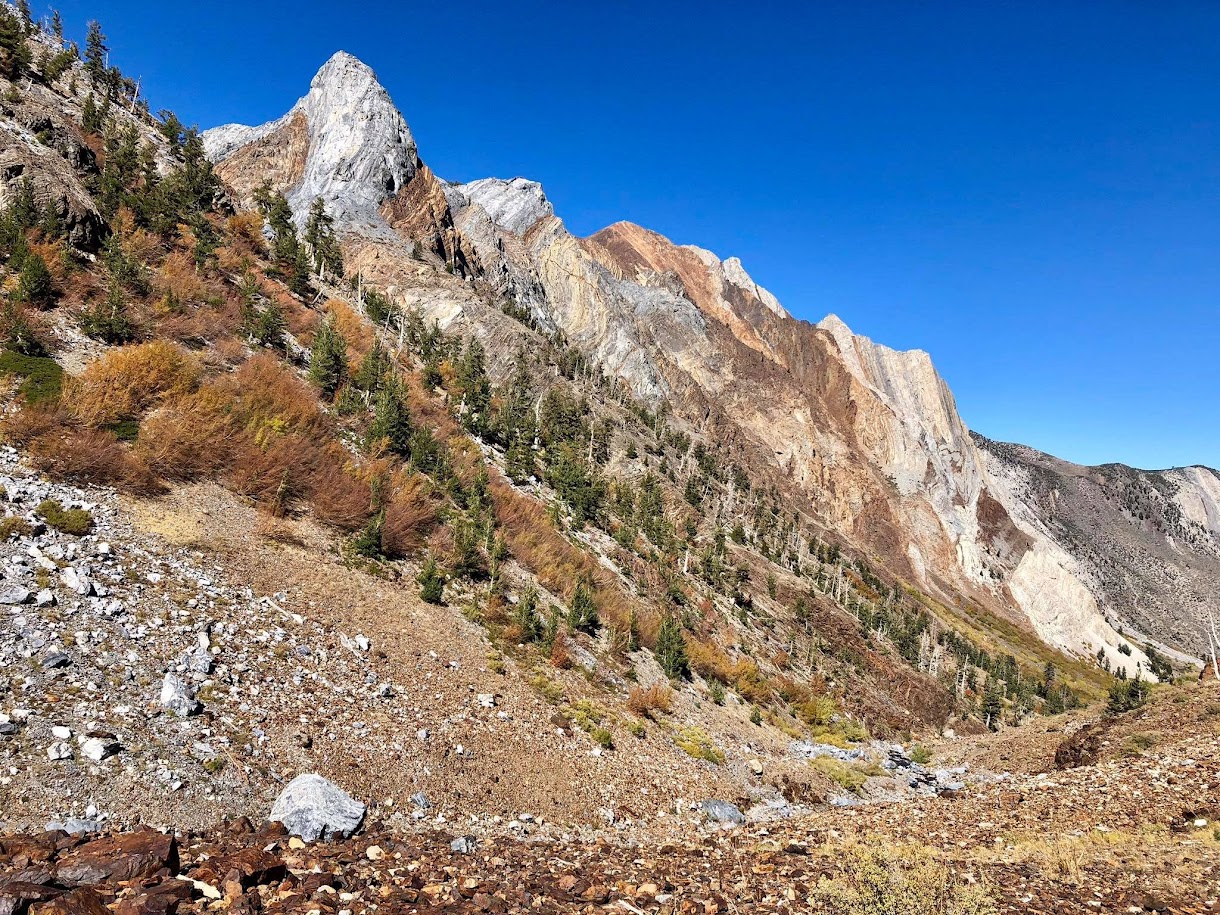 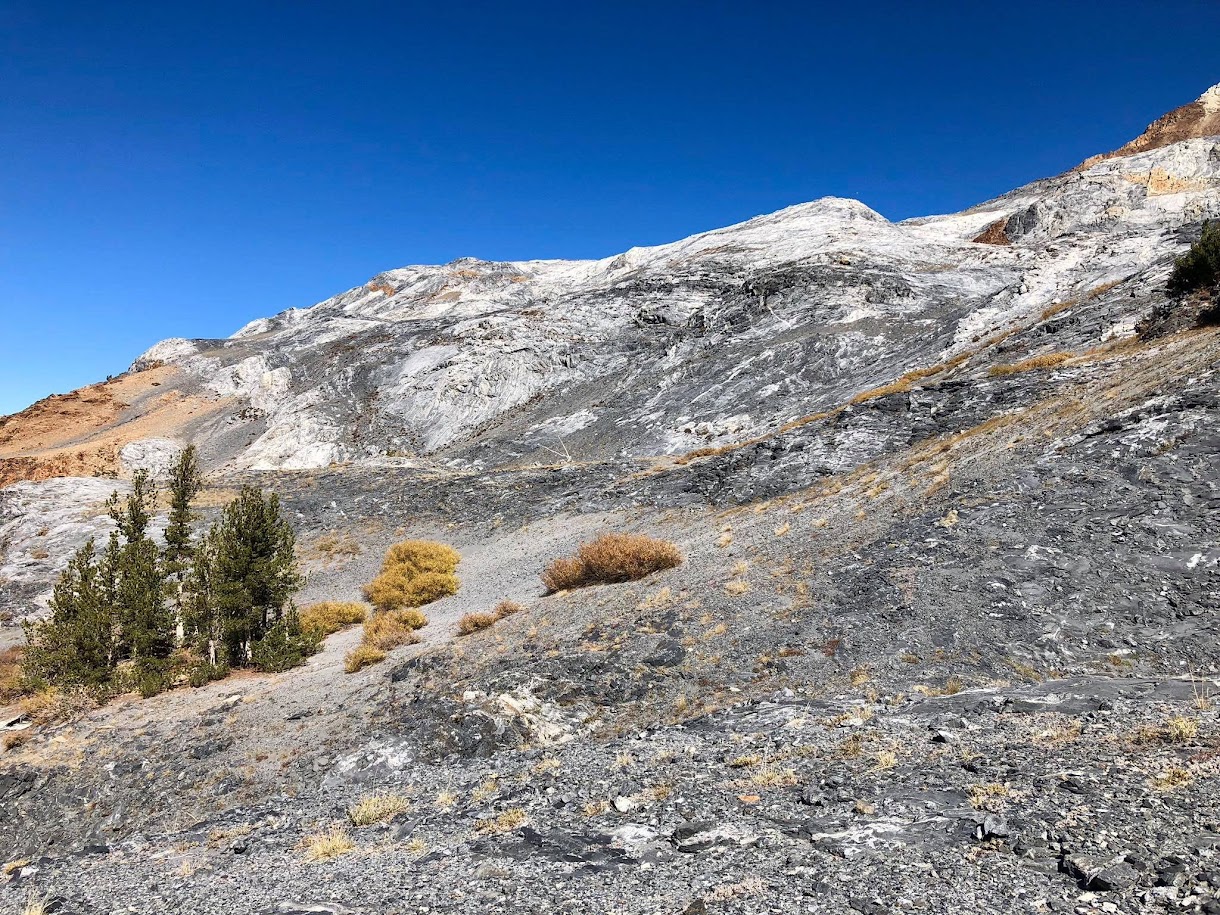 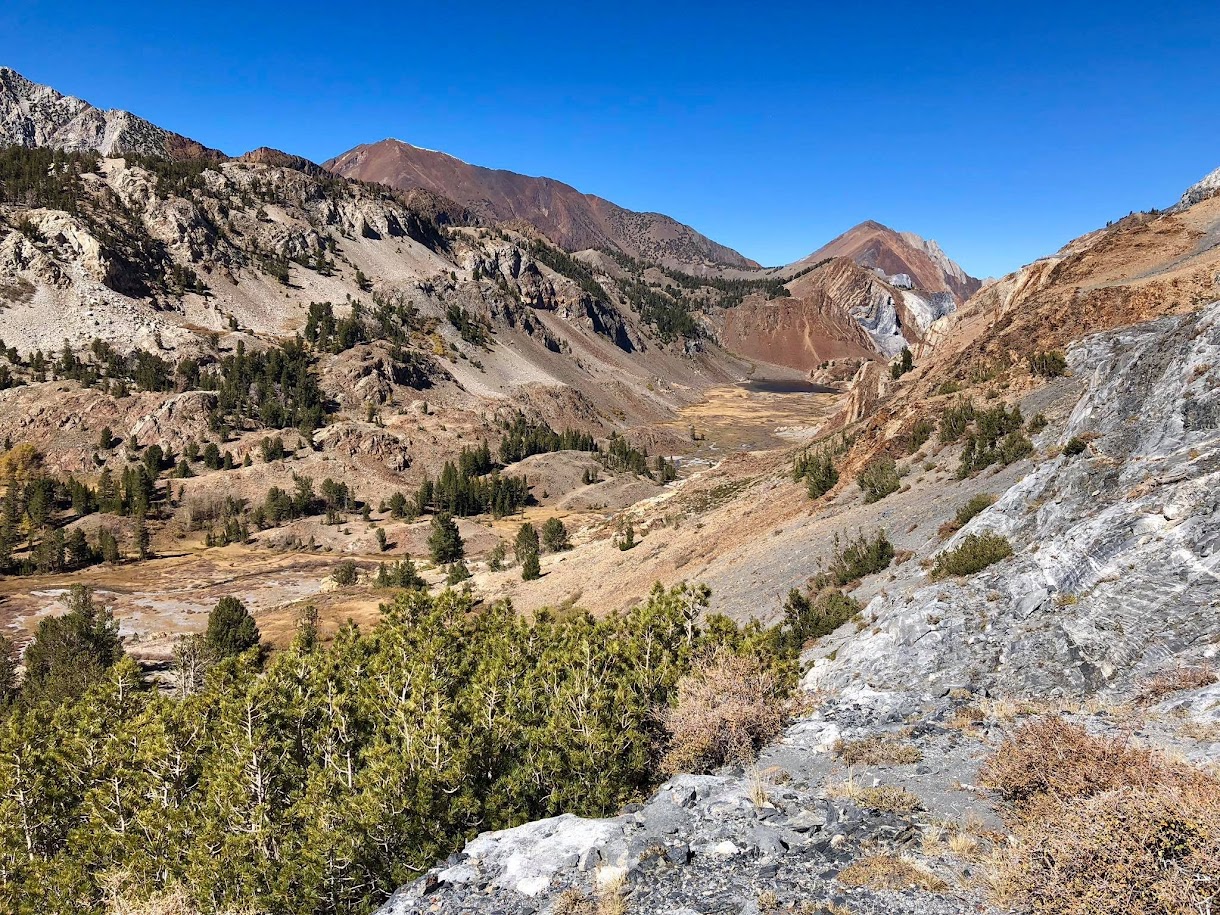 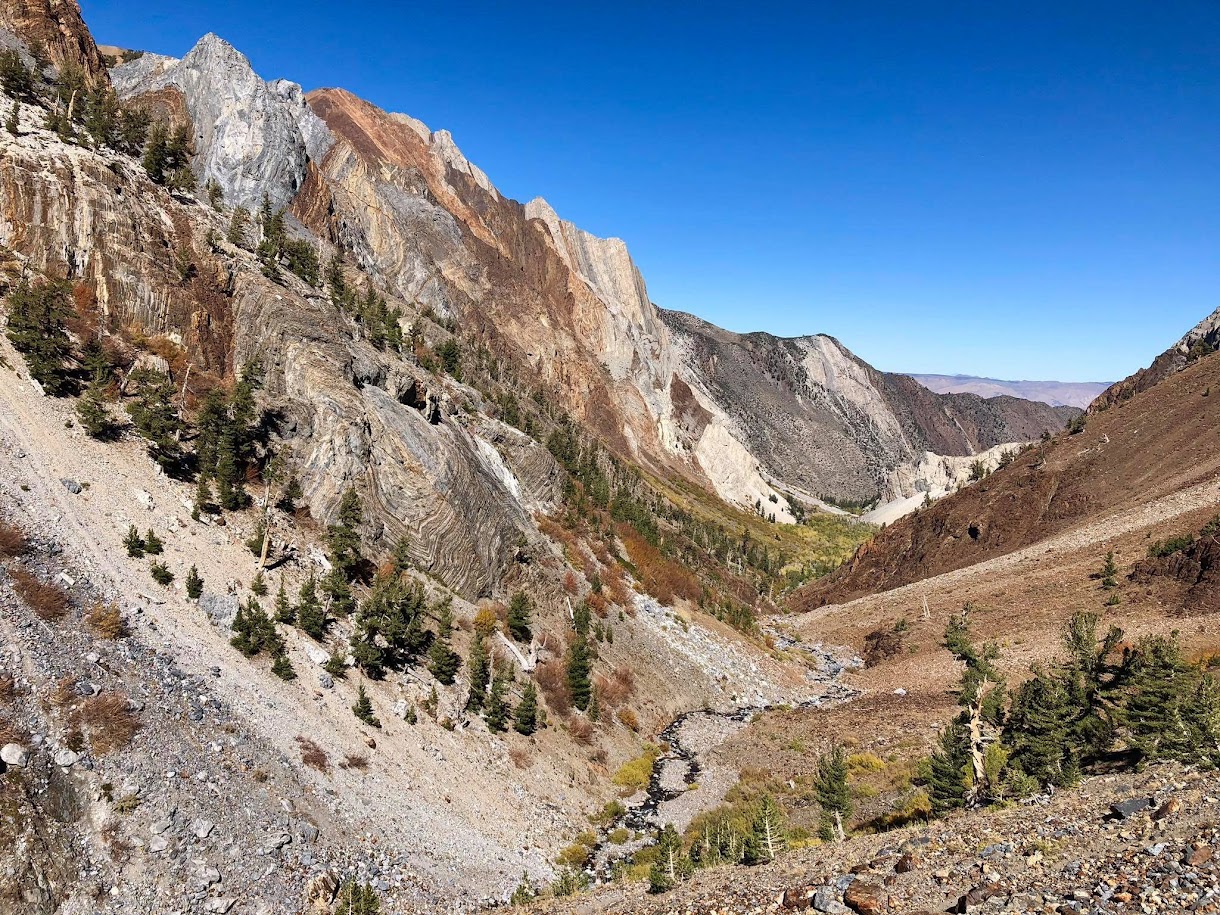 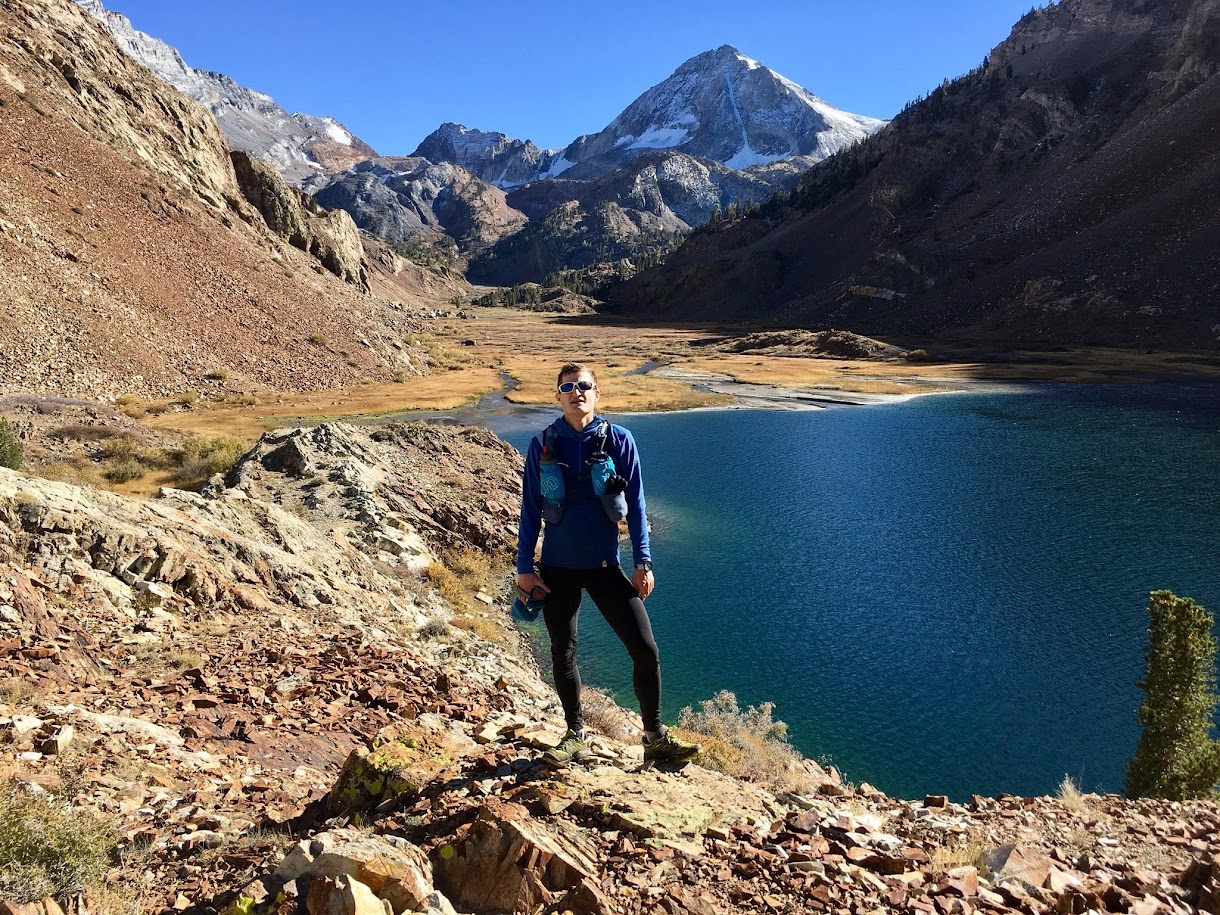 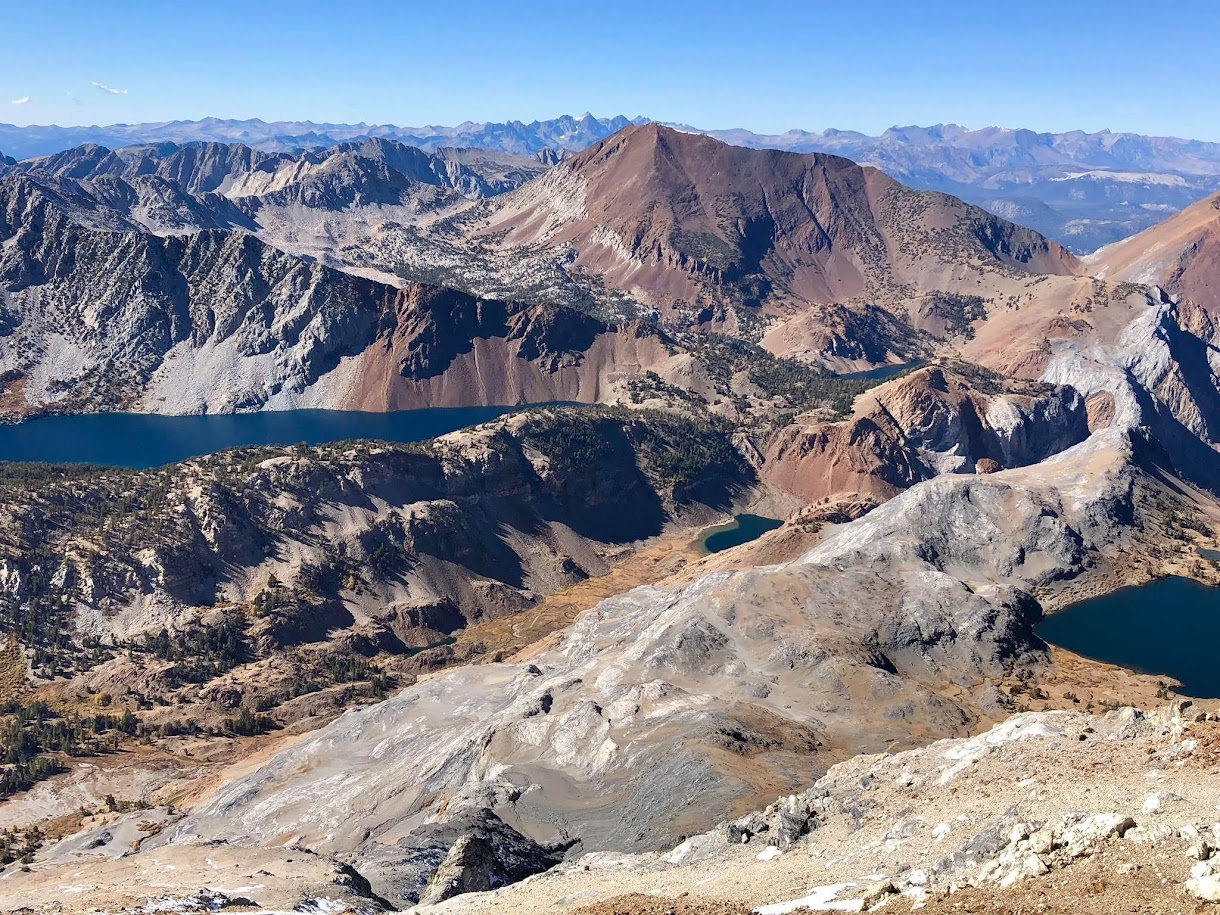