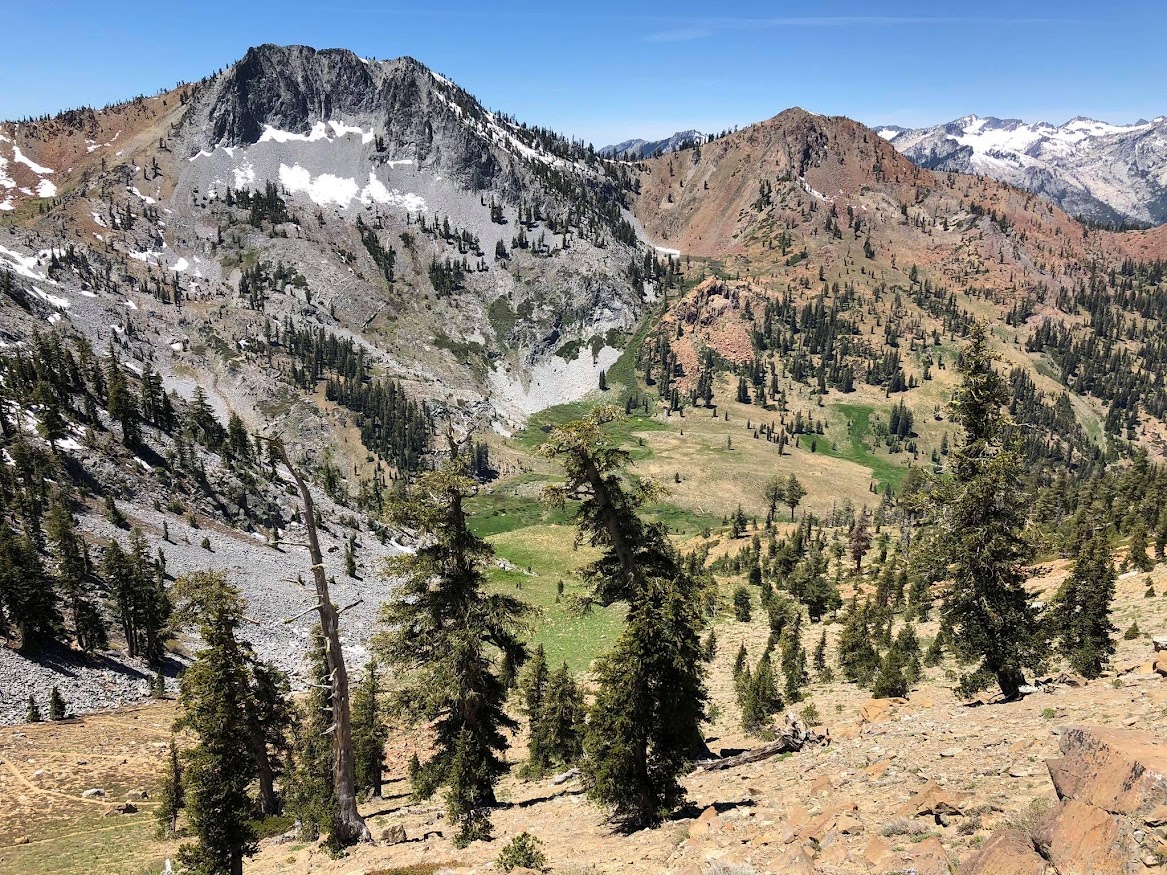 The easternmost part of the Trinity Alps is informally known as the Red Trinities due to the distinctive red rock present in this region. However, within the red rock is a section of white granite that is akin to the White Trinities to the west across the Stuart Fork of the Trinity River. This “island” of white rock stretches from Granite Lake to Gibson Peak to Siligo Peak, and not surprisingly, this area of white rock is also the most rugged part of this region. The transition between the red and white rock is very well defined creating a fantastic juxtaposition. The Four Lakes Loop is located in the heart of the Red Trinities and offers a particularly striking tour of this geologically complex region.The loop is essentially a circumnavigation of Siligo Peak passing by four alpine lakes that surround the mountain. The loop itself is only around 6.5 miles but the entire loop is deep within the Trinity Alps Wilderness and access to the loop is through one of five trails. The shortest and most efficient is the Long Canyon Trail at 6 miles (18+ miles total for the loop and access), but other options include the Stoney Ridge Trail, Granite Lake Trail via Swift Creek, Deer Creek Trail via Stuark Fork Trinity River, and Bear Basin. The land is not as rugged as the neighboring White Trinities, but it has a unique and charming character that is spectacular in its own right. The Four Lakes Loop is a wonderful introduction to the region and has new and spectacular scenery around seemingly every corner.   Some of my favorite photos are on this post, but the full album is here.

In late summer of 2016 I accessed the loop via Long Canyon which is the shortest approach.  However, this year I joined Erica for a longer but arguably more scenic approach via Swift Creek, which passes by lovely Granite Lake and includes wonderful views from Seven Up Pass (and Seven Up Peak for those willing to make the short scramble).  The Swift Creek Trail also passes by a beautiful gorge section of Swift Creek, a lovely old growth forest including many large incense cedars, and the wonderful Gibson Meadows. The final pitch to Seven Up Pass is quite steep but the descent on the other side into the Deer Creek drainage is well graded with long switchbacks and bountiful views. The extra elevation gain necessary for this approach is more than compensated with awesome views from Seven Up Pass and Peak. Views include Mount Shasta, the White Trinities, Siligo Peak, Dolomite Ridge and the northern side of Gibson Peak, the highest summit in the Red Trinities.  In addition, there’s a beautiful grove of Northern Foxtail Pines in the vicinity of the pass and especially up towards Seven Up Peak with ancient trees assuming their classic grizzled characteristics.

At the bottom of the descent from Seven Up Pass is a glacial valley near the headwaters of Deer Creek with expansive meadows. Turn left to briefly join the Deer Creek Trail before reaching another junction with the Four Lakes Loop. For a clockwise tour of the loop, turn left and the trail commences a steep steep ascent up the valley headwall of Deer Creek through meadows and clumps of Mountain Hemlock to Deer Lake. The imposing cliffs of Dolomite Ridge dominate the view and are fantastic along this section. From Deer Lake there’s a bit more climbing before beginning a lovely traverse through red rocks above Deer Lake and up some switchbacks to the south shoulder of Siligo Peak. The trail passes through wonderful meadows stretching down to Deer Lake and includes western pasqueflower. At the shoulder of Siligo Peak a use trail departs up the ridge to 8,162 ft Siligo Peak. In only a quarter mile the trail reaches the summit which contains a gorgeous 360 degree panorama of the region. To the west one has a birds eye view of Diamond Lake, the Stuart Fork of the Trinity River canyon, and the White Trinities. All of the major peaks of the White Trinities are visible including Mount Hilton, Thompson Peak, Caesar Peak and Caribou Mountain. Closest and most prominent is Sawtooth Mountain with its distinctive tooth-like summit block and a massive apron of white granite slabs on its east side. To the south is Summit Lake, Red Mountain and Middle Peak. To the east is a striking demarcation between the red rocks of Seven Up Peak and the rugged ridge known as Dolomite Ridge composed of the white rocks. To the north one peers into the glacier-carved Deer Creek canyon with Mount Shasta’s distinctive snow-capped cone rising above the ridges. Suffice it to say, the side trip to Siligo Peak is well worth the extra effort.

Back on the Four Lakes Loop one may make a side trip to Summit Lake which is the largest of the four lakes on the Four Lakes Loop. Continuing on, the loop drops into the Salt Creek drainage and switchbacks down toward Diamond Lake, which hangs on a meadowy bench with the White Trinities towering across the Stuart Fork Canyon, particularly Sawtooth Mountain. This is lovely country with bountiful summertime wildflowers and outstanding scenery. From Diamond Lake it’s a gradual climb up to the northwest shoulder of Siligo Peak where one crosses into the Deer Creek drainage. From here the trail traverses above astonishingly beautiful Luella Lake which is positioned right at the line between red and white rock with Seven Up Peak and Dolomite Ridge making a dramatic background. Colorful Luella Lake sits at the base of the north face of Siligo Peak which contains mountain hemlocks and rugged cliffs. This steep north-facing topography enables snow to collect around Luella Lake and persist into late summer and sometimes year around. Beneath Luella Lake the trail descends into a valley in the upper reaches of Deer Creek Canyon. At the valley floor is the junction with the trail that goes down Deer Creek Canyon and the loop is complete. Full album is here.