Matthes Peak lies along Glacier Divide which separates the Piute Creek watershed from the Evolution Creek drainage, and at its western terminus, Piute Creek from the South Fork San Joaquin River. The long ridge also serves as the border between Kings Canyon National Park and the John Muir Wilderness. The mountainous terrain surrounding Matthes Peak encompasses some of the most spectacular scenery in the High Sierra and that scenery is pretty much all visible from this lofty perch. You won’t find Matthes Peak on a map as it’s an unofficially named peak, but as the second highest summit along Glacier Divide (just shy of 13,000 feet; 12,980 ft to be exact) with quite a bit of prominence and a stellar view, it’s certainly worthy of a name. From the south Matthes Peak and much of Glacier Divide looks mostly benign as large mounds of talus, but from the north Glacier Divide has an exceptionally rugged character as glaciers carved up the terrain resulting in towering cliffs and beautiful lakes nestled in deep polished granite basins. A collection of pocket remnants of once proud glaciers remain today and are known as the Matthes Glaciers, hence the adoption of the name Matthes to this summit. Unfortunately, the Matthes Glaciers appear largely stagnant and during the drought melted all the way back to the shadiest locales immediately below the north facing cliff faces. In the current regime of our warming climate, it won’t be long (i.e. the next drought) before these glaciers disappear entirely 😦  The Matthes Glaciers and the Matthes Crest in Yosemite National Park received their names in honor of Francois Emile Matthes, a USGS geologist for 51 years who made extensive studies in the Sierra Nevada. Mr. Matthes now has an additional unofficial name in his honor too!  Full photo album here (note photos are from mid July on a snowy year). 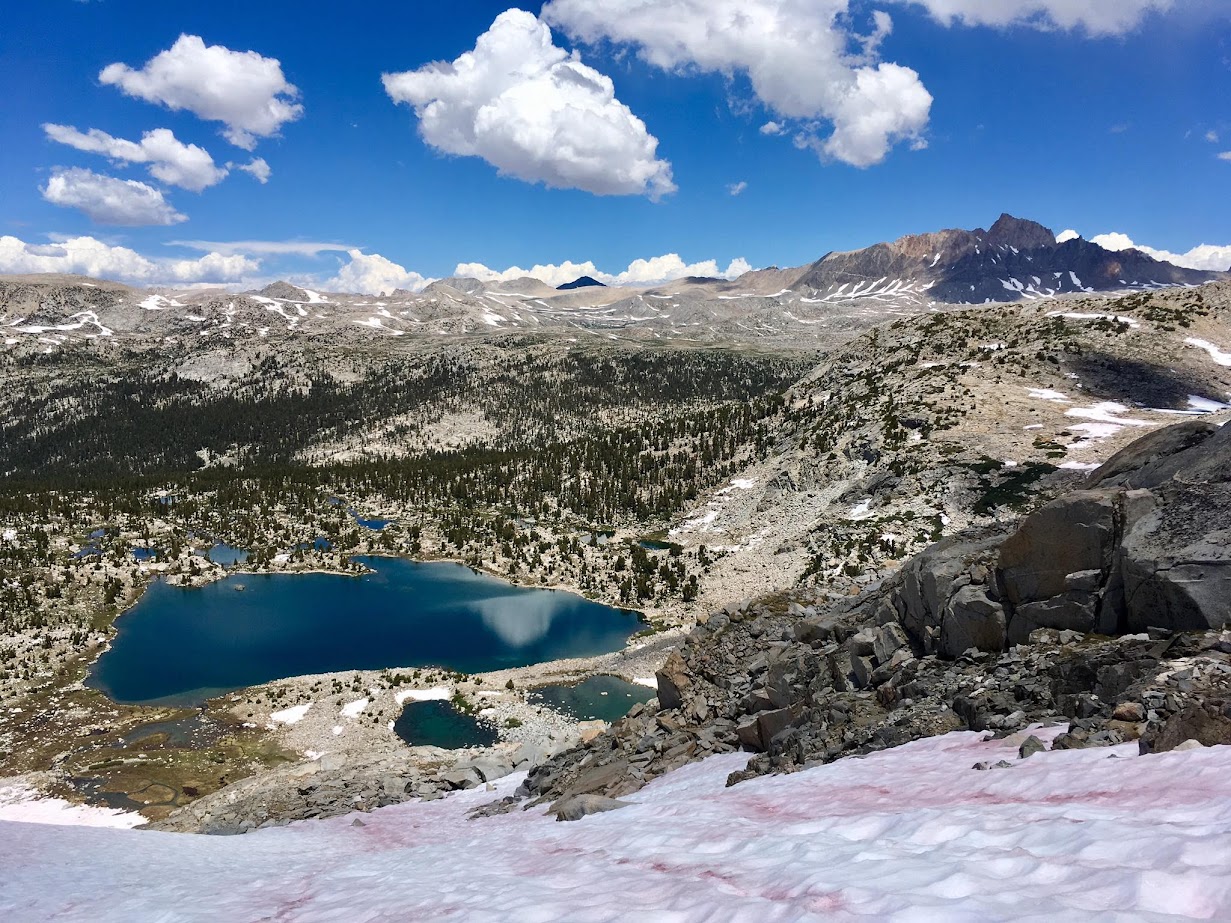 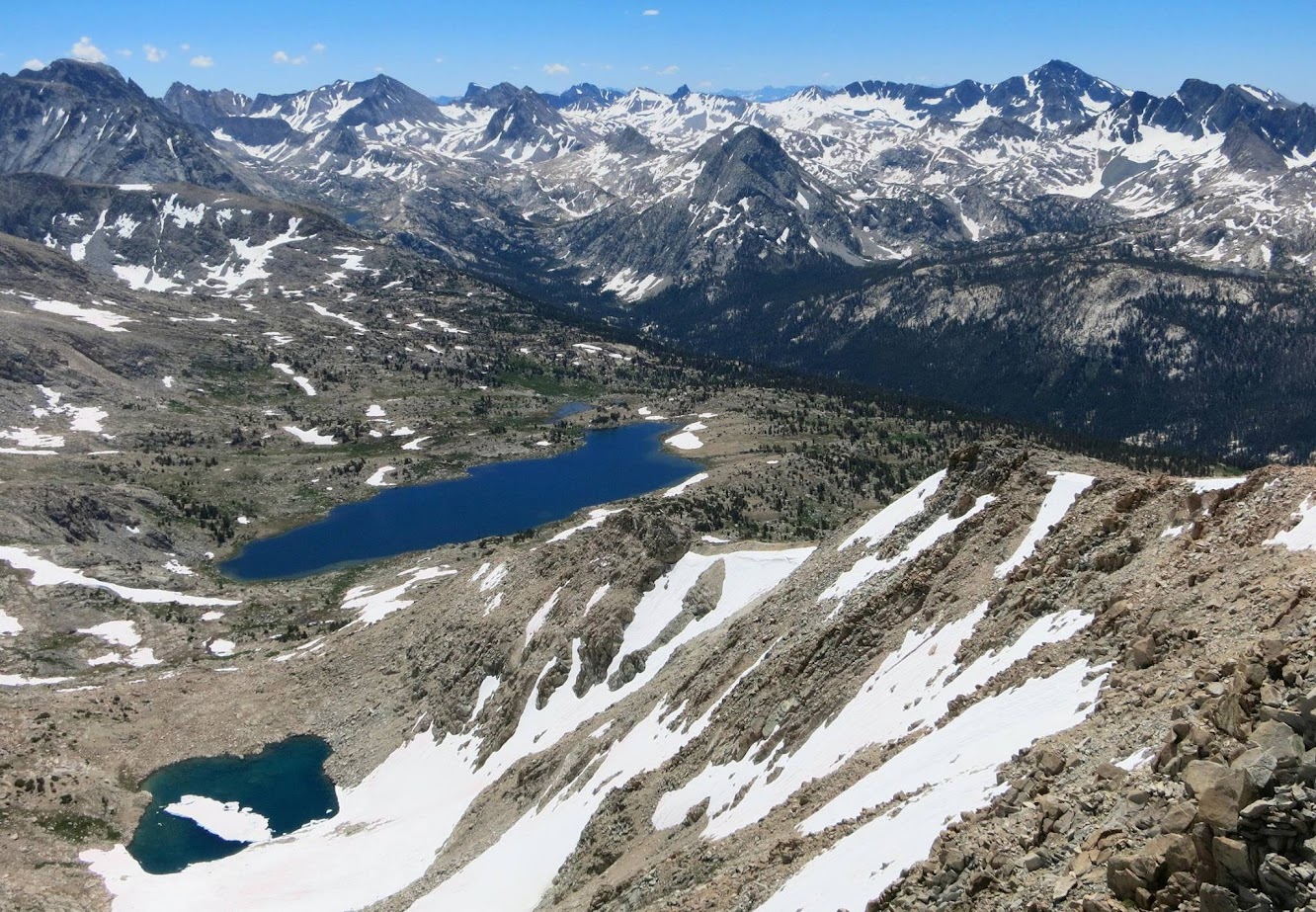 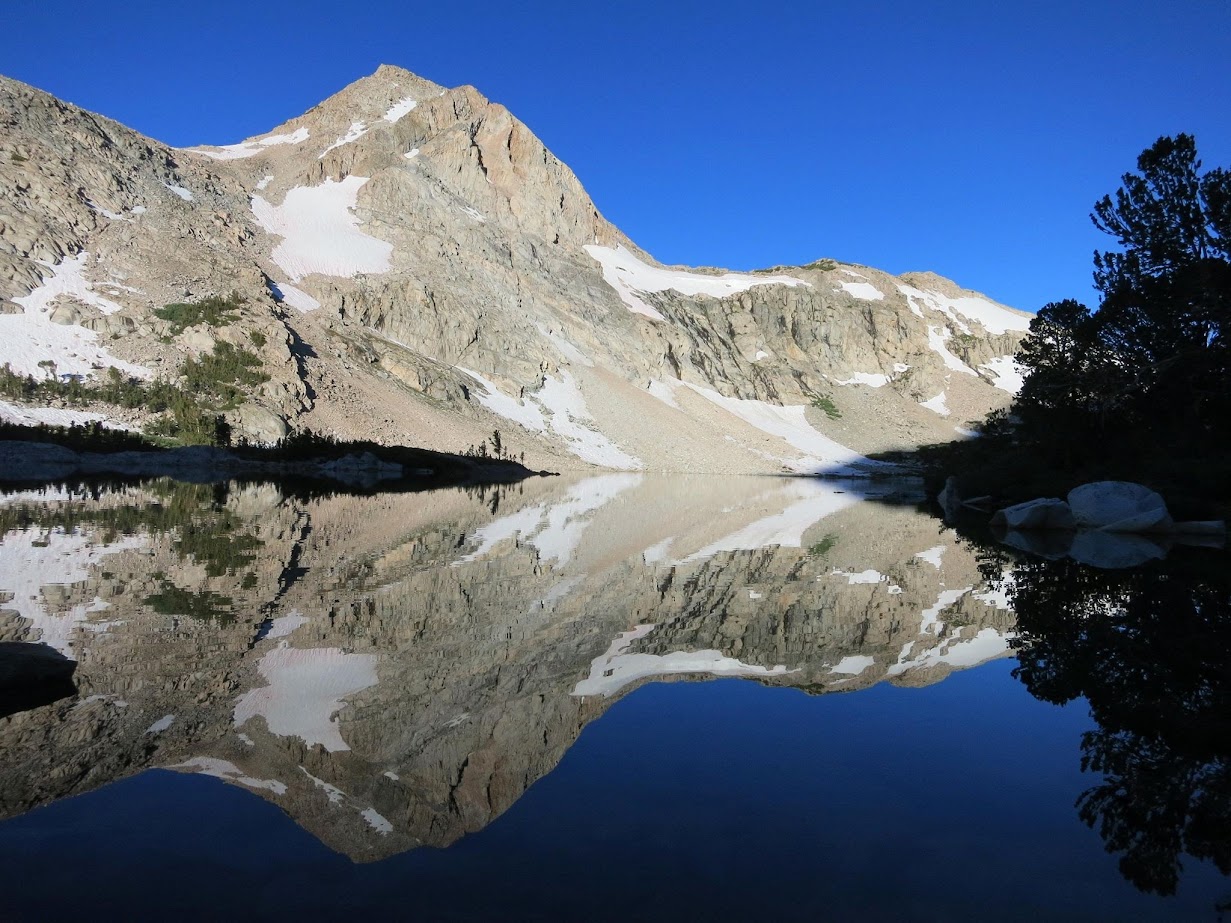 Matthes Peak can be climbed from the southwest via a class 2 talus hop, but the more scenic routes climb from lovely Packsaddle Lake on the north side of Glacier Ridge. In order to access Packsaddle Lake, the easiest access is via North Lake and Piute Pass, which features lovely scenery along the entire route.  From Piute Pass, continue along the trail past Summit Lake. At an unsigned junction, one may either take a usepath left toward Golden Trout Lake or stay on the main trail as it passes through the lower part of Desolation Basin and then descends into the Whitebark pine forest. Either route works, but note that in early season Piute Creek is functionally more like a river so care must be taken to find a safe crossing. In very high snowmelt flows, I found an easy crossing near the outlet of Golden Trout Lake where the stream braids resulting in low depth. In addition, taking the usepath provides an upclose view of the Golden Trout Lakes which are pretty.  By either route, once across Piute Creek it’s a pleasant off trail walk through the pines and then meadows to the shores of Packsaddle Lake. Nestled beneath the cliffs of Glacier Divide with the Matthes Glaciers gleaming, it’s a wonderful spot! 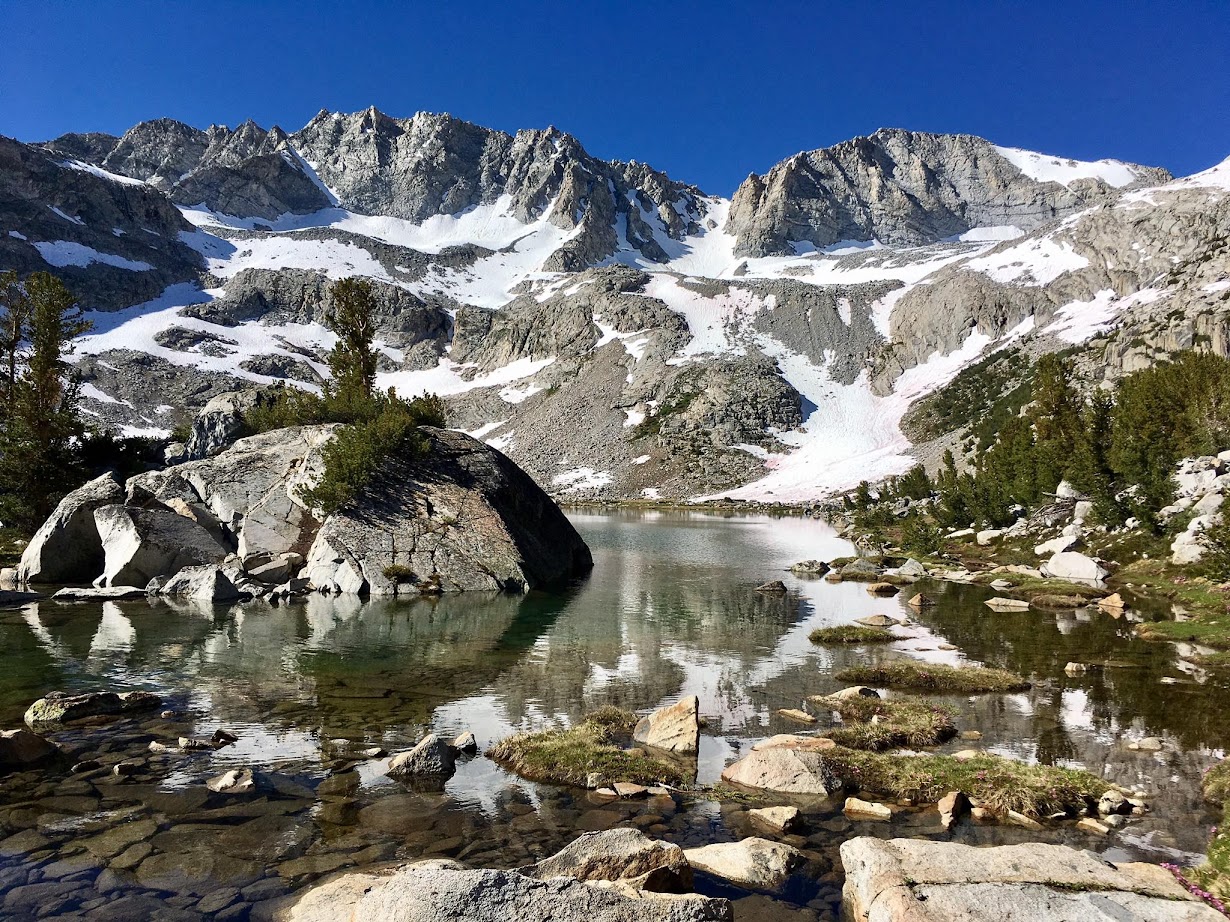 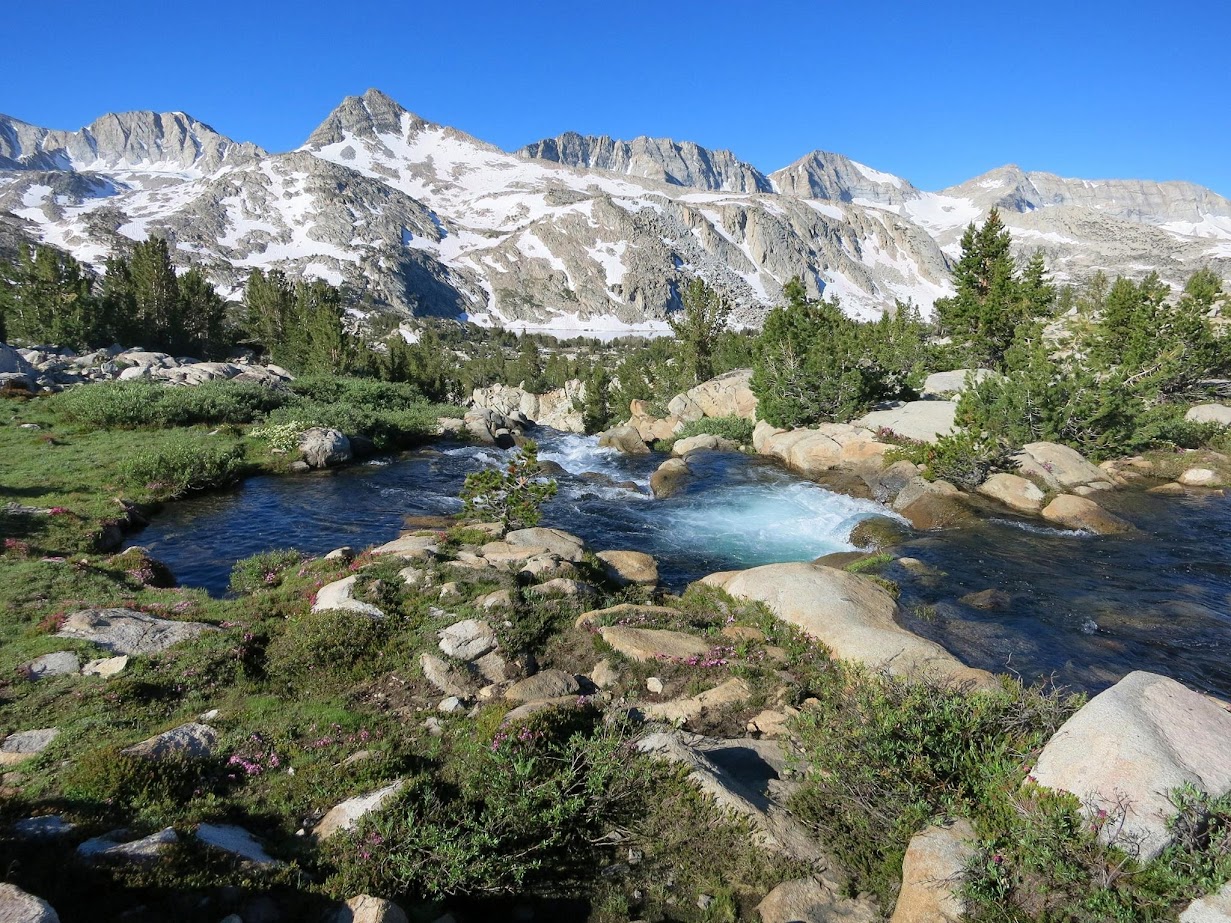 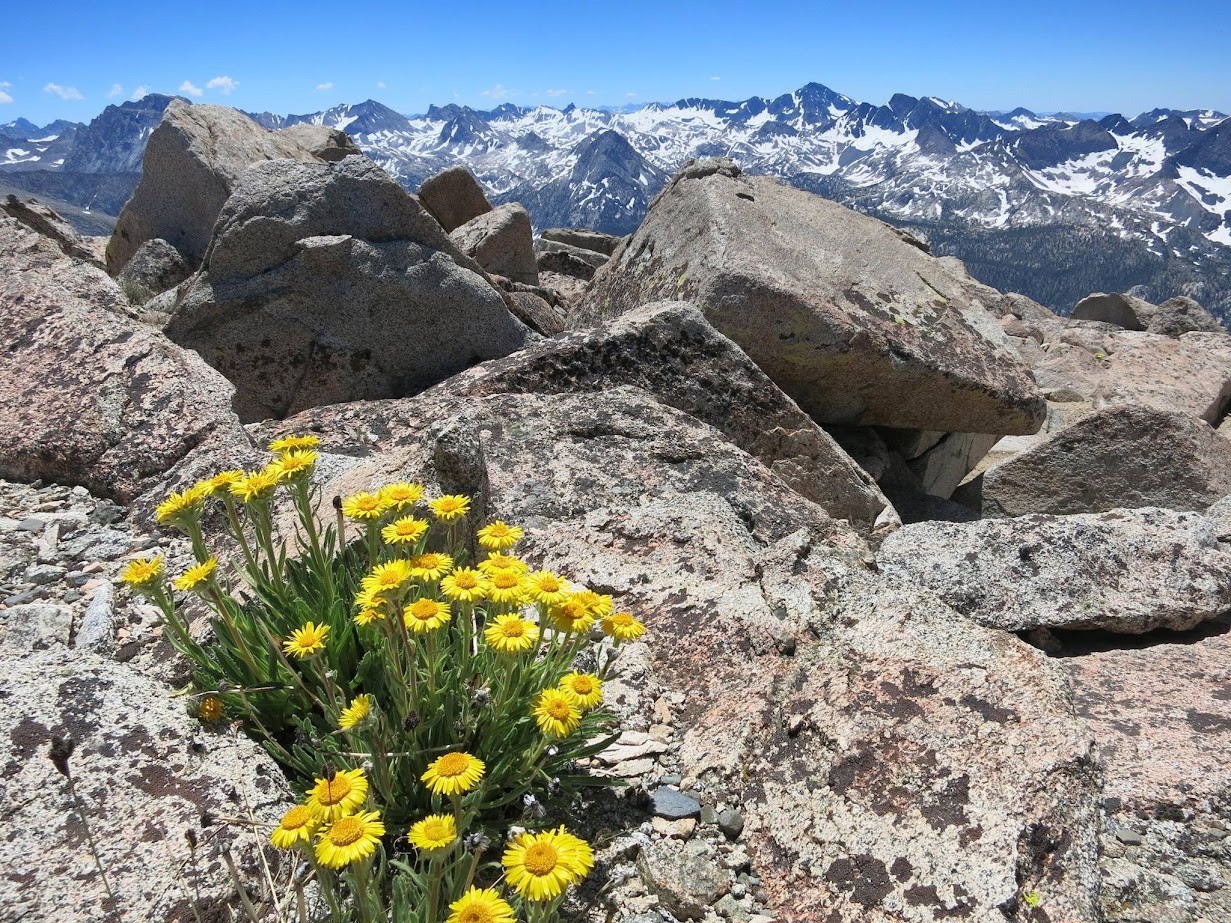 Packsaddle Lake is most easily rounded on its west side. From the south end of the lake continue up loose talus and scree (or snow in early season) or scramble up slabs to climbers left. The system of ledges and slabs can be preferable to the loose mess after the snow melts. After ascending the slabs or talus the easiest route traverses across the glacial moraines toward a small bowl which holds snow late into summer. An alternative steeper route, only recommend when adequately snow-covered, ascends an obvious chute directly above and deposits one along the Glacier Divide crest to the east of the Matthes Peak summit. If taking the easier route, after traversing the glacial moraine west a broad saddle comes into view, known as Packsaddle Pass. Most of the way to the pass is either straightforward snow or glacial boulders, but the final couple hundred feet up to the pass is quite steep and likely requires ice axe and crampons whenever it’s snow covered. From Packsaddle Pass, turn east and climb talus for several hundred vertical feet to the summit, which is situated on a plateau with gravel interspersed with rocks. This plateau contains lovely alpine flowers in season with Alpine Gold and Sky Pilot particularly prominent. The east end of the plateau contains the feature view above lake Frances Lake with Evolution Valley and the many peaks of the Evolution Basin area in the background. To the west is the Le Conte Divide and to the east is Mount Humphreys towering above Desolation Basin. Immediately below the summit is Packsaddle Lake and to the north are views to Lobe Lakes and Bear Creek Spire group of peaks. It’s an excellent view and worth spending some time on a local flat rock to admire the surroundings!  Numerous options exist from the summit besides simply retracing steps, including descending toward Frances Lake and out via Darwin Bench and Lamarck Col and further explorations into Evolution Basin. Full photo album here. 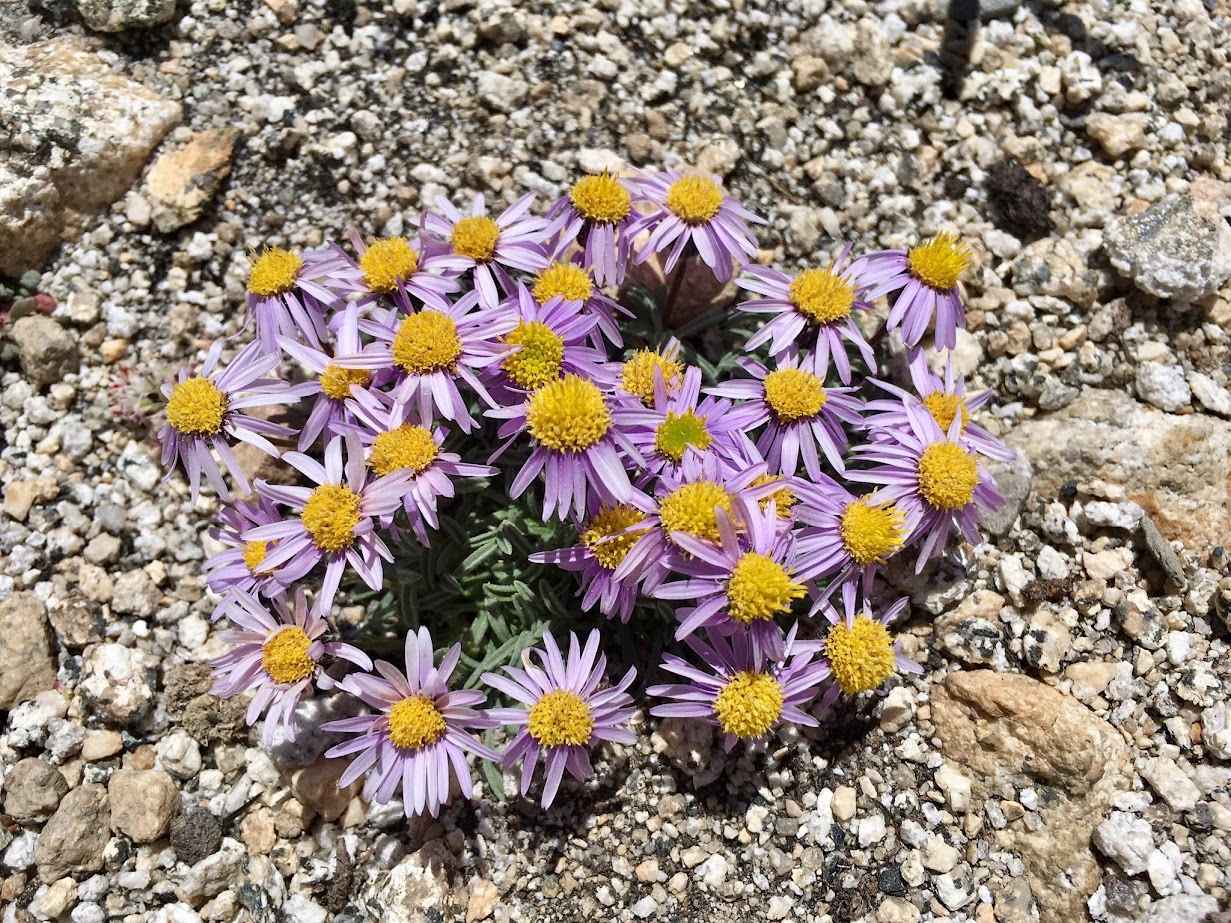 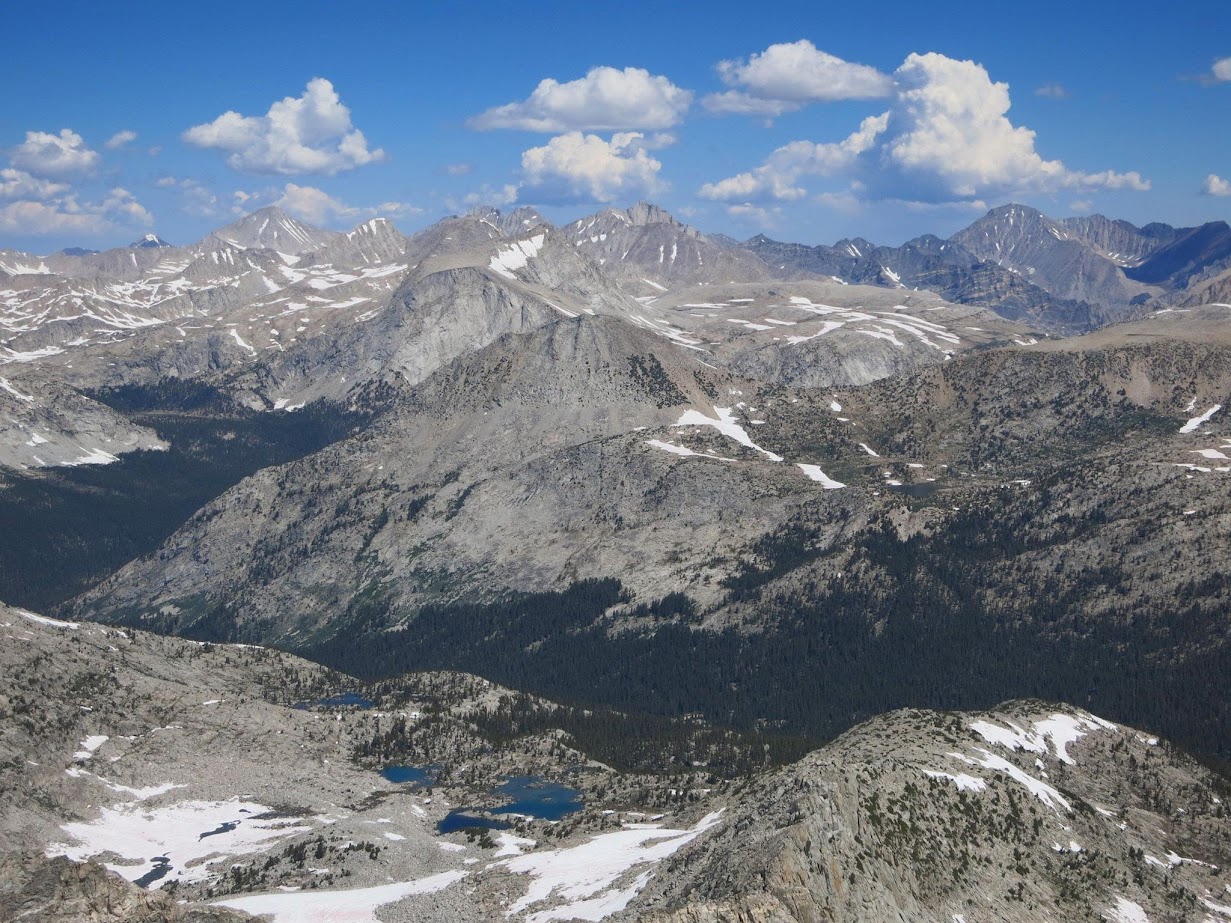 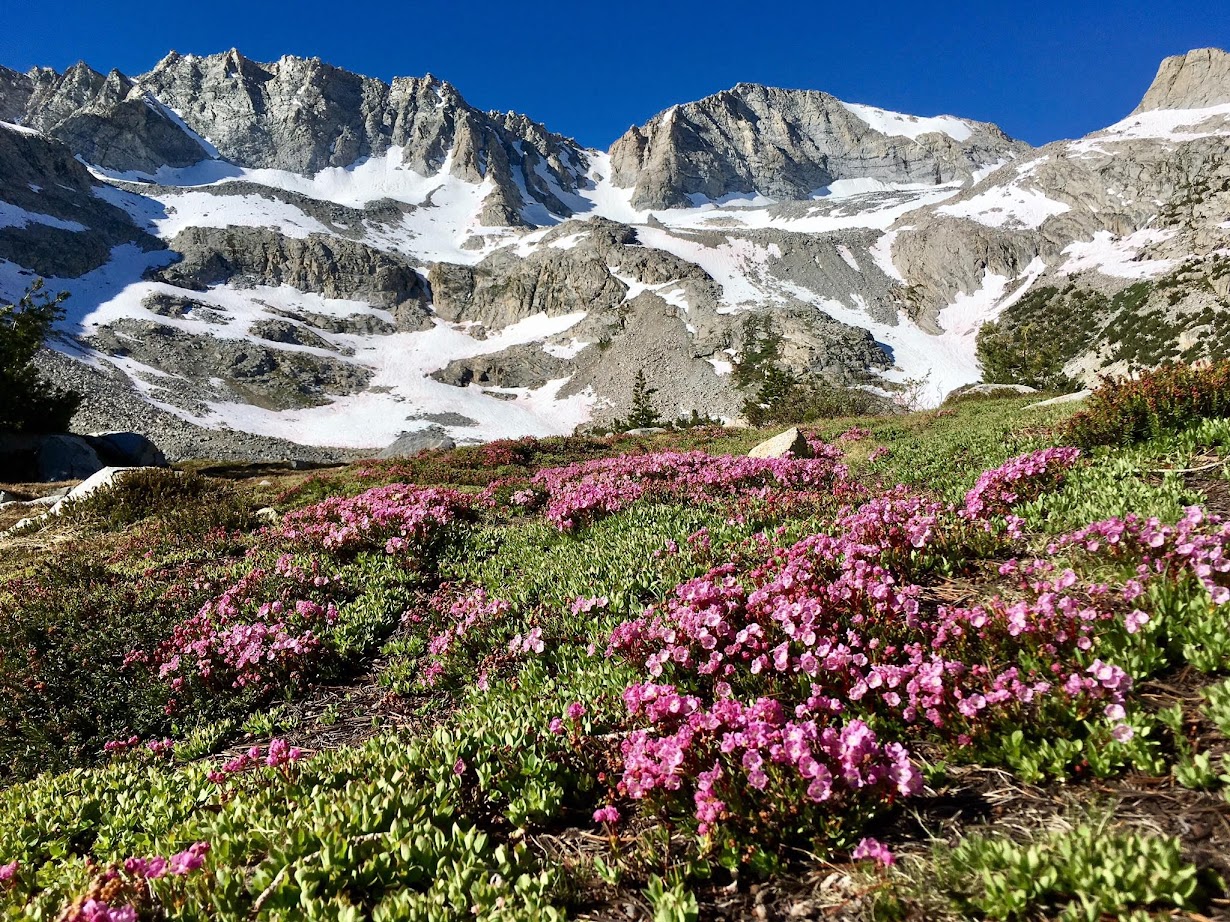 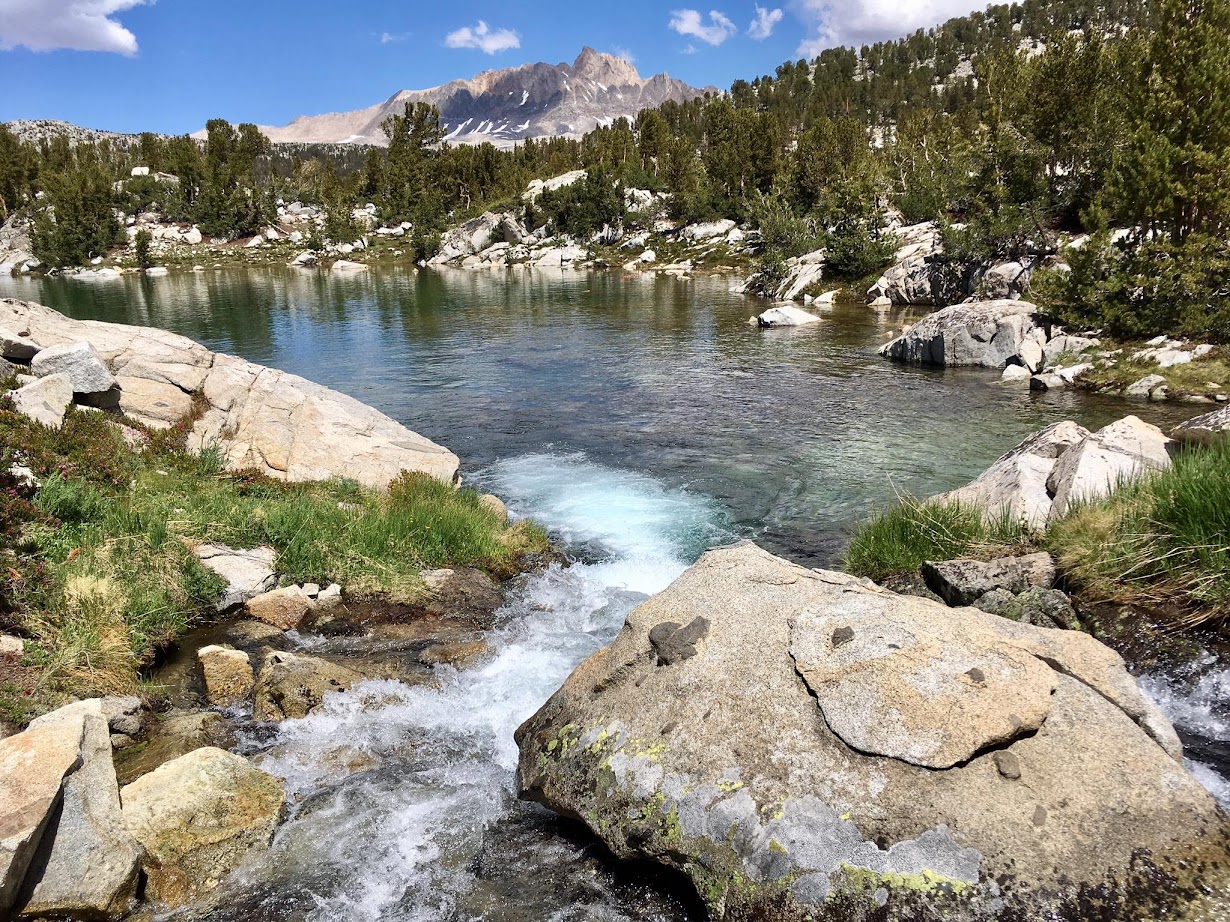 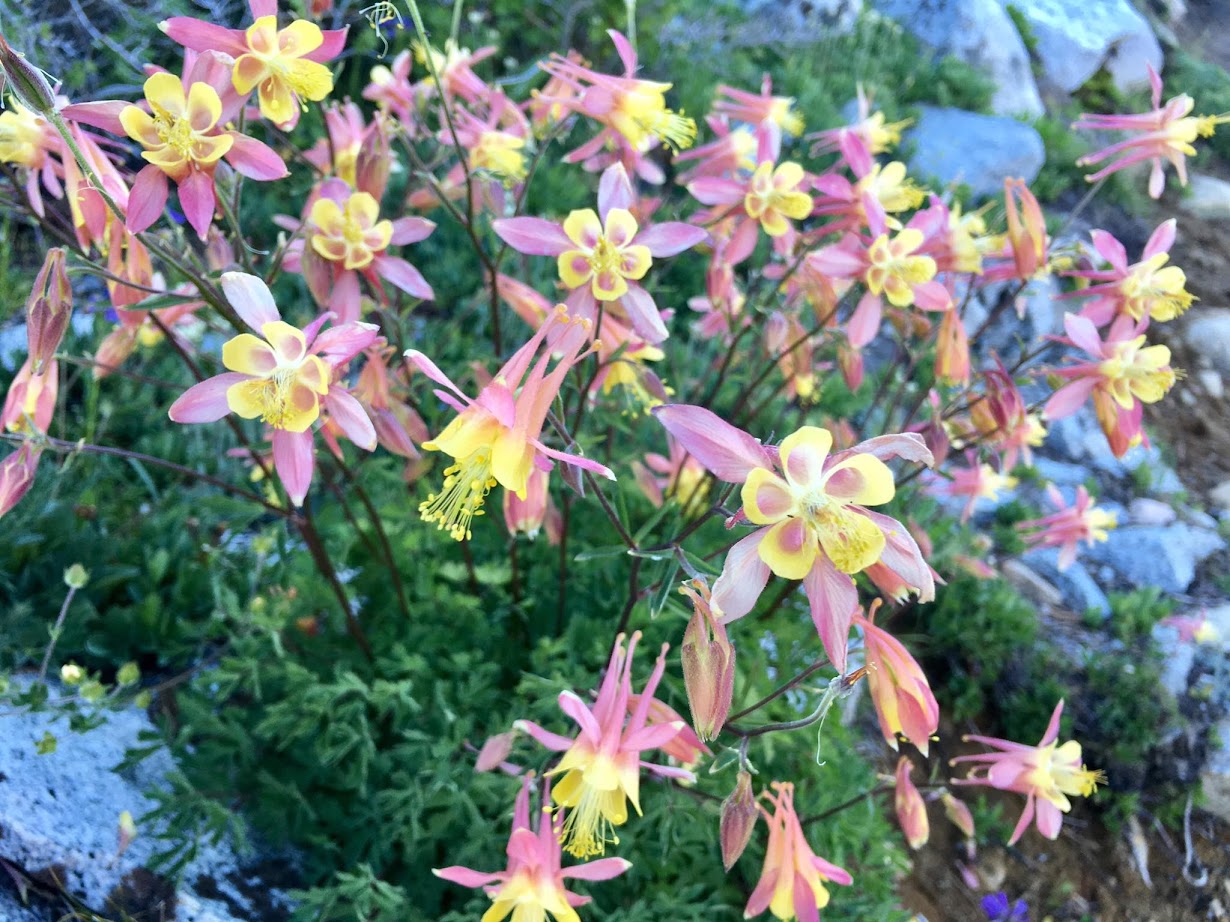 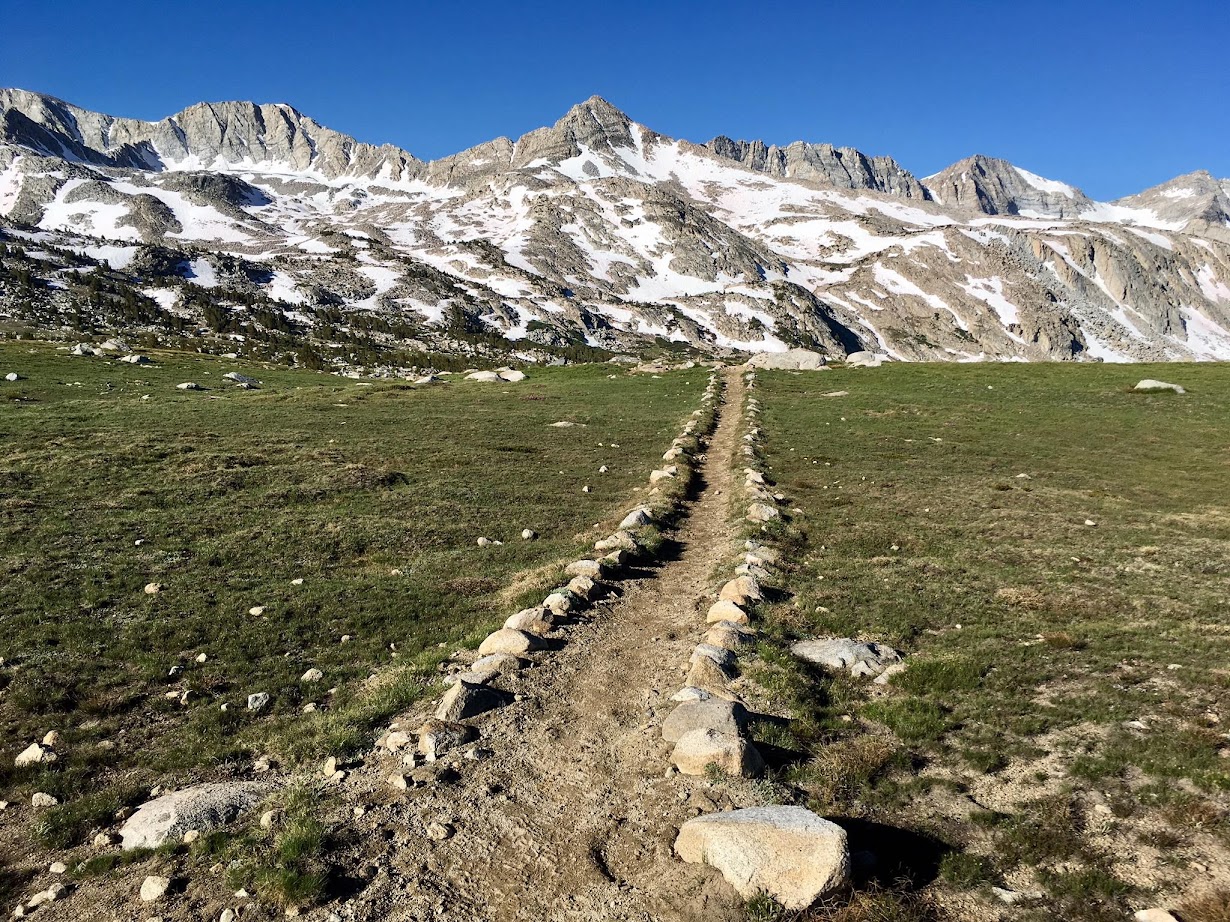 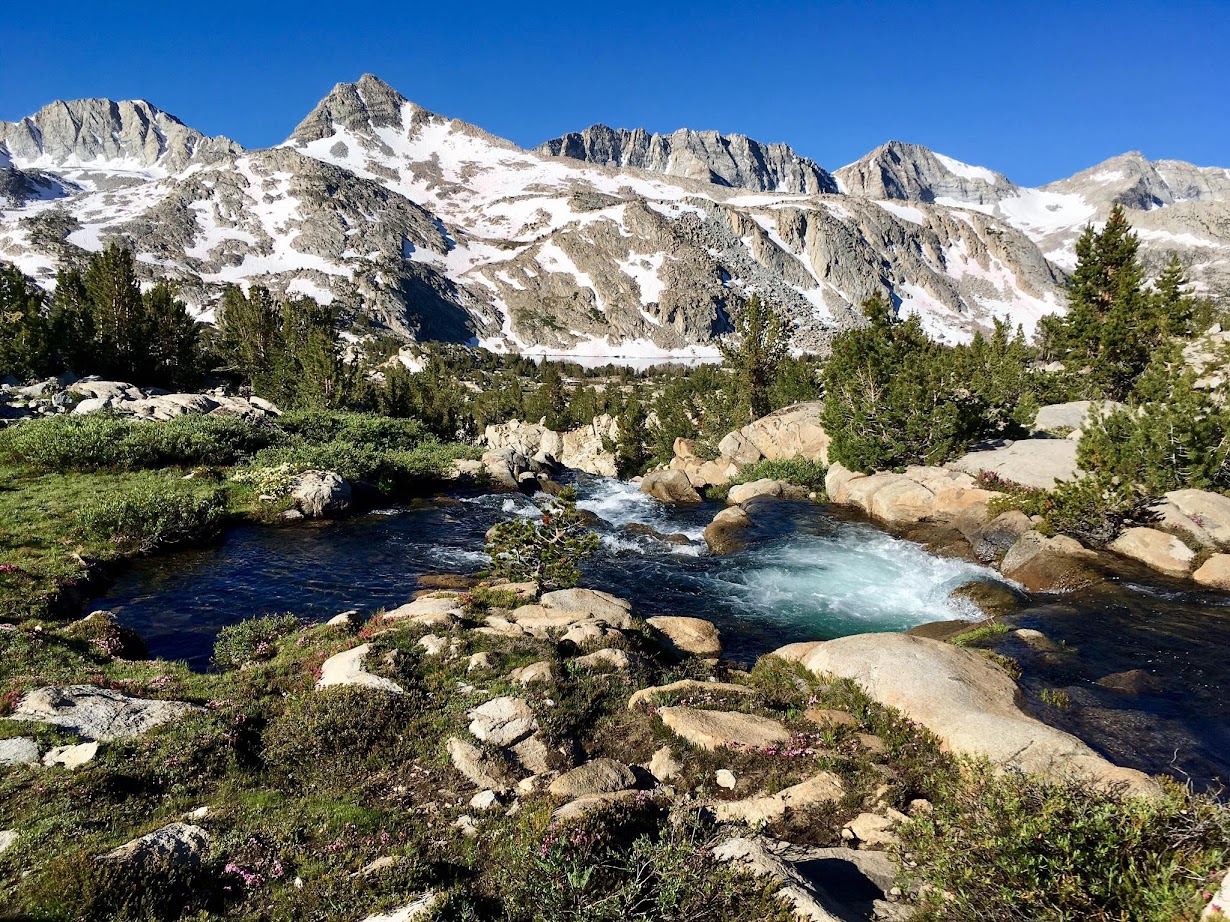 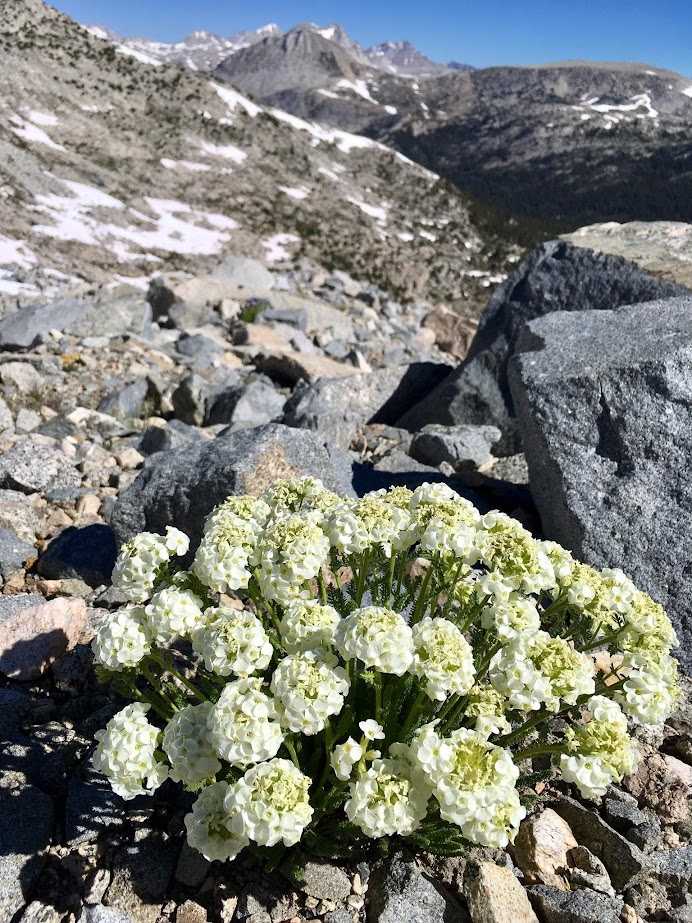 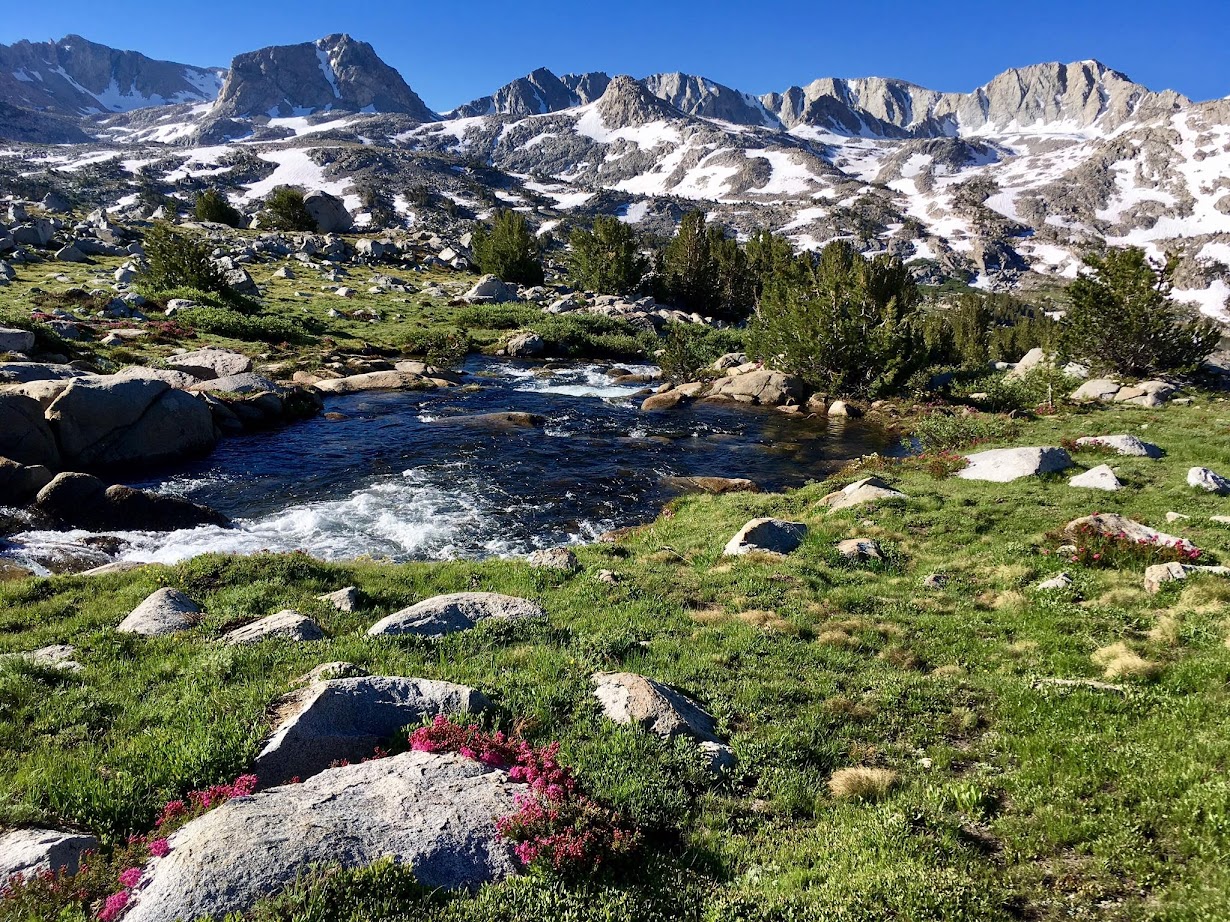 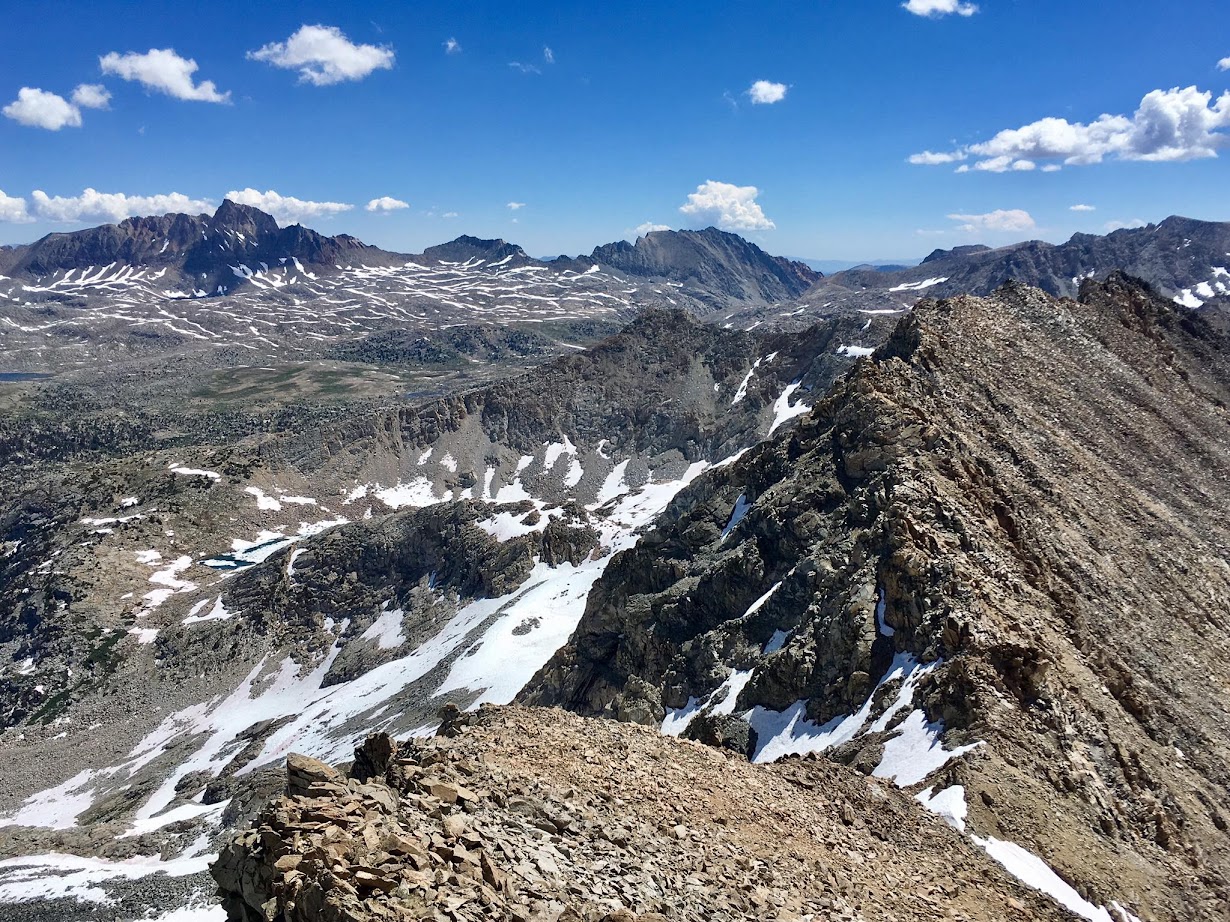 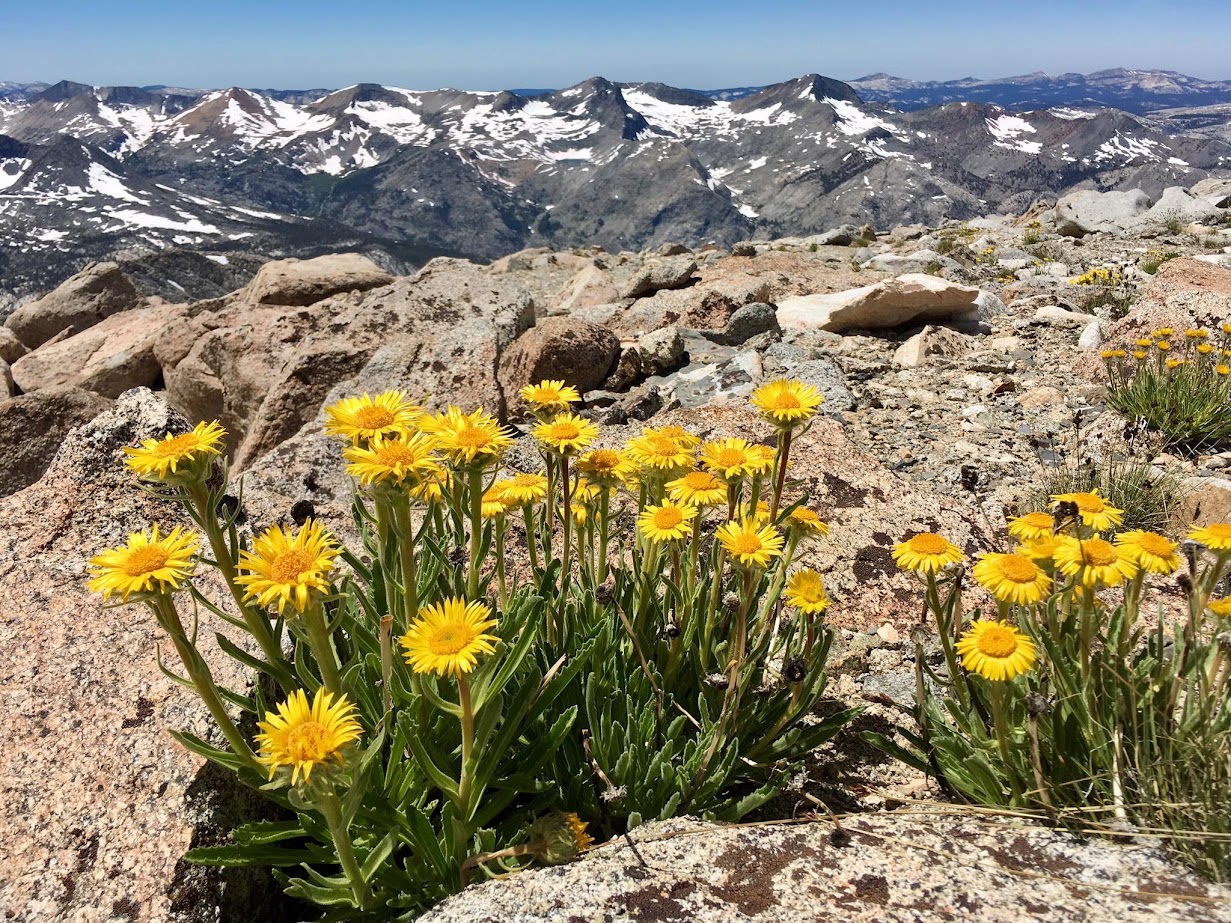 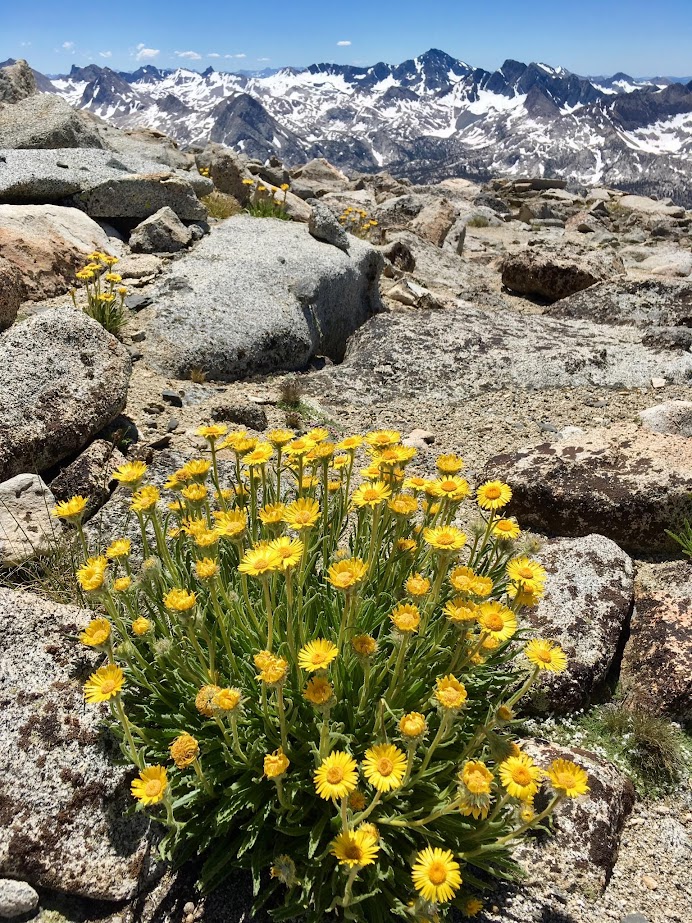 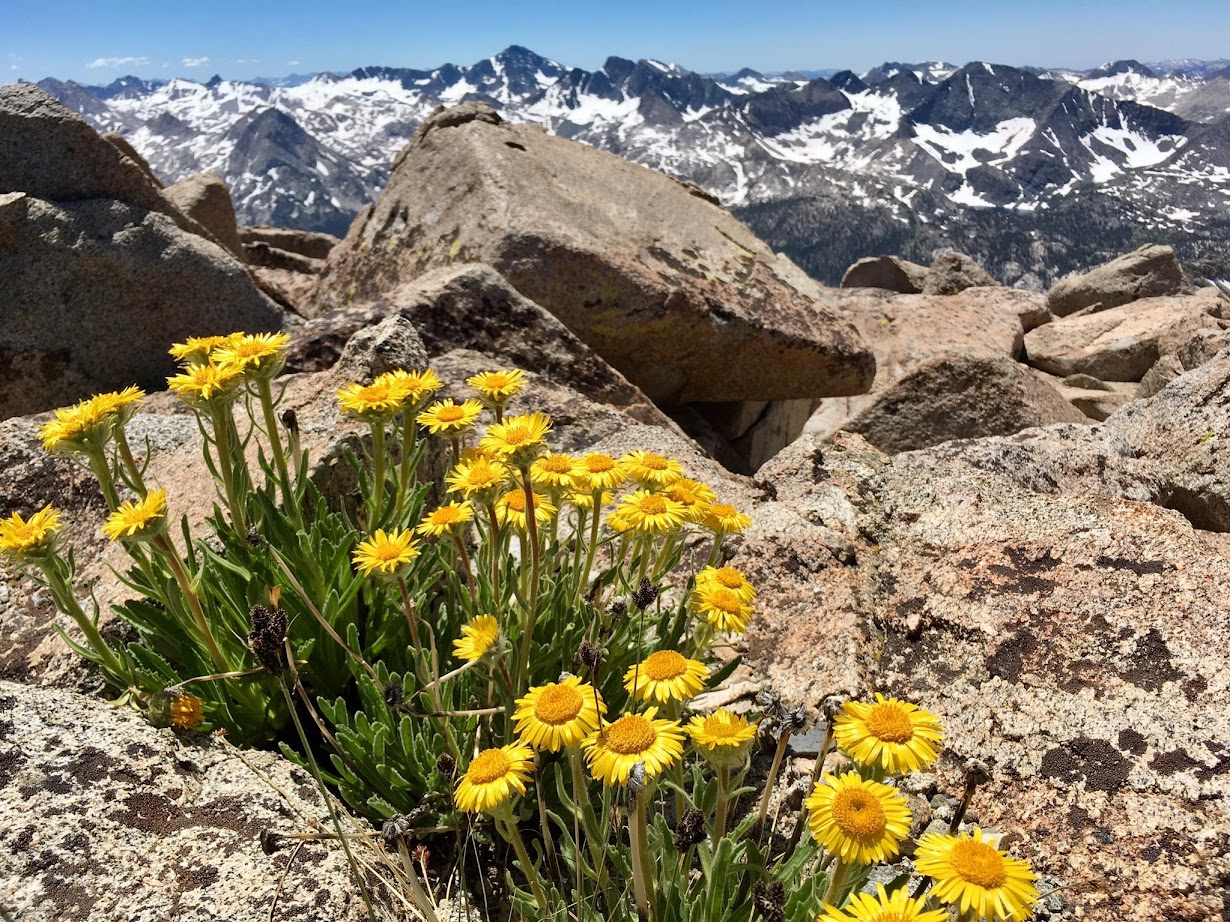 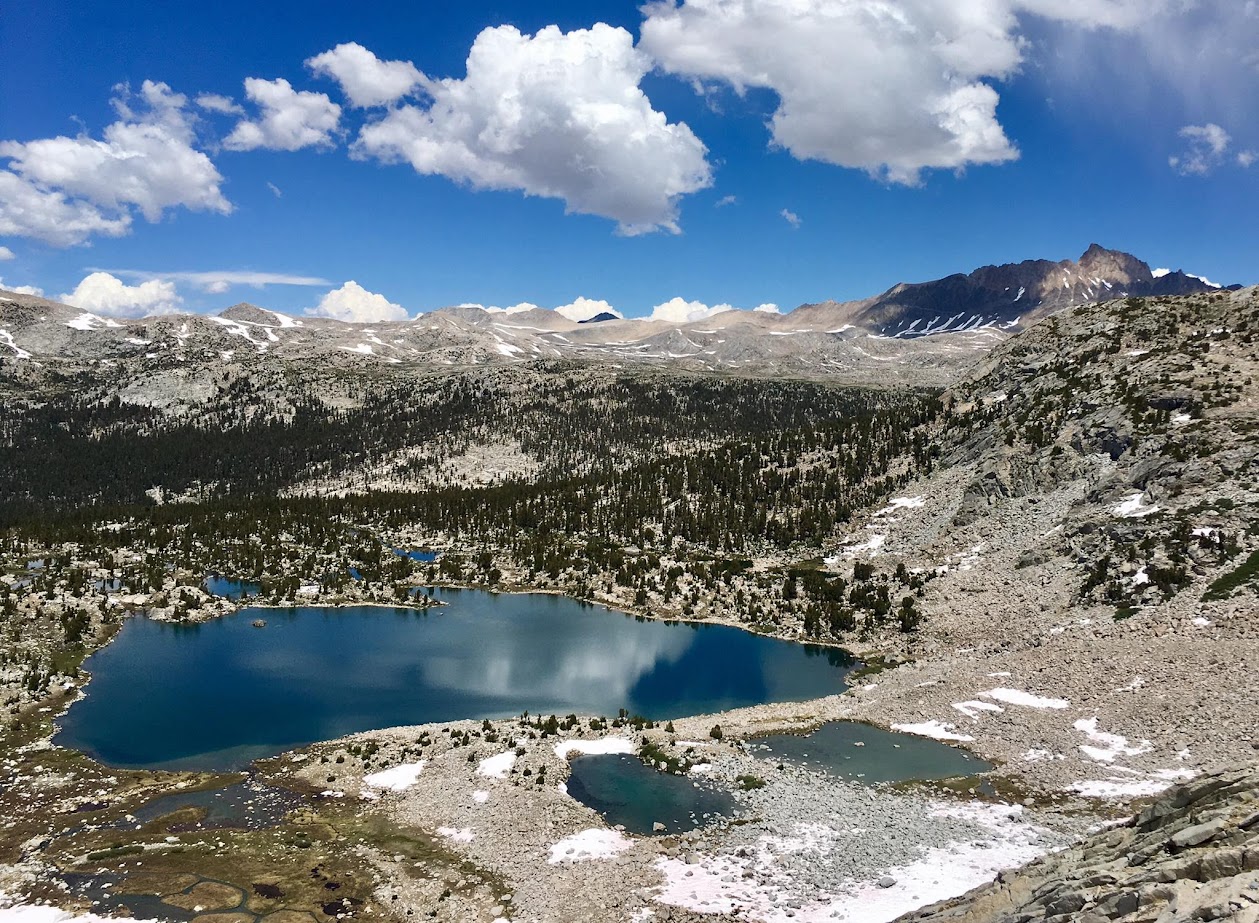 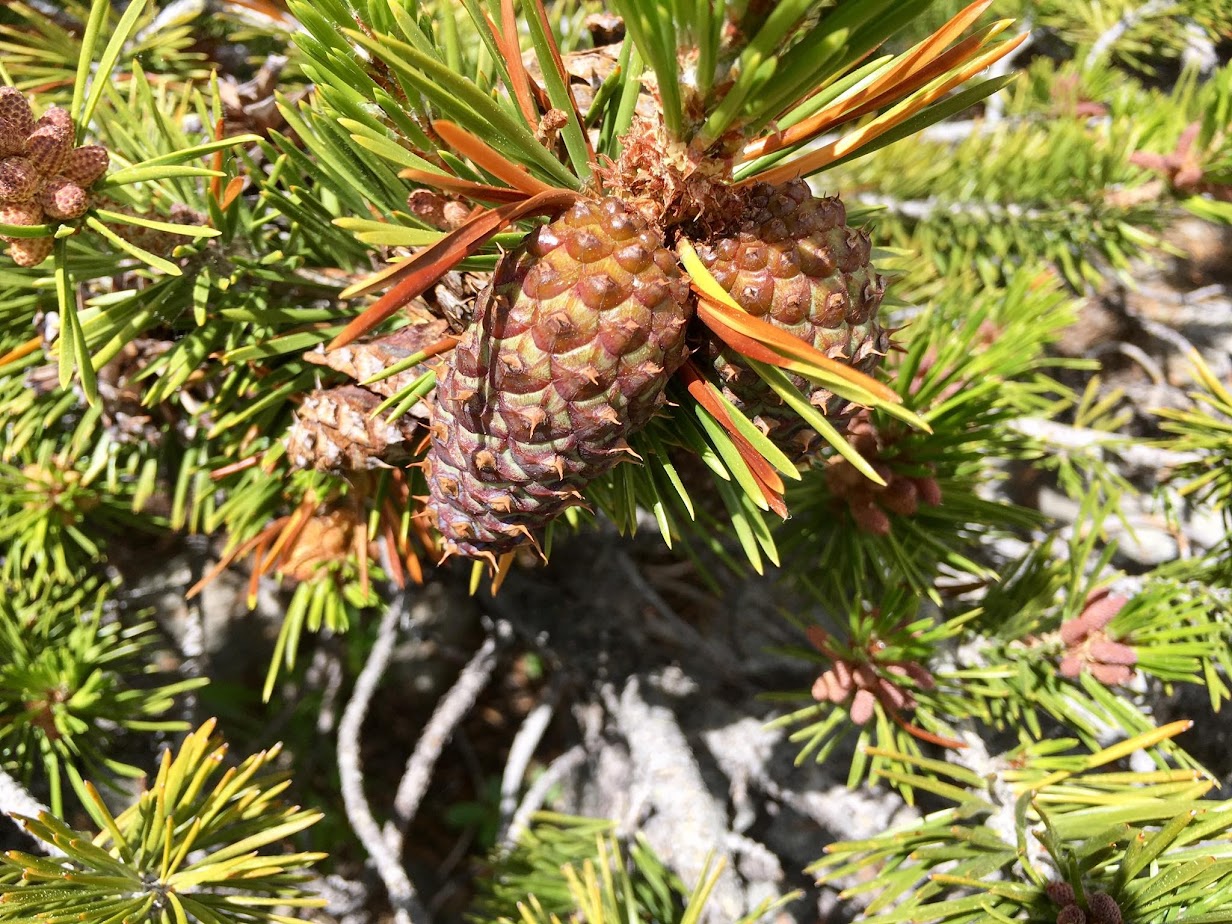 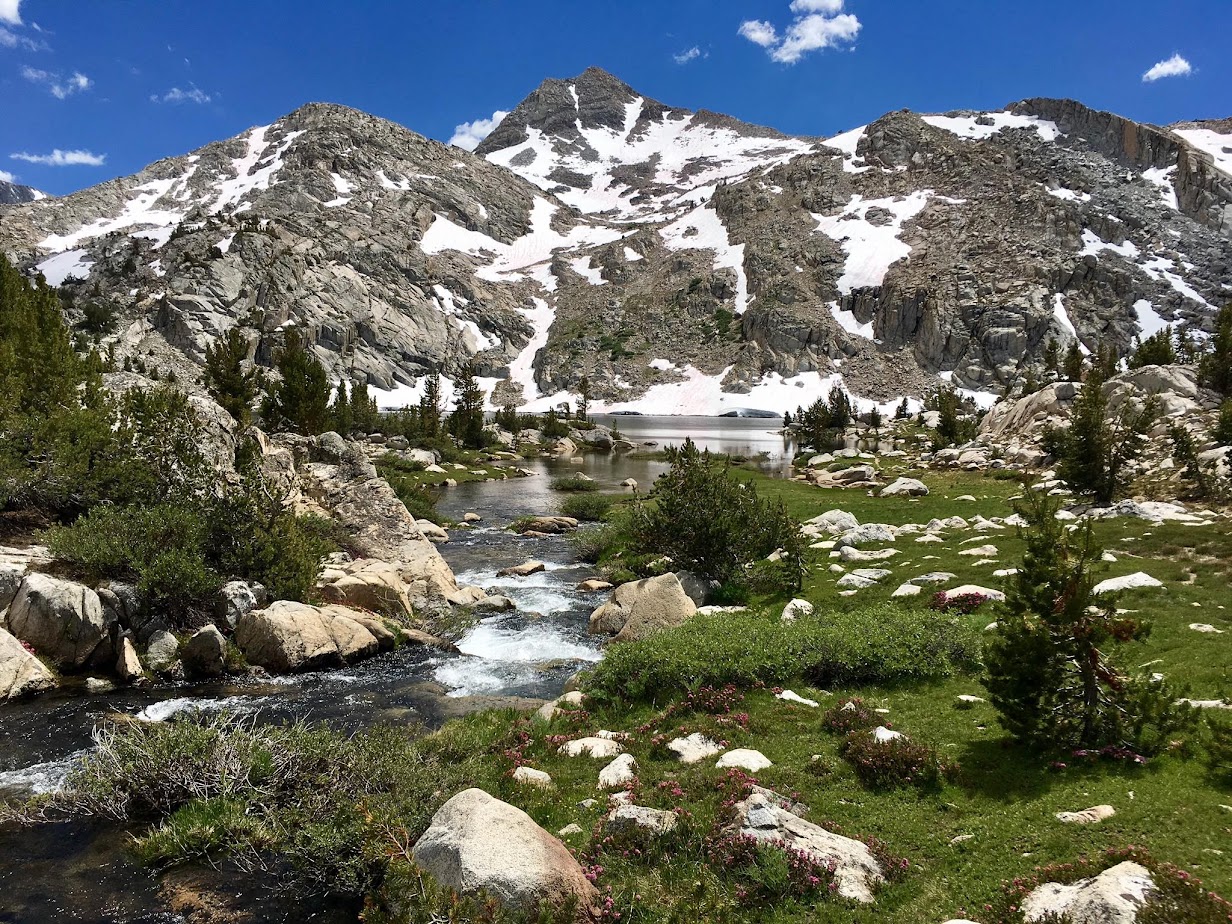 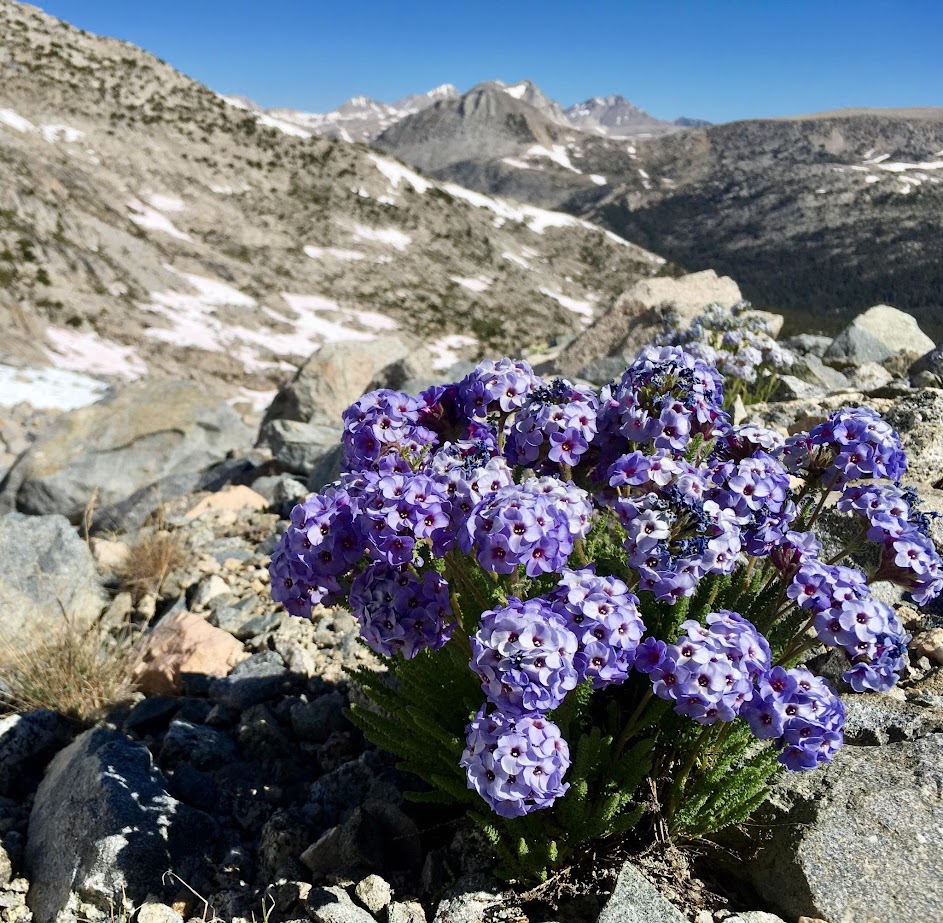 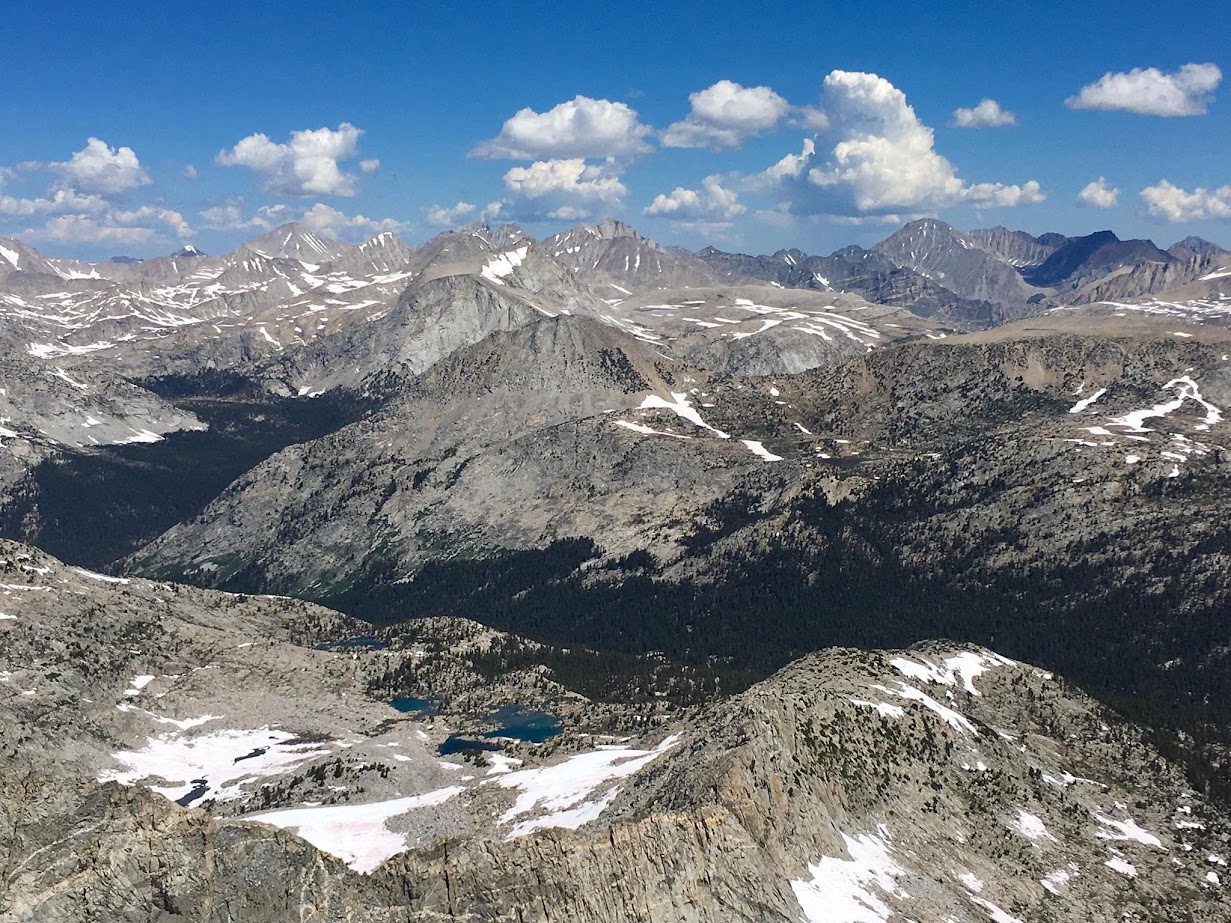 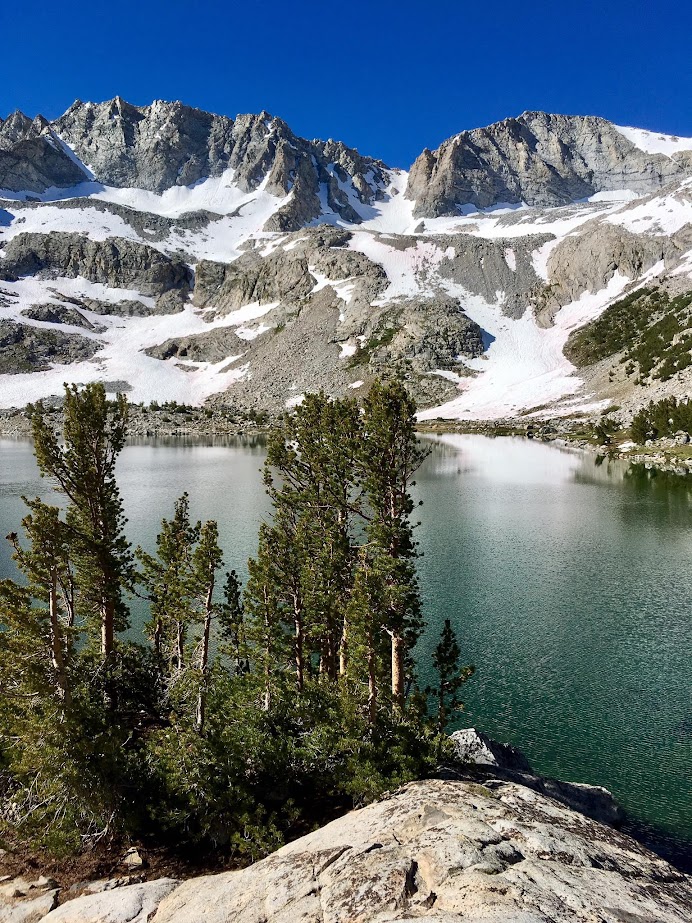 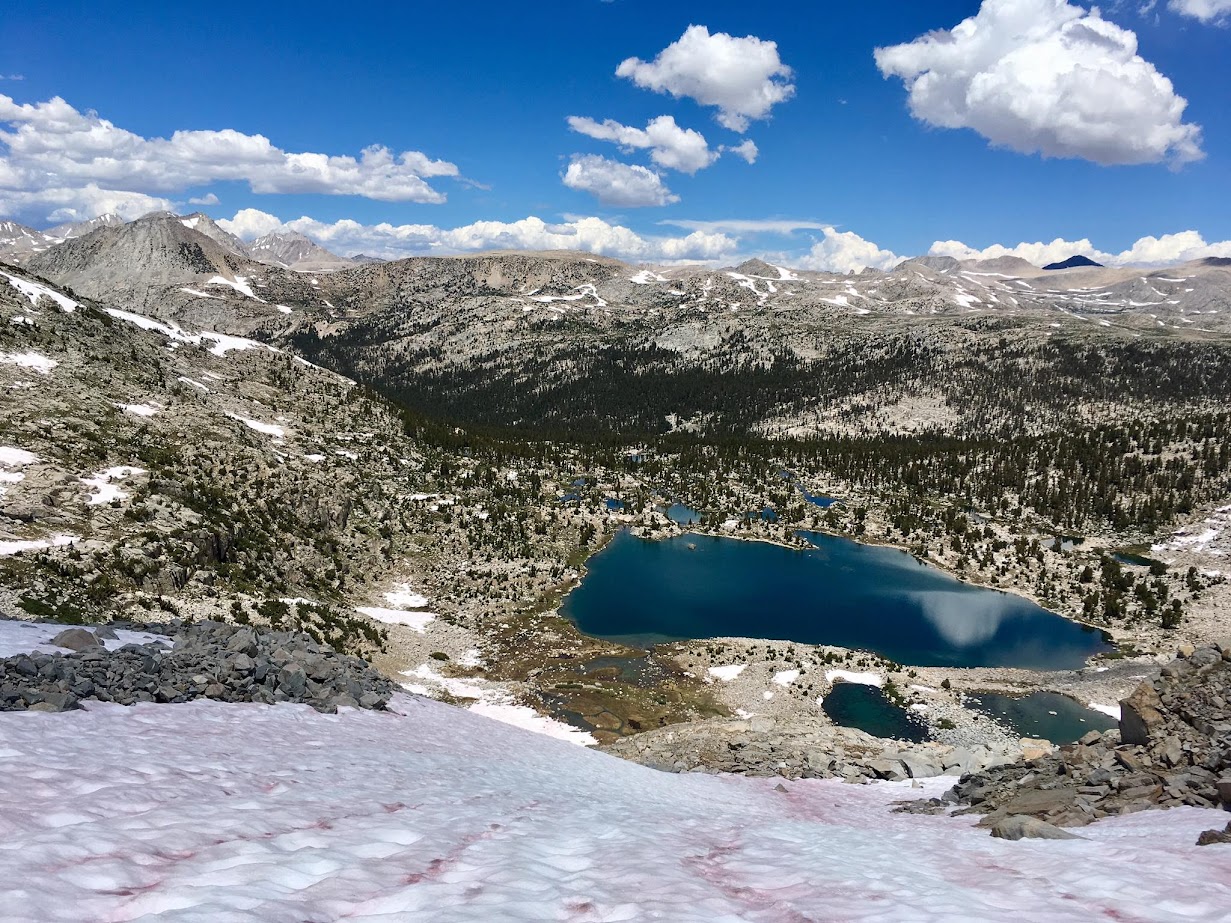 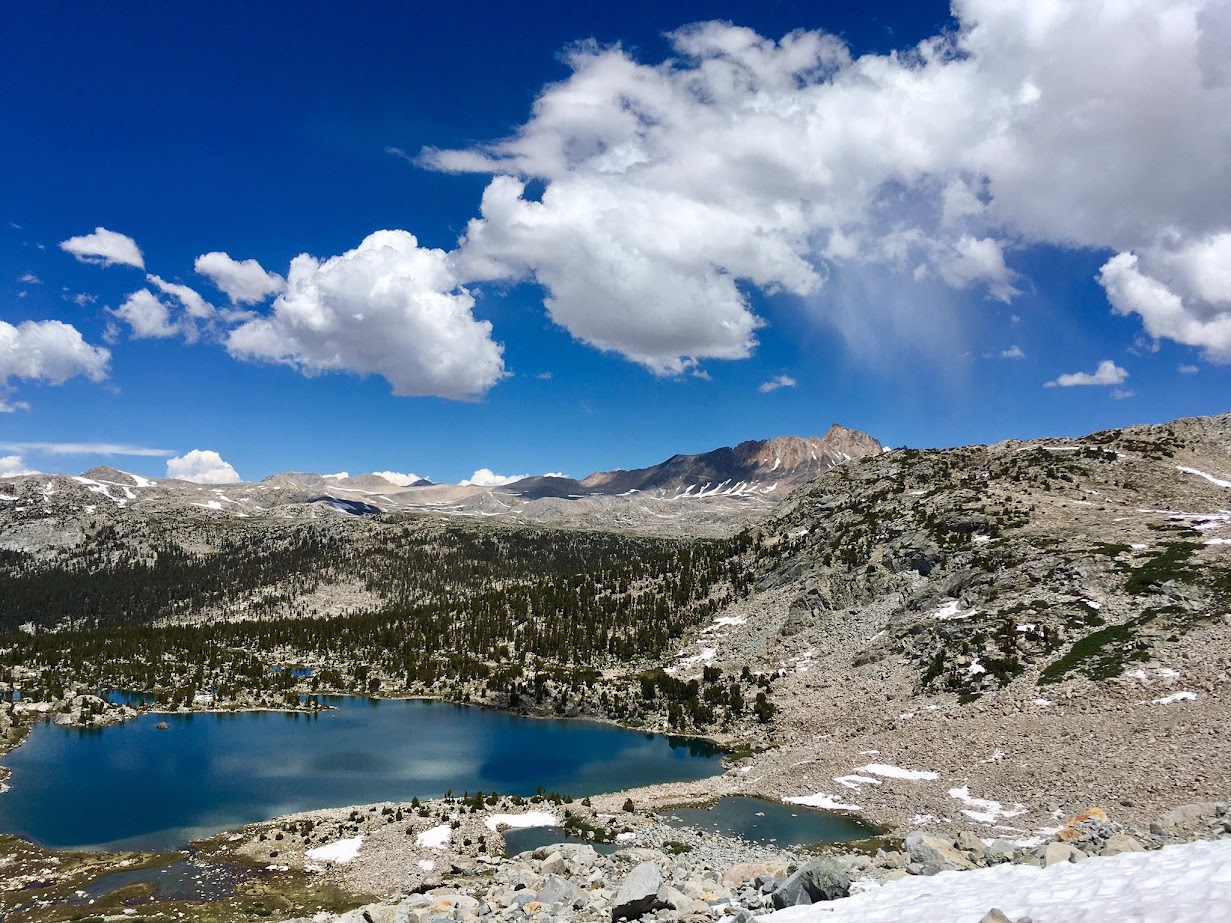 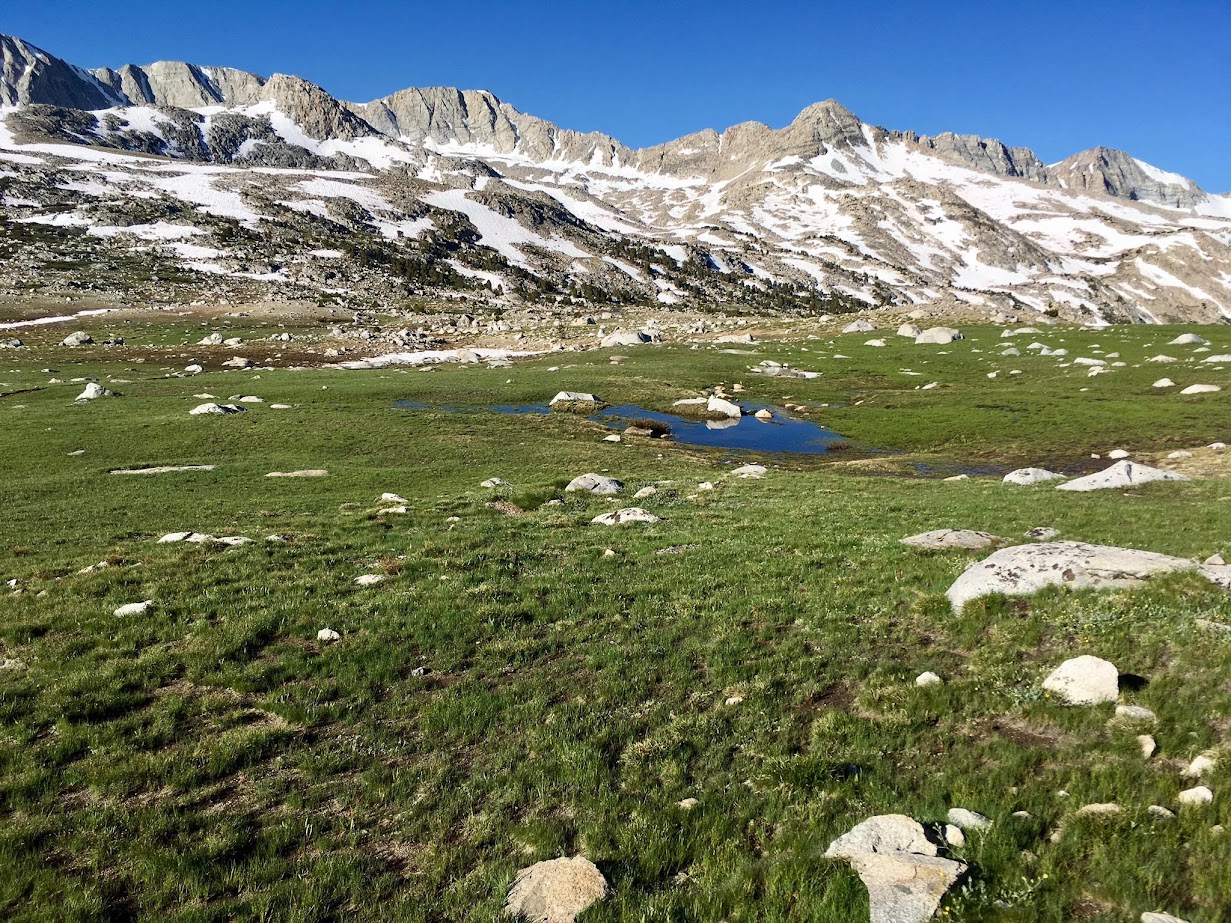