I seem to be drawn back to Lake Reflection every year, one of my favorite lakes in the High Sierra. The lake sits in a bowl underneath the high peaks of the Kings-Kern Divide and the Great Western Divide. Cliffs tumble to near the water’s edge and beautiful glacier polished granite slabs line the shoreline. The lake has just enough pines and foliage to give it an  alpine charm that is not found at higher lakes devoid of vegetation. On the way to the wonderful Lake Reflection one passes by East Lake, another Sierra gem. On a calm morning the surrounding peaks reflect in the still waters creating a classic Sierra scene. It’s tough to beat the beauty of these two lakes and that’s the reason why I keep coming back. Full photo album here. The album and photos here are all iphone – maybe I’ll get to the photos from the dedicated camera someday! 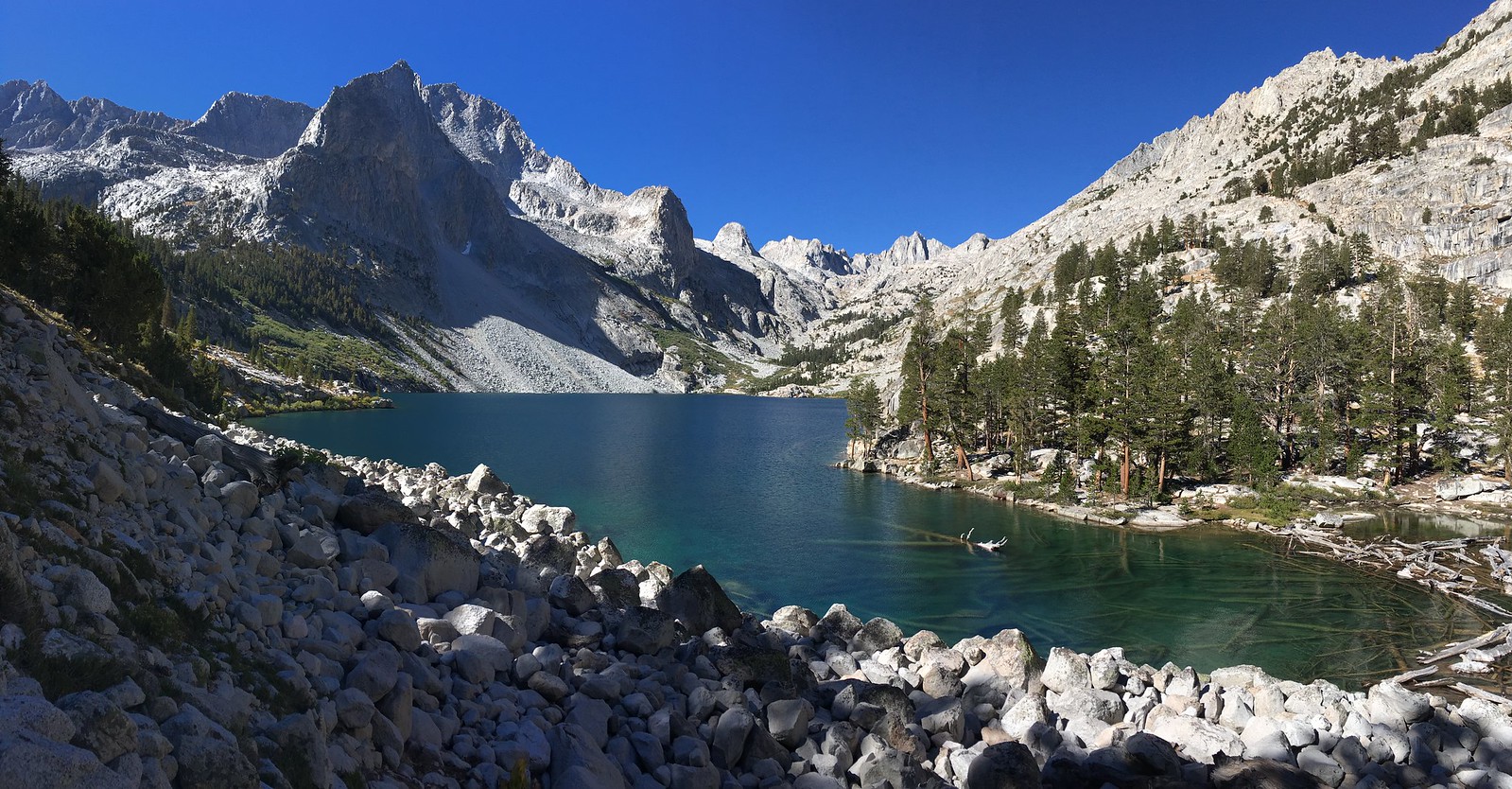 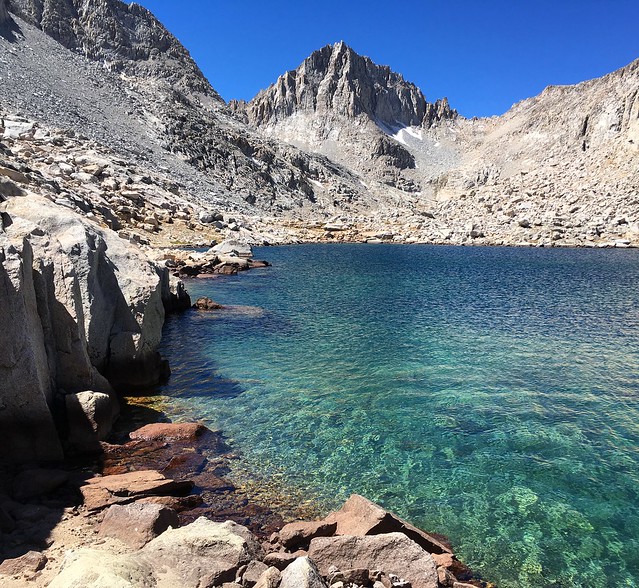 Fortunately, there are enough high peaks in the area that I’ve been able to climb something new each time I’ve visited Lake Reflection. Aside from another opportunity to photograph and enjoy the lakes, the objective this time was 13,550 ft Thunder Mountain, a spectacular peak at the north end of the highest section of the Great Western Divide including Milestone Mountain, Midway Mountain and Table Mountain. The mountain is particularly striking when viewed from the north and is one of the more remote peaks in the High Sierra. I’ve looked at the mountain from all different angles and it was somewhat surprising  to me that I hadn’t climbed it until now, but I’m glad I reserved this magnificent peak for a picturesque and crisp late summer day. 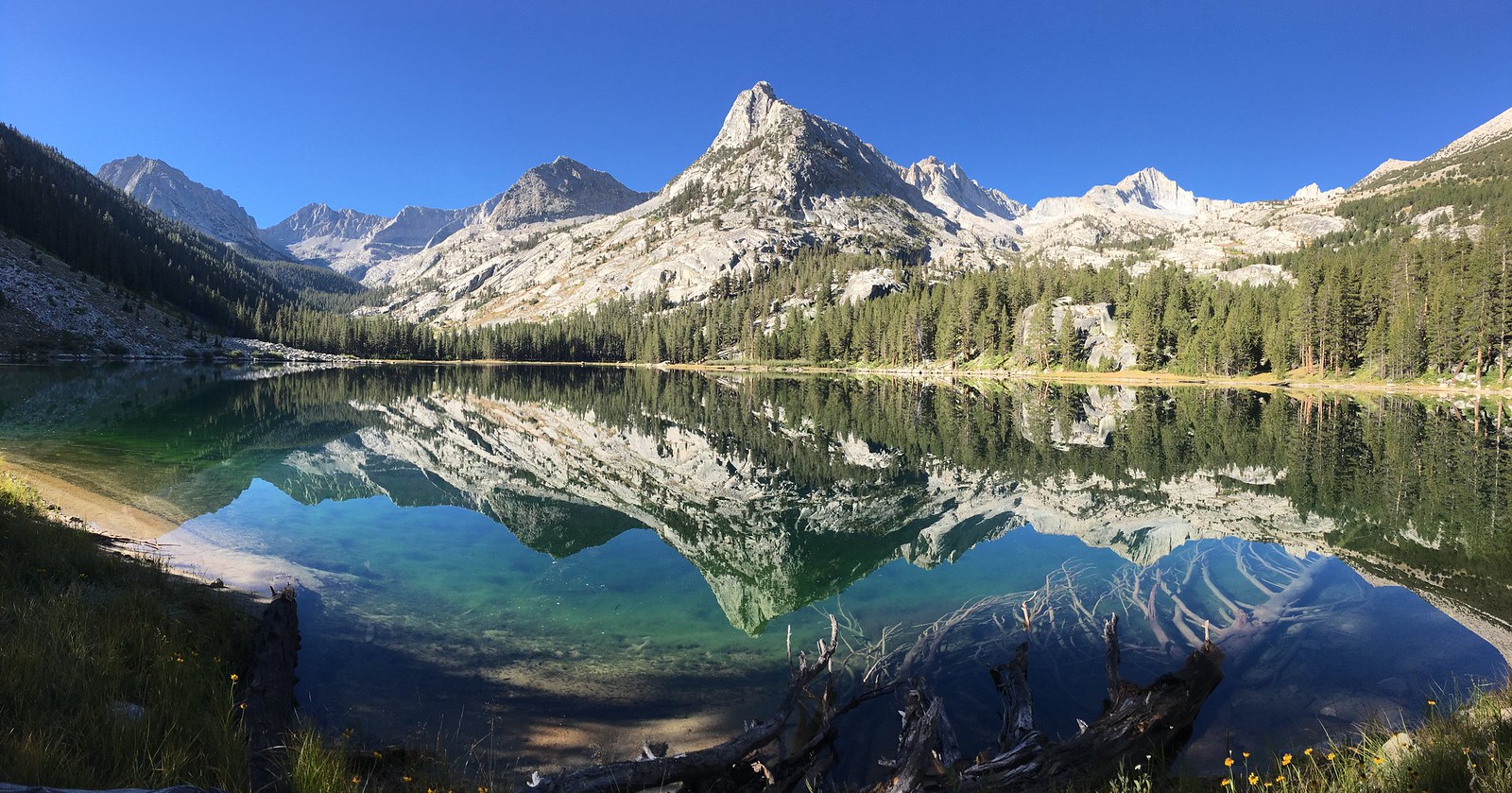 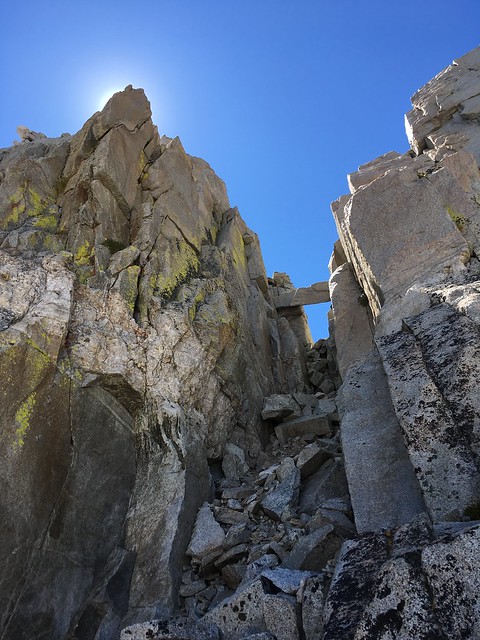 From Road’s End it would be over 19 miles each way to the summit of Thunder Mountain and nearly 9,500 feet of cumulative elevation gain (Strava route here). After 15 miles on trail to the outlet of Lake Reflection from Road’s End, it’s only about 4 miles from there to the summit, but it’s all off-trail and includes some navigation through steep granite slabs and a lot of slow going, arduous talus hopping. While the talus is difficult, the scenery continues to impress and more than compensates for the tediousness. The initial climb up from Lake Reflection reveals awesome views looking back at the lake and Deerhorn Mountain’s rugged north face. Farther up, the dramatic east face of Sky Pilot Peak dominates the view. Upon rounding a corner, one is treated to a fantastic series of rockbound lakes. Unlike Lake Reflection 2,000 feet below, these lakes have virtually no vegetation, but each posses beautiful clear waters with the pyramidal-shaped Thunder Mountain towering above. 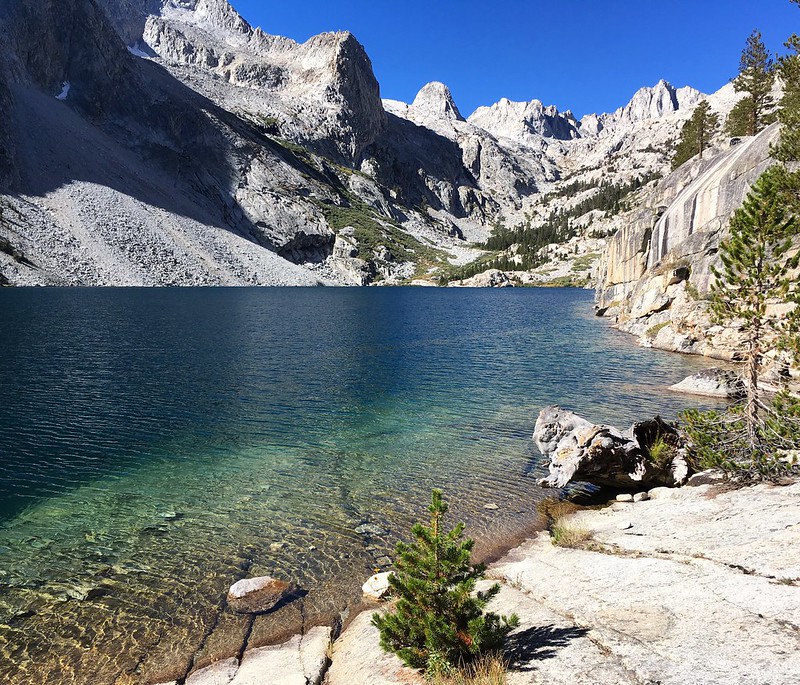 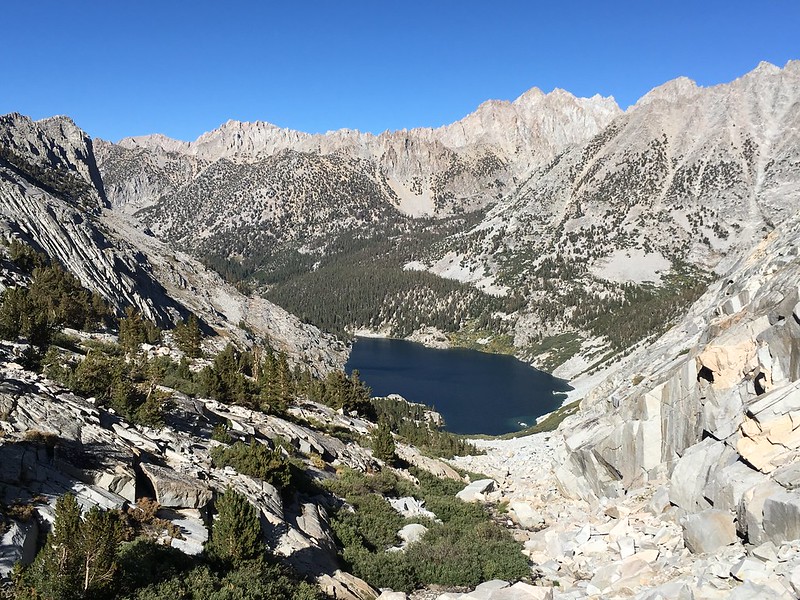 The standard route to climb Thunder Mountain from Lake Reflection ascends to Thunder Pass which is an absolute mess of loose rock, gravel and sand, followed by somewhat more solid class 2 terrain to the south summit and then some exposed class 3 traversing to the summit block on the north summit. In 2008, Bob Burd pioneered a new route up Thunder Mountain that would avoid the tedious climb up to Thunder Pass and deposit one at a notch between the south and middle summits. This notch includes a unique rock bridge/window. Bob’s “east face/east chute” route uses a right hand chute on the east face of the mountain to ascend above the initial cliffy headwall and utilizes some ledges to move into the central/main chute which goes all the way up to the notch. From the lakes beneath Thunder Mountain this route looks steep and improbable for class 3 but once on the route it’s surprisingly straightforward and goes at class 3. Kudos to Bob Burd for trying this route. As a first ascentionist I can understand why there would have been some uncertainty that the route would go as a scramble.  I also second Bob’s conclusion that this is a far superior ascent route versus the extremely tedious climb up to Thunder Pass. 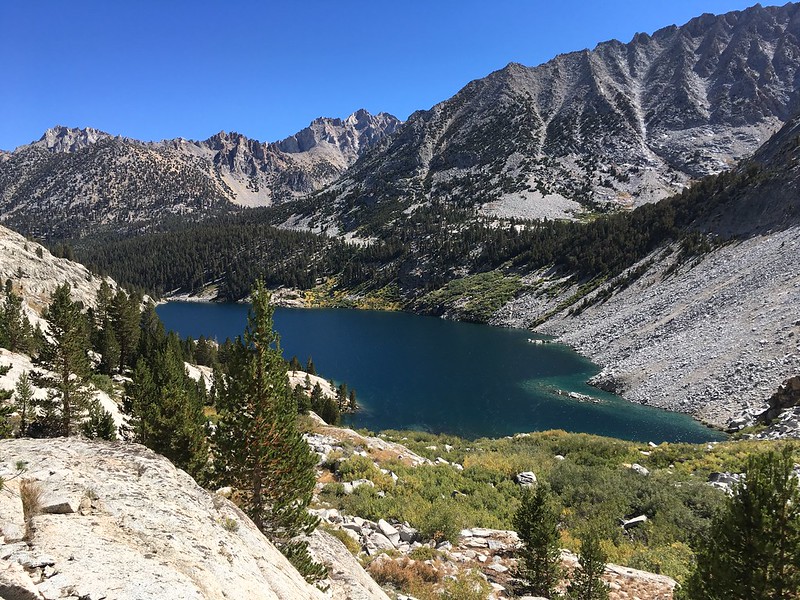 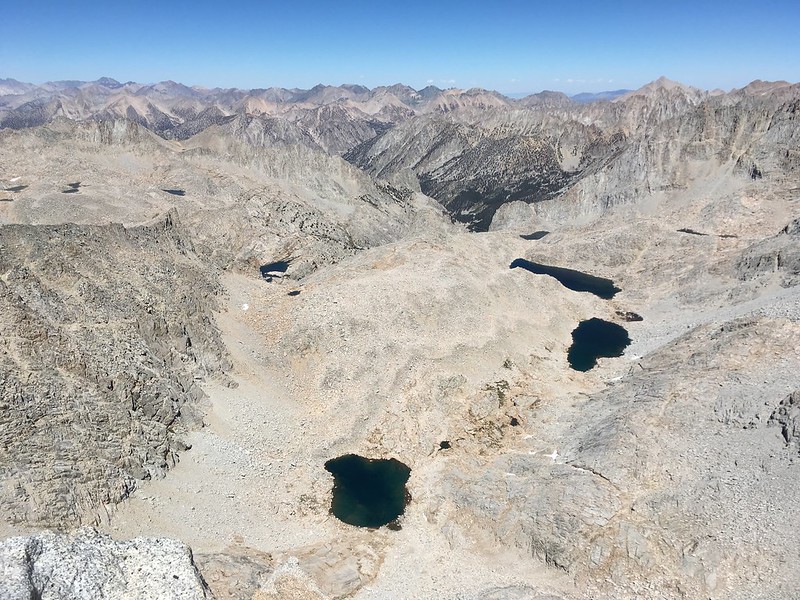 From the rock bridge some exposed class 3 scrambling brings one to the summit block which has a class 4 move using a chock stone in a crack. As expected, the summit views from Thunder Mountain are awesome and include everything from the Goddard Divide to the Palisades to Mountain Whitney. I particularly enjoyed the views to Cloud Canyon, the Whaleback and Glacier Ridge. On the way back I crossed over the rock bridge and traversed over the south summit which has nice unobstructed views to a lake south of Thunder Pass with Sierra Crest from Mount Williamson to Mount Whitney rising behind. The south summit also has a nice view looking back to the middle and north summits and the high peaks of the Great Western Divide. In particular, one can grasp just how big Table Mountain is – flattish at the top but surrounded by a myriad of complex cliffs and chutes on all sides. 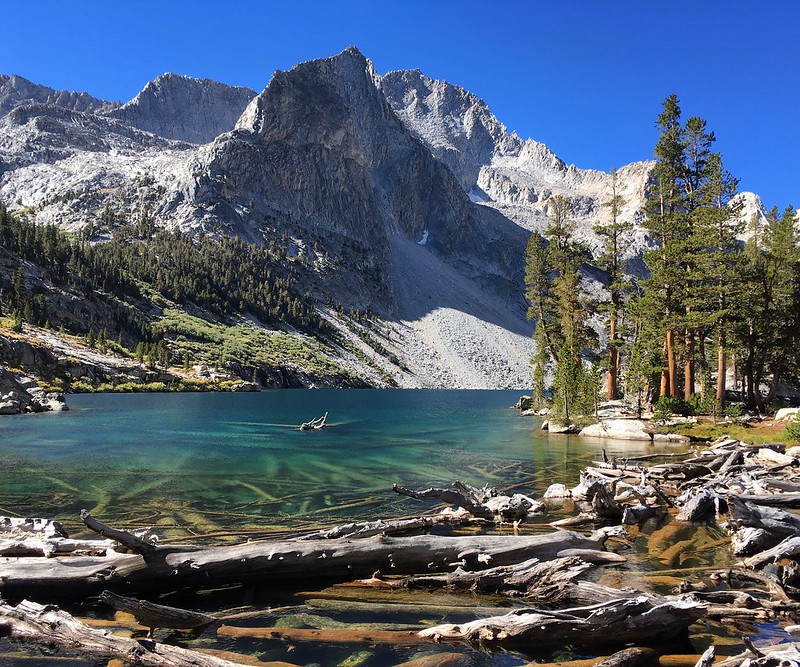 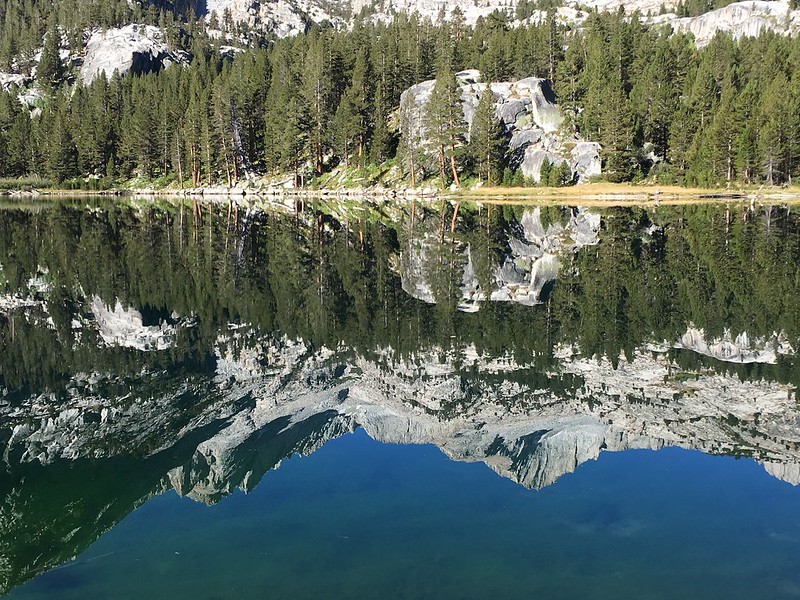 Coming down from Thunder Pass I tried to find some terrain that was conducive to plunge stepping and was successful for a couple hundred vertical before the terrain turned into loose rocks. Fortunately some remaining snow patches helped with some of the descent. The descent down to Lake Reflection in afternoon light was delightful and I soon found myself doing the familiar run down Bubbs Creek with evening light on Mount Bago, Bubbs Creek Wall and Charlotte Dome.  As darkness closed in on the canyon I was already dreaming up more reasons to come back Lake Reflection 🙂

Full photo album (iphone) here.  I brought my dedicated camera and took a lot of photos with it as well but who knows when I will get to looking at those photos. 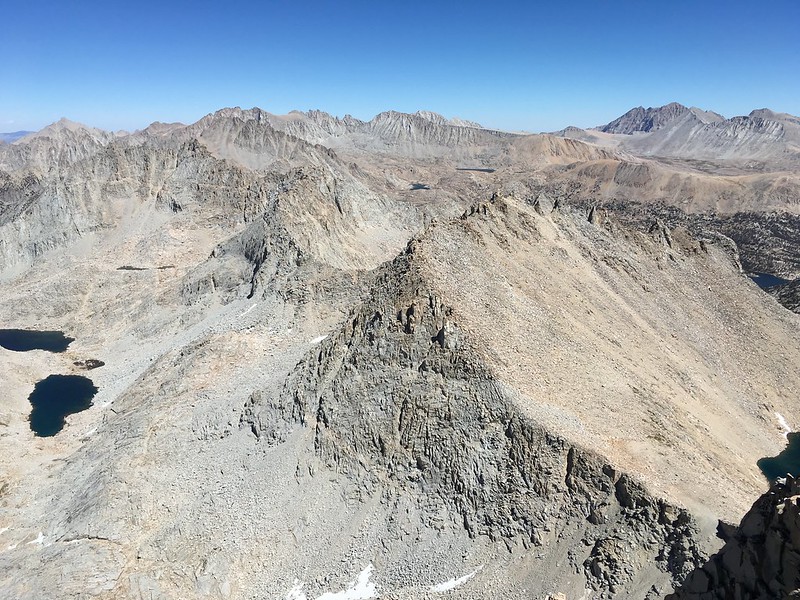 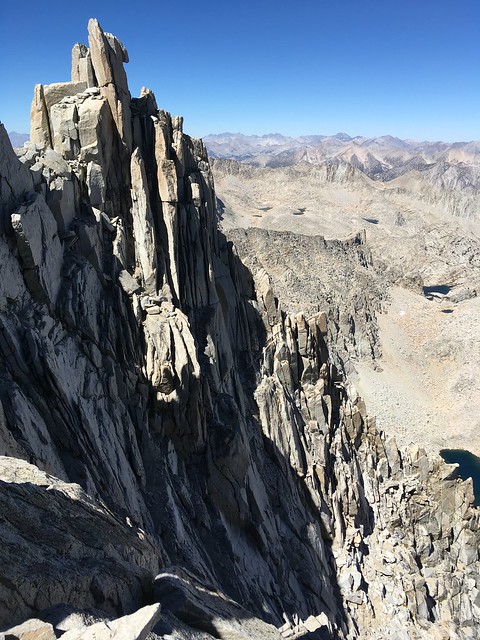 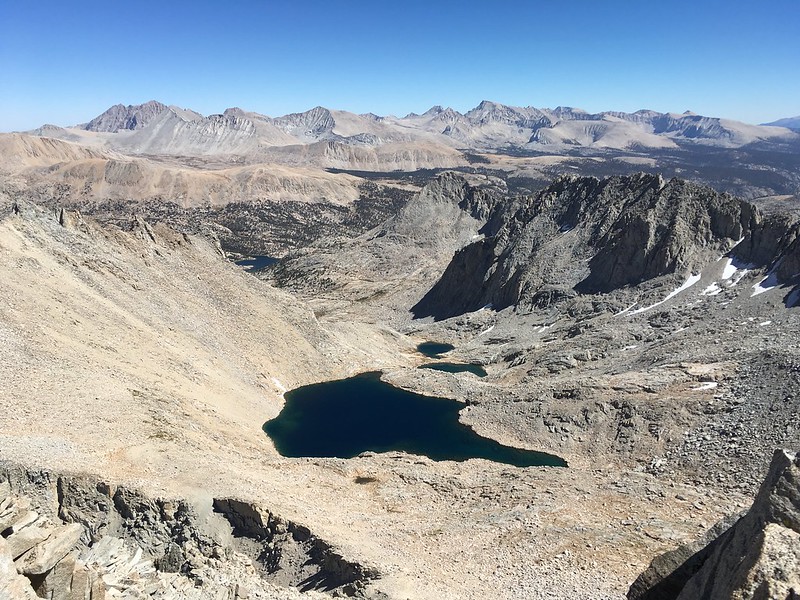 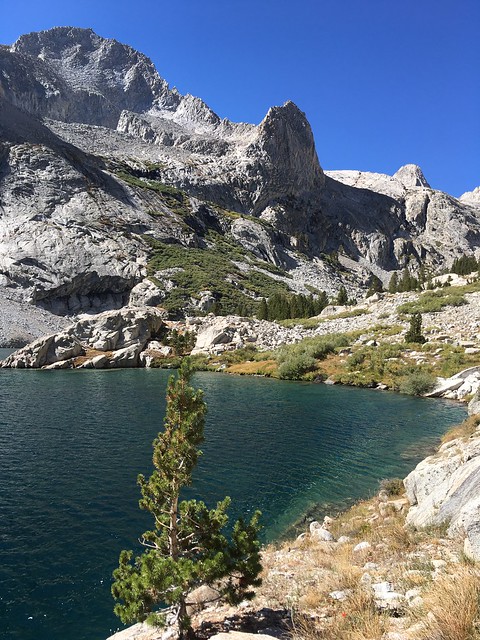 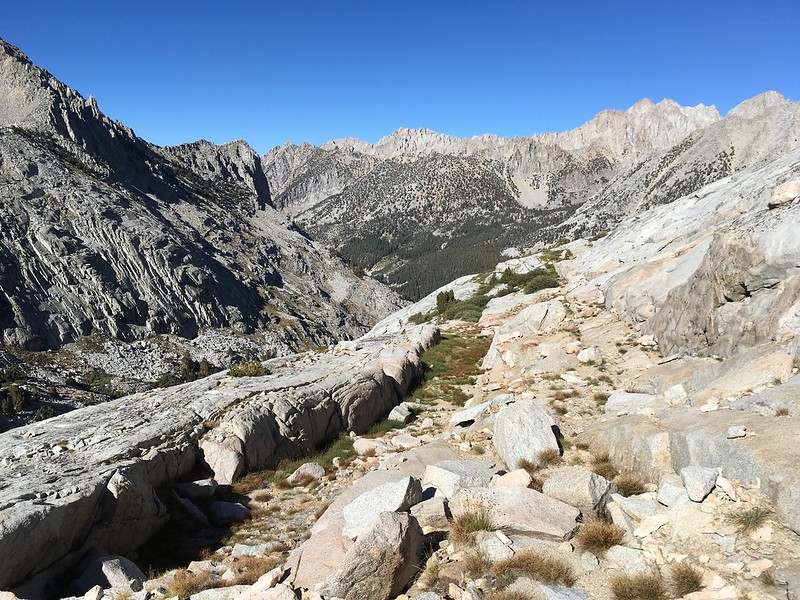 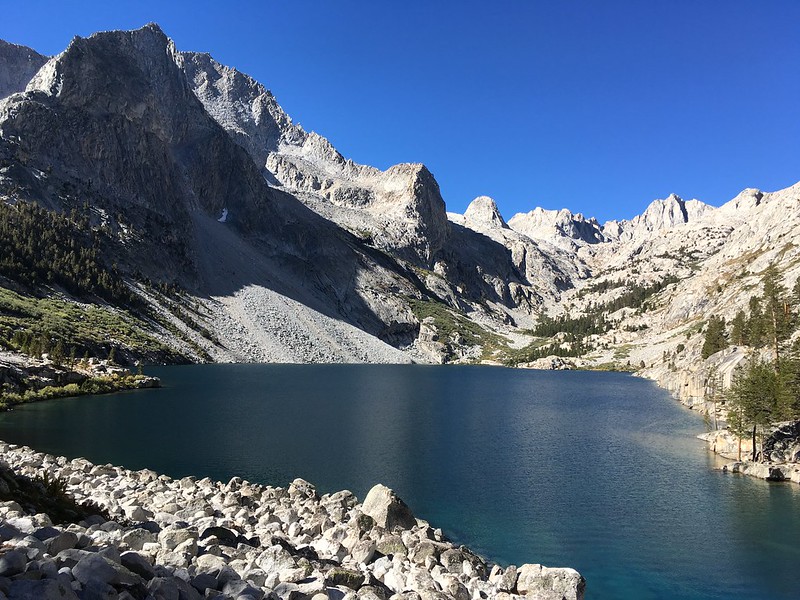 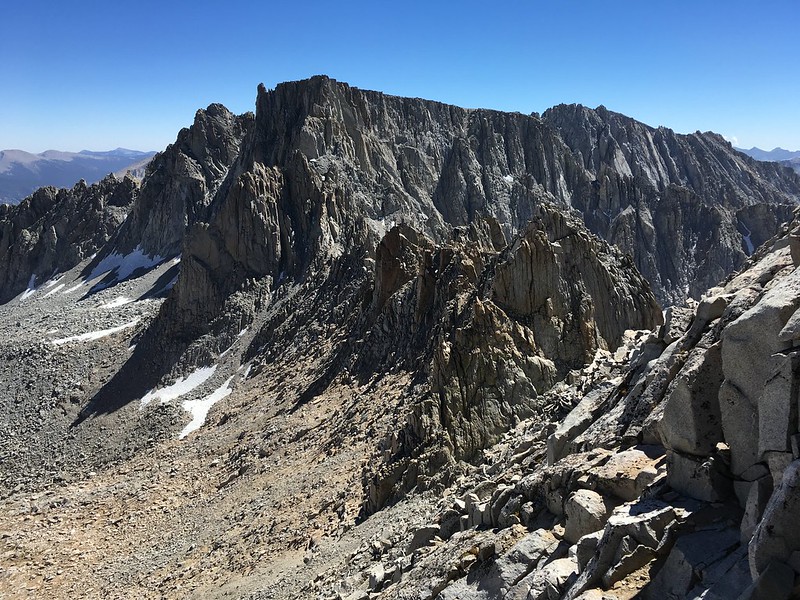 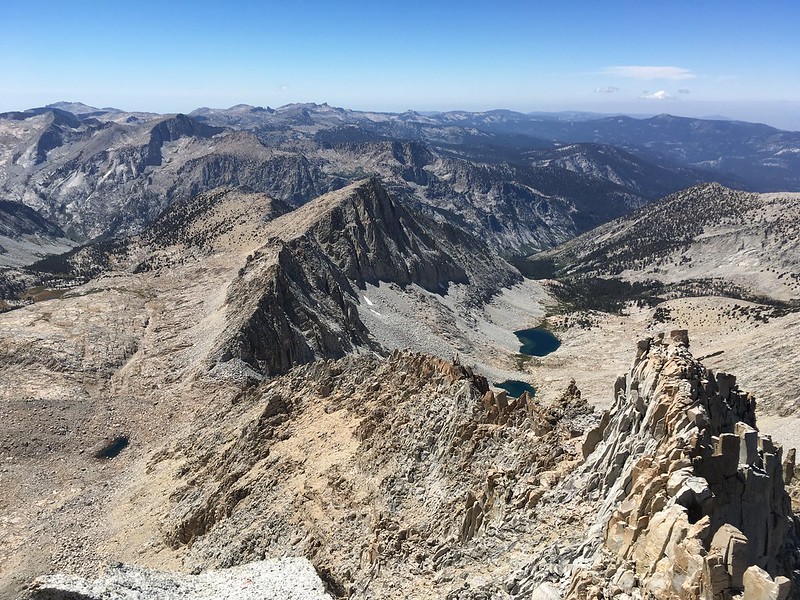 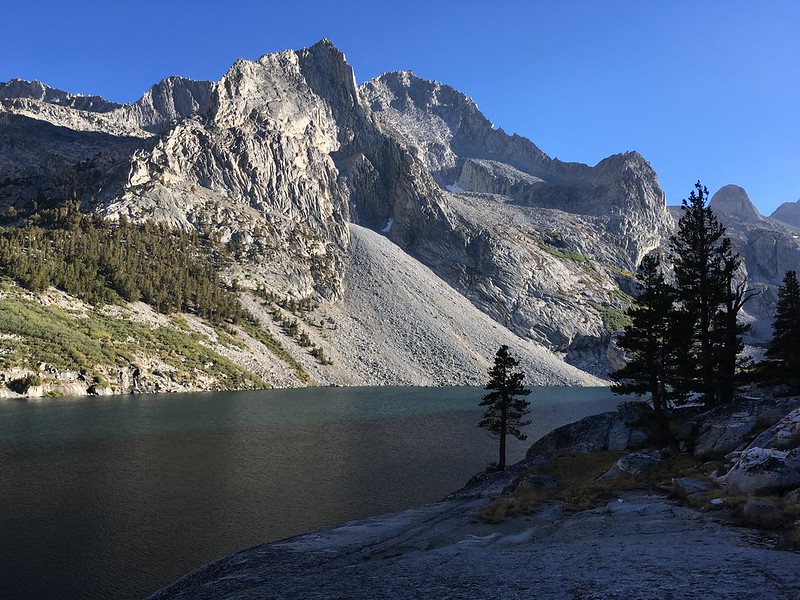 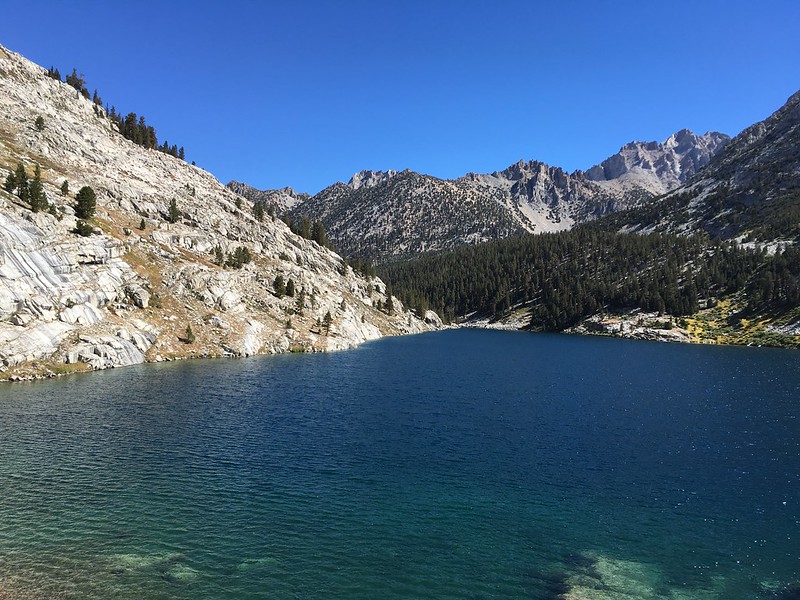 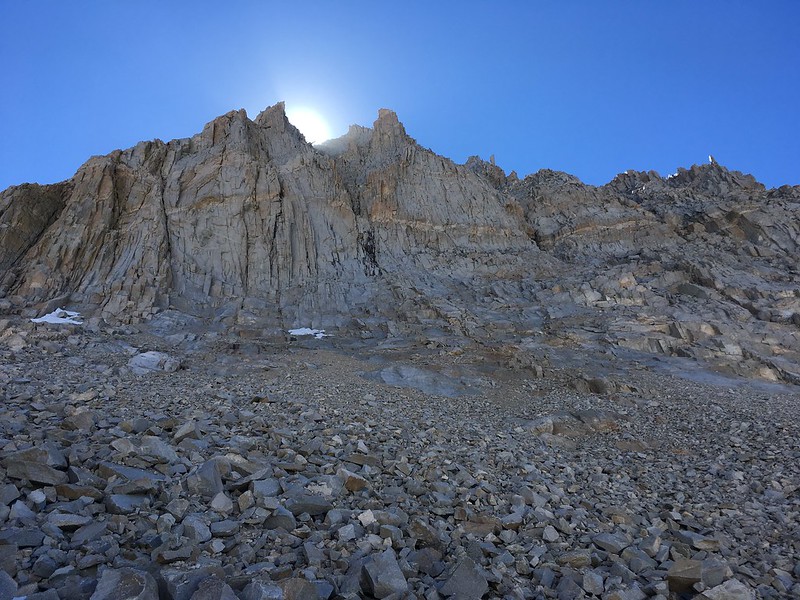 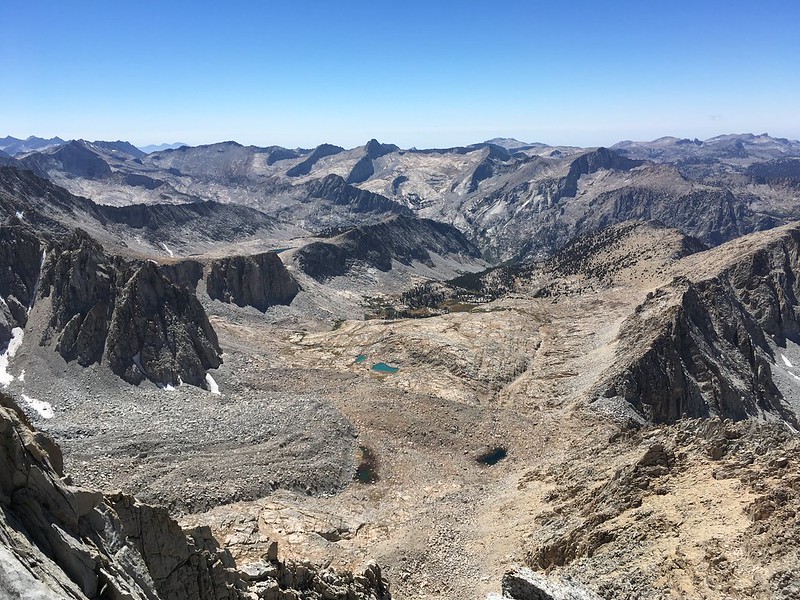 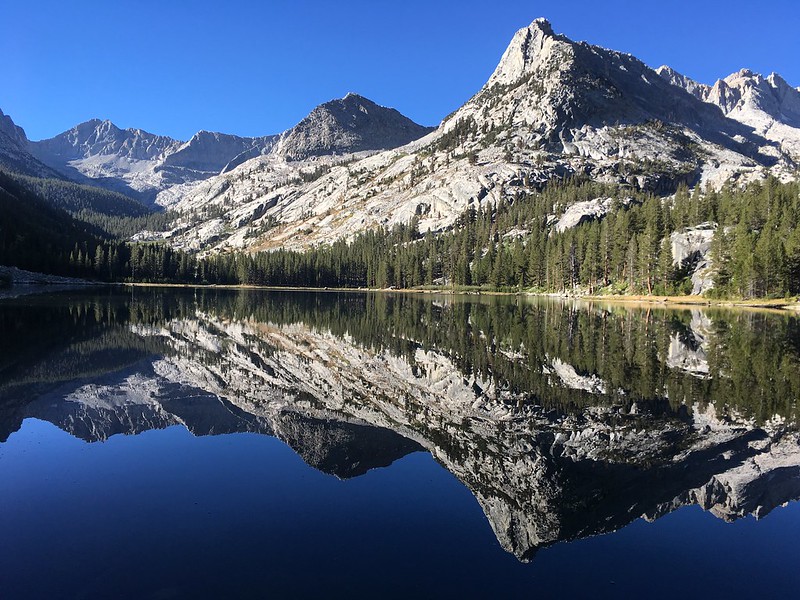