This was my third time visiting the exceptionally scenic region beneath Granite Dome. In both 2012 and 2014 visits were in early June and most of the lakes were melted out. This time a full month later in early July the lakes were mostly frozen; a testament to the unprecedented High Sierra snowpack received in the winter of 2017. What made this visit special was the colorful ice pools in the lakes, including a heavenly blue pool in Upper Lewis Lake and a stunning teal turquoise color in Ridge Lake. In addition, Iceland Lake was only partially melted out with icebergs and an array of ice colors from green to blue. Similar to my first visit in 2012, I ascended to the top of Granite Dome which has great views of the Emigrant Wilderness and Northern Yosemite. Tower Peak is particularly striking to the east. The crux of the trip was crossing Summit Creek which was raging like a river. There was one safe log over the creek in the vicinity I needed to cross. It was mostly dry in the morning but by afternoon it was wet and I had to carefully scoot across while keeping my feet sufficiently out of the water so the swift current would not pull me in!  It also didn’t help that I had turned my ankle on trail run in and was relegated to walking (carefully) the rest of the outing. Complete photo album here.  Route on Strava here. 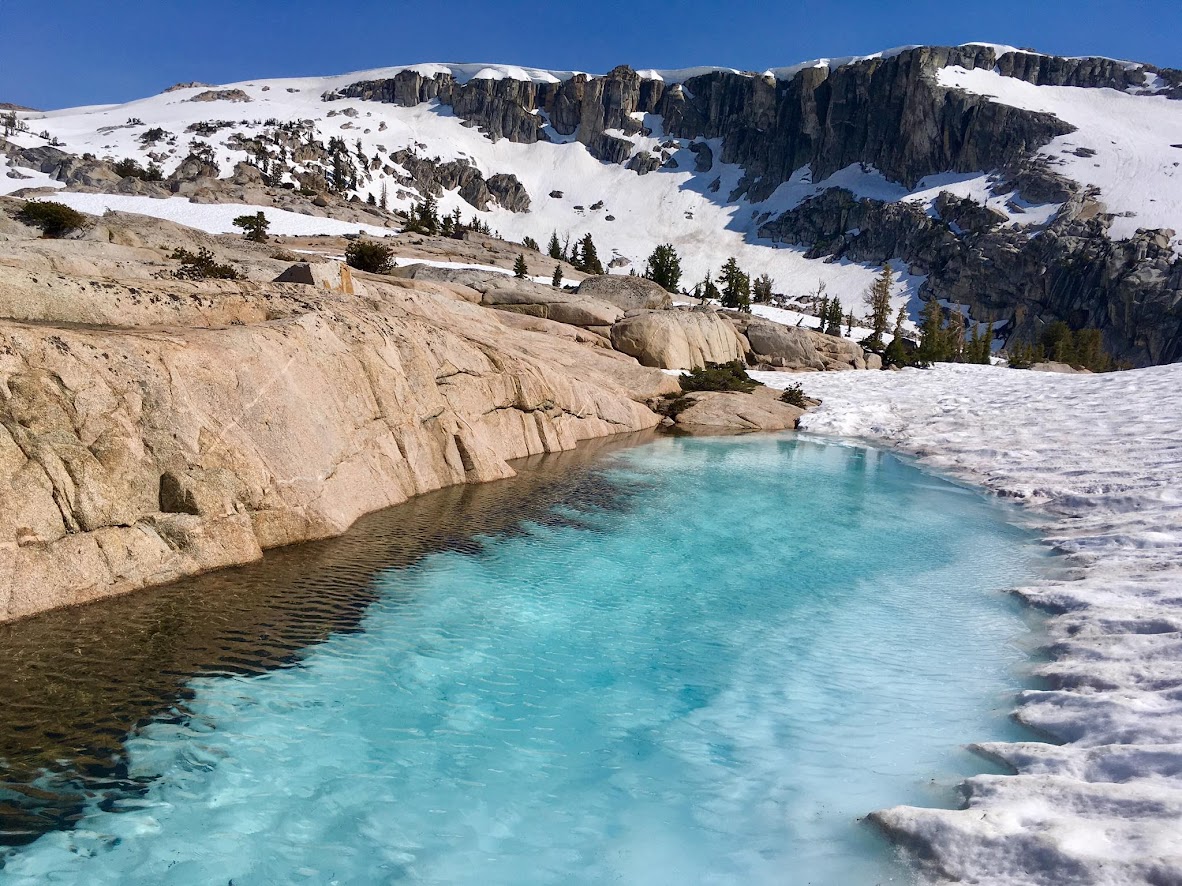 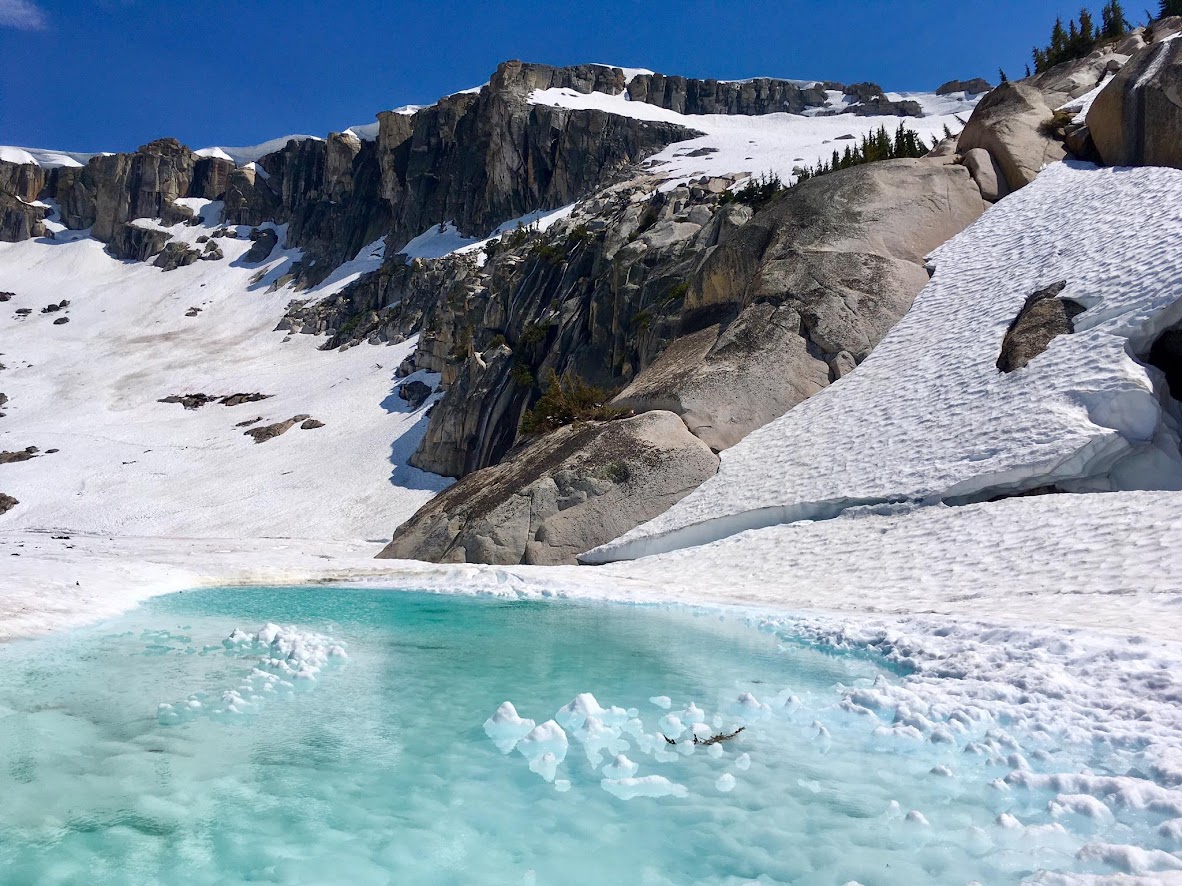 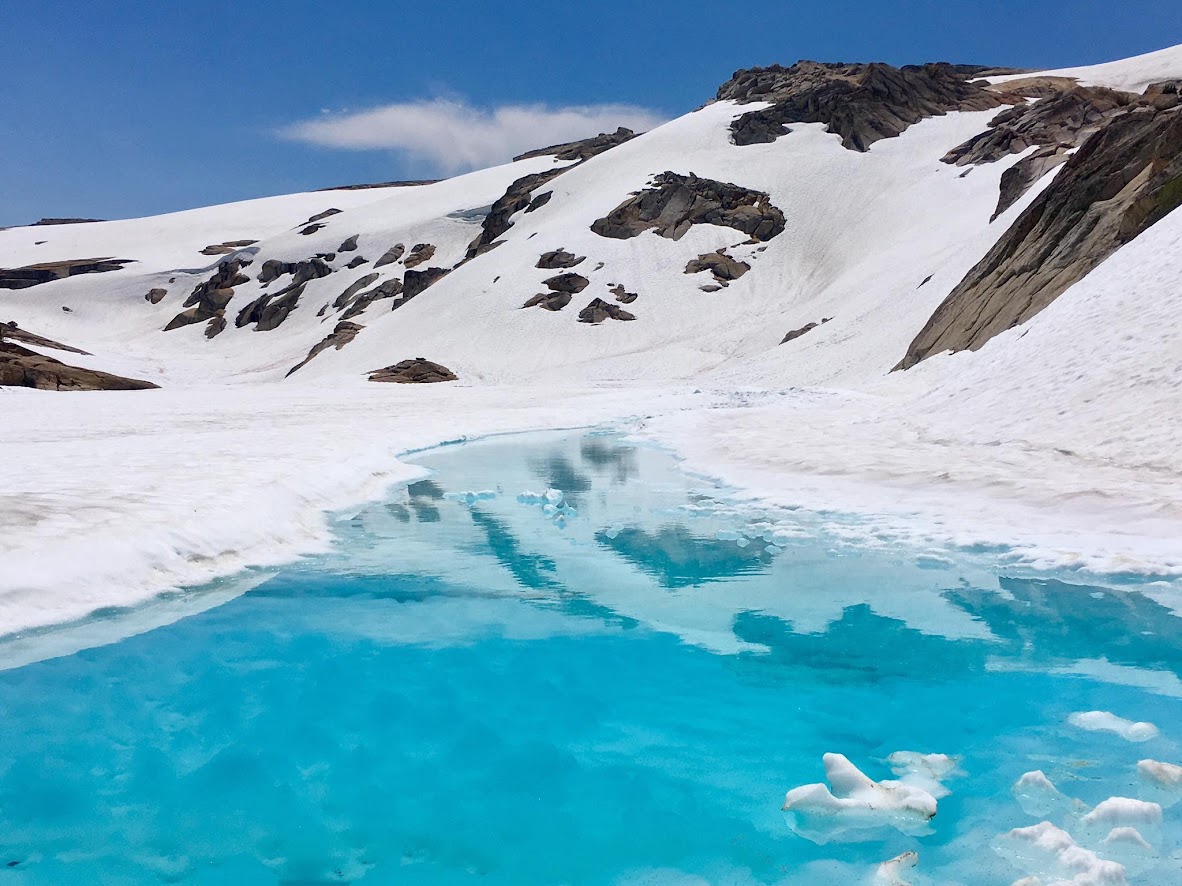 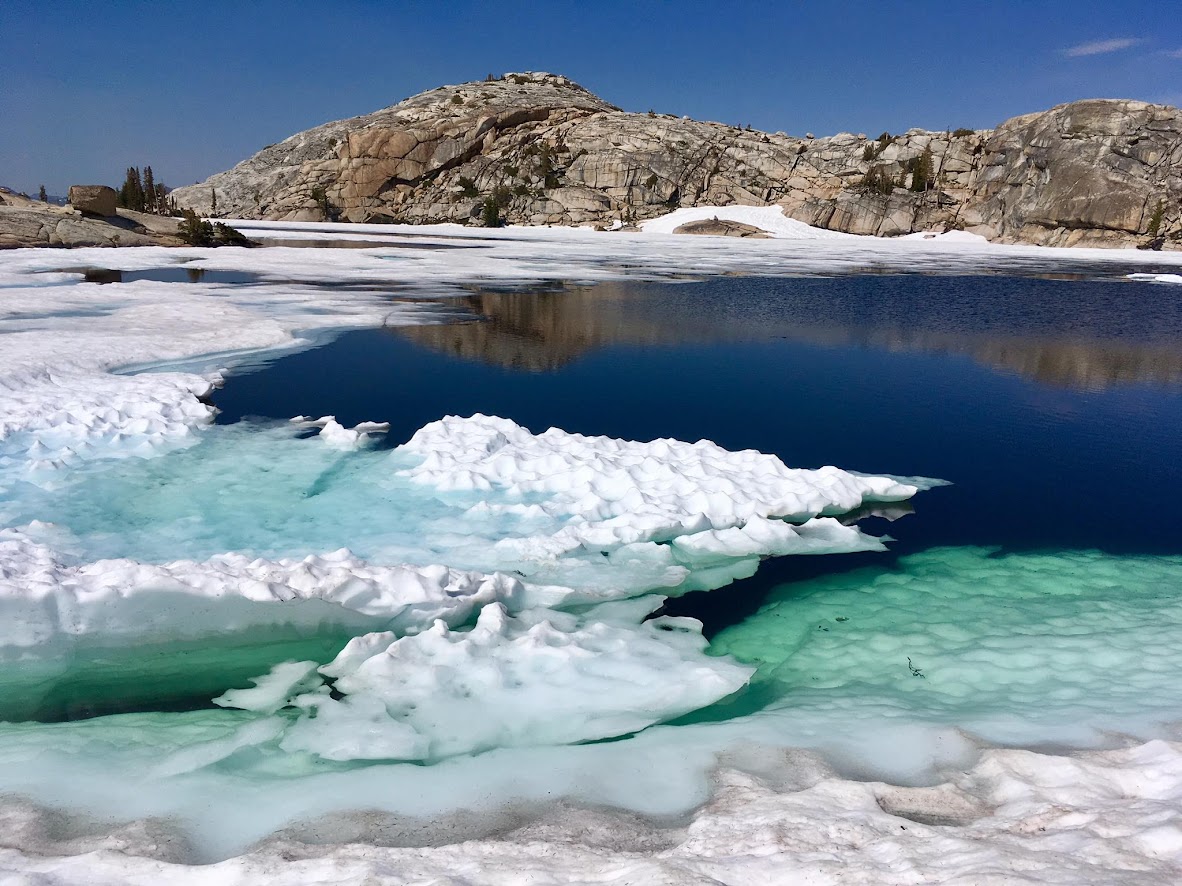 Granite Dome is an immense granite massif with numerous micro-basins occupied by a series of stunning alpine lakes set amid granite slabs and cliffs. I like to describe this region as the “Granite Balconies” since each of the lakes can be viewed from above on granite slabs. All of the lakes are located on the northern side of a broad, massive ridge called Granite Dome. The summit is a fairly nondescript and non-prominent point along the ridge. The region is characterized by ubiquitous ice polished granite carved into its present form by glaciers that blanketed this region over millennia. No trails travel into this area making it a relatively infrequently visited spot where solitude and ample room for exploration can be found. While the northern side of Granite Dome is rugged, the south side features more subdued terrain and no lakes until much farther down in the Emigrant Wilderness. The region is accessed via Kennedy Meadows off of the Sonora Pass Highway and includes a moderately steep trail to reach Relief Reservoir and beyond. The off-trail travel is fairly easy with navigation on friendly granite slabs. The primary objective in route finding on this terrain is to avoid steeper sections of granite that can become cliffs. The named lakes of the region include the Lewis Lakes (lower, middle, upper), Sardella Lake, Ridge Lake and Iceland Lake with a numerous other smaller tarns. Ridge Lake is arguably the centerpiece nestled beneath the towering cliffs of Granite Dome with waterfalls splashing down into the lake from the upper reaches of the peak. However, Middle Lewis Lake is perhaps the most dramatic with towering granite cliffs surrounding its shores like an amphitheater. Furthermore, the view overlooking Iceland Lake from the south is fantastic. 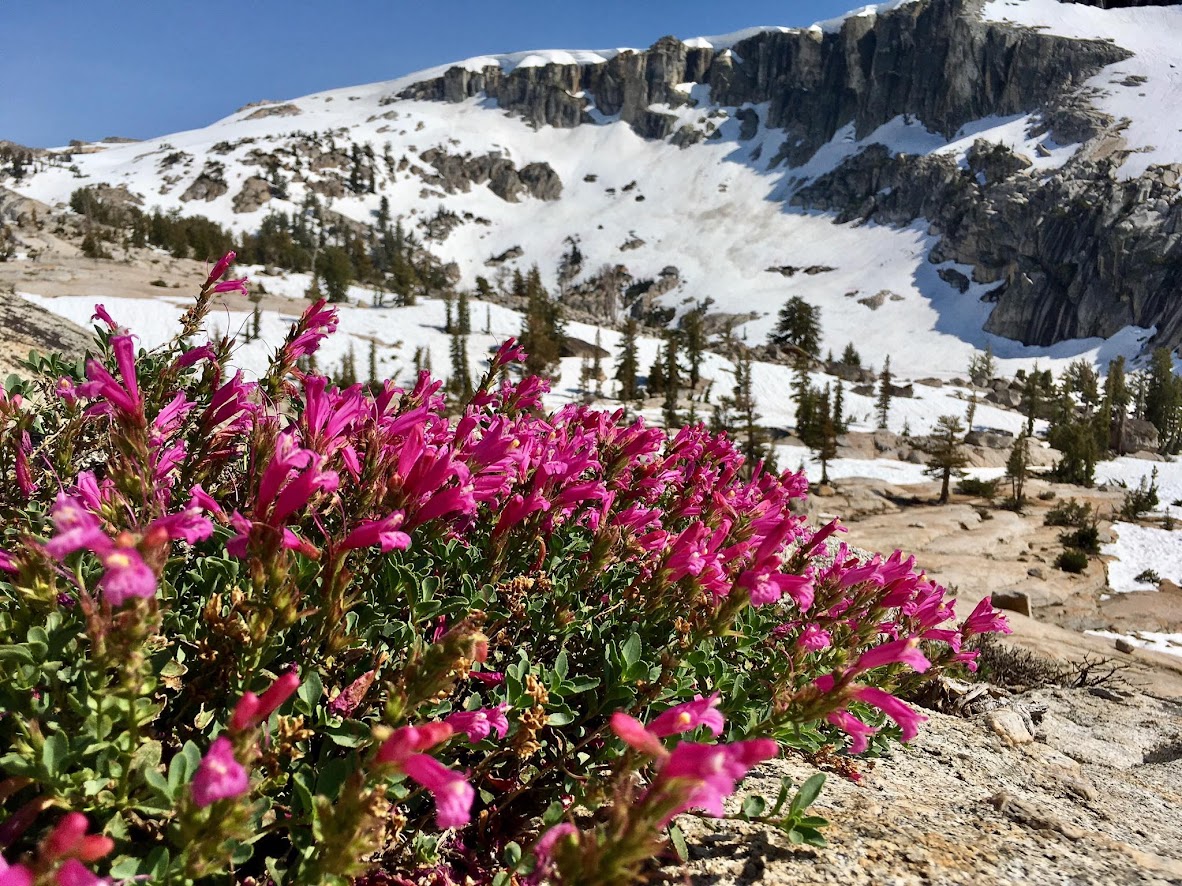 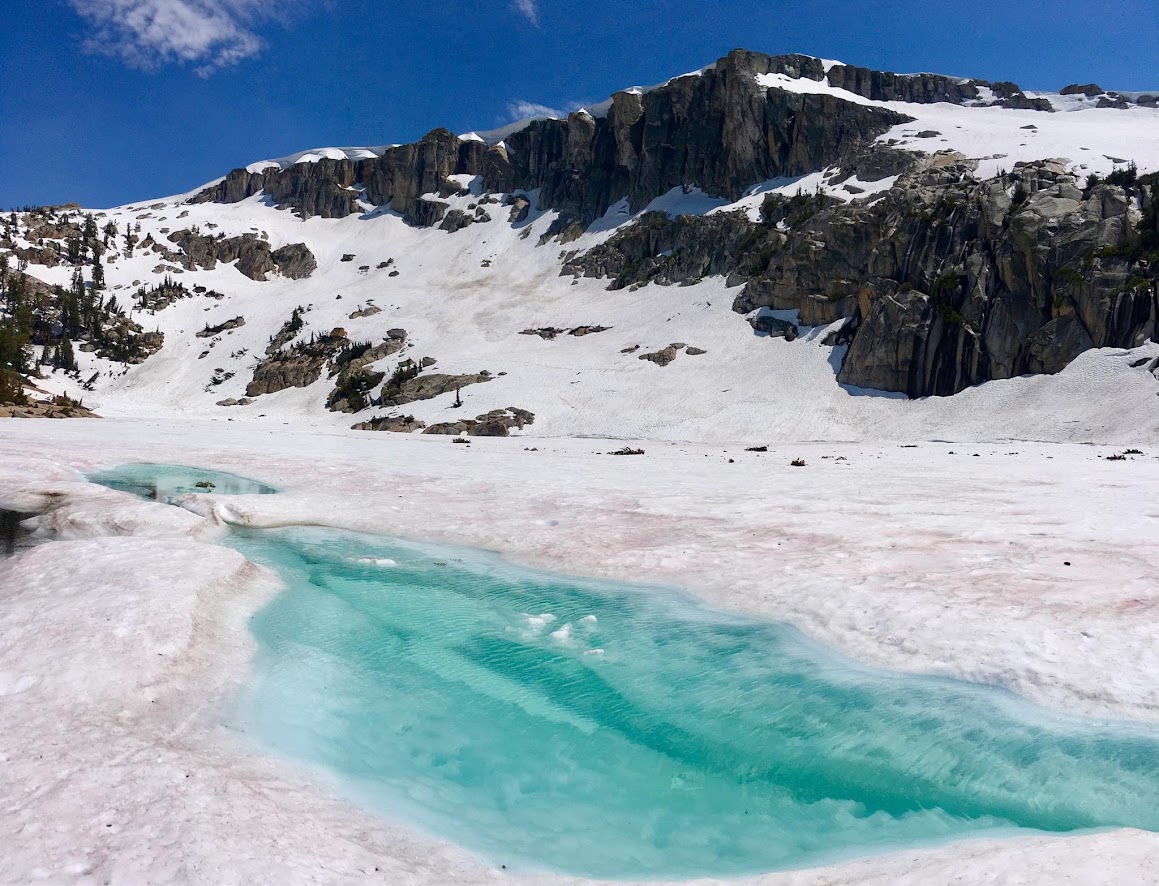 The ascent to Granite Dome’s summit is fairly straightforward from the lakes. On both of my climbs I ascended directly to the ridge from Upper Lewis Lakes. If early in the season (or a heavy snow year like this year when snow will persist through much of summer) consider bringing ice and crampons as the slope to the ridge is moderately steep. Once on the ridge it’s fairly flat with some nice alpine wildflowers amid the volcanic rocks with some interesting rock features as one approaches the summit. Several false summits are passed on what feels like a long ridge traverse before the highpoint is reached. The best views of the lakes are located slightly below the summit where the flatter rocks of the summit area abruptly transition to the precipitous granite cliffs. 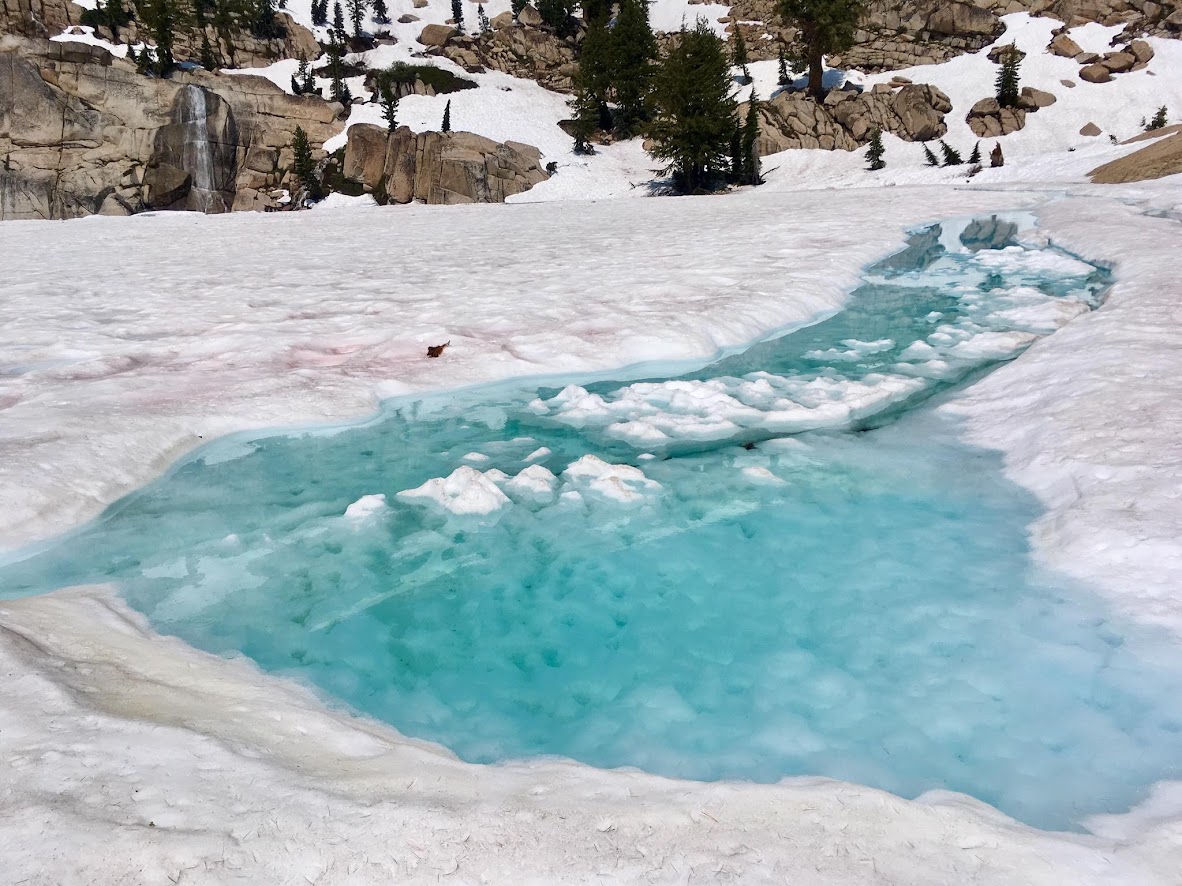 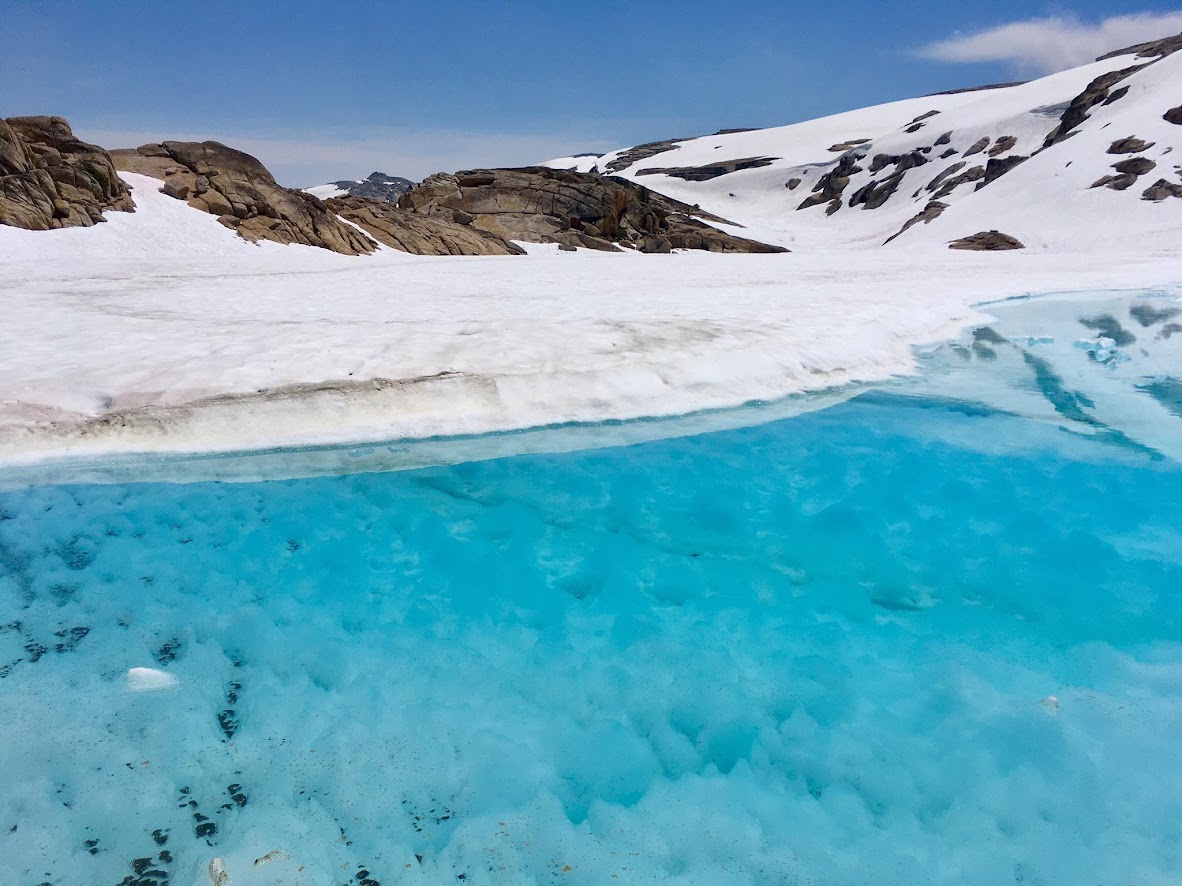 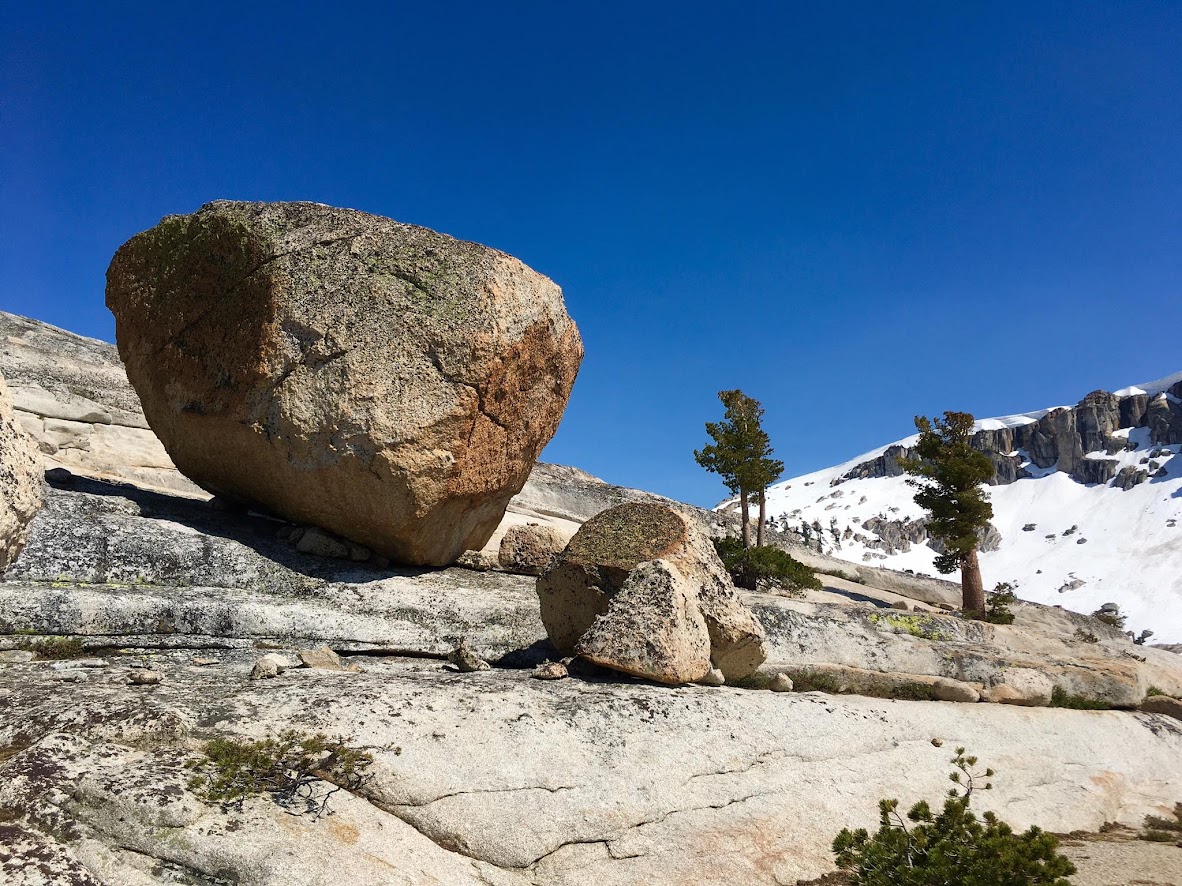 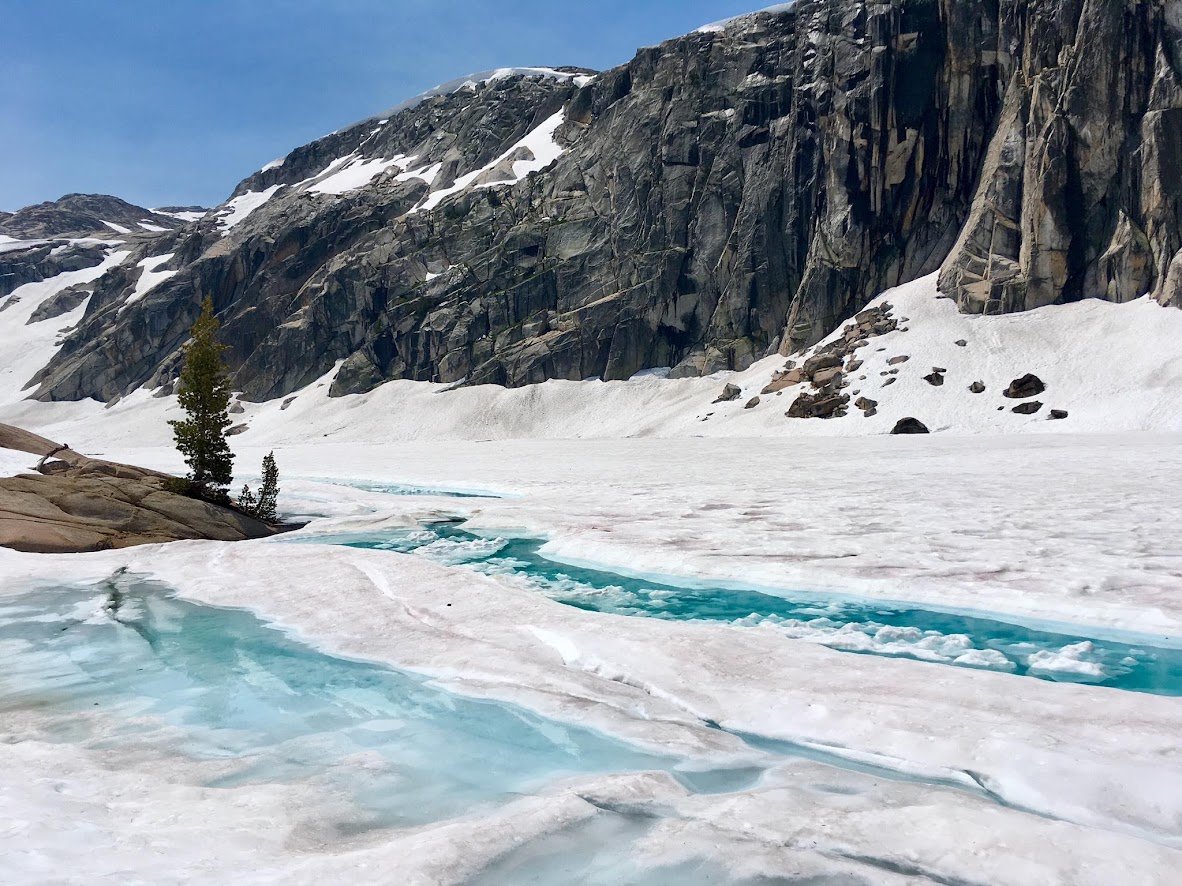 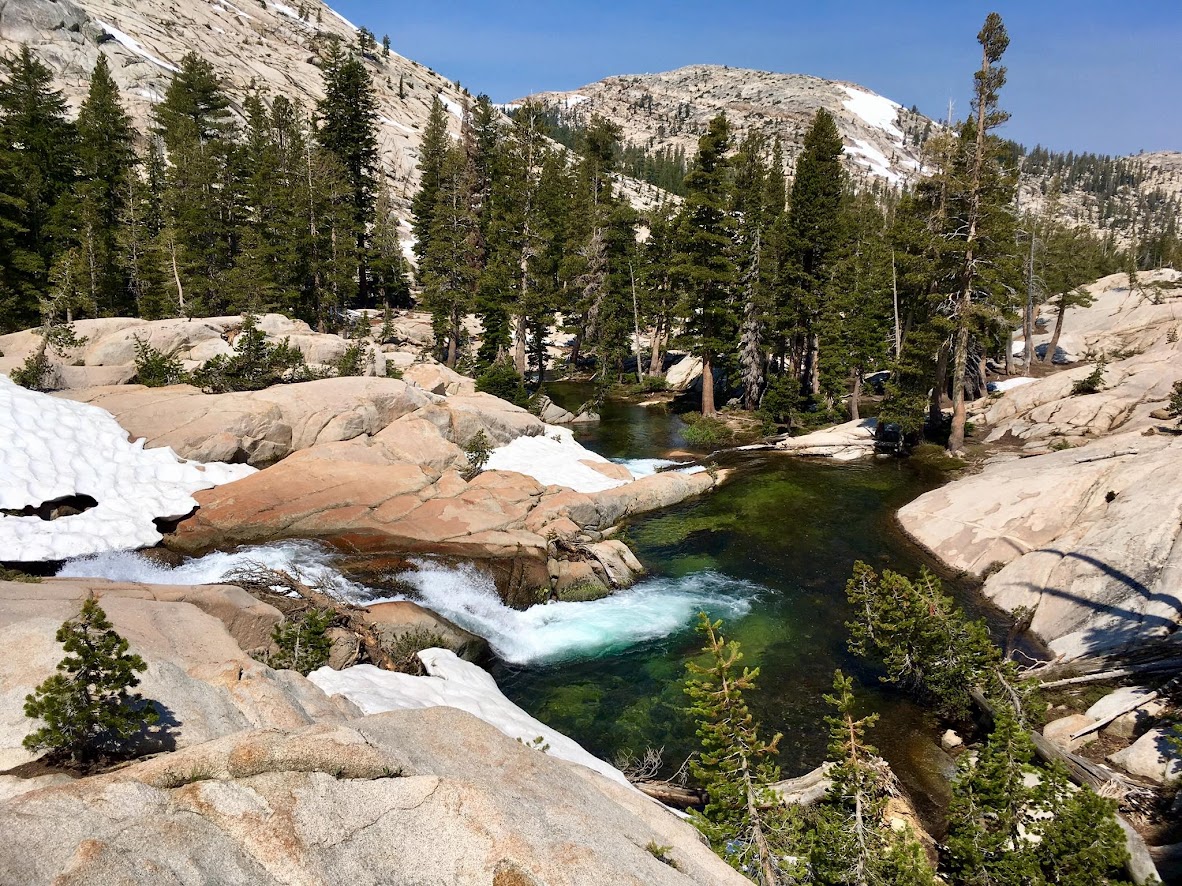 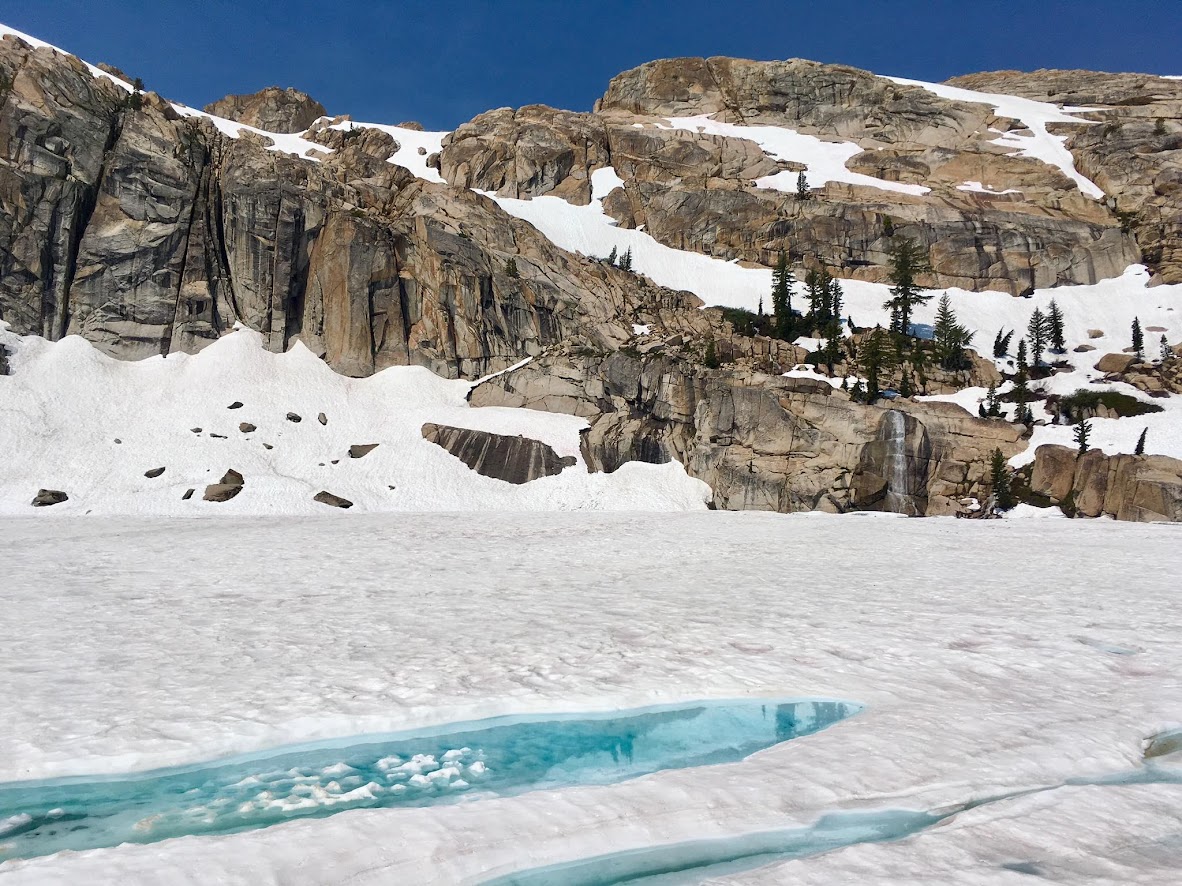 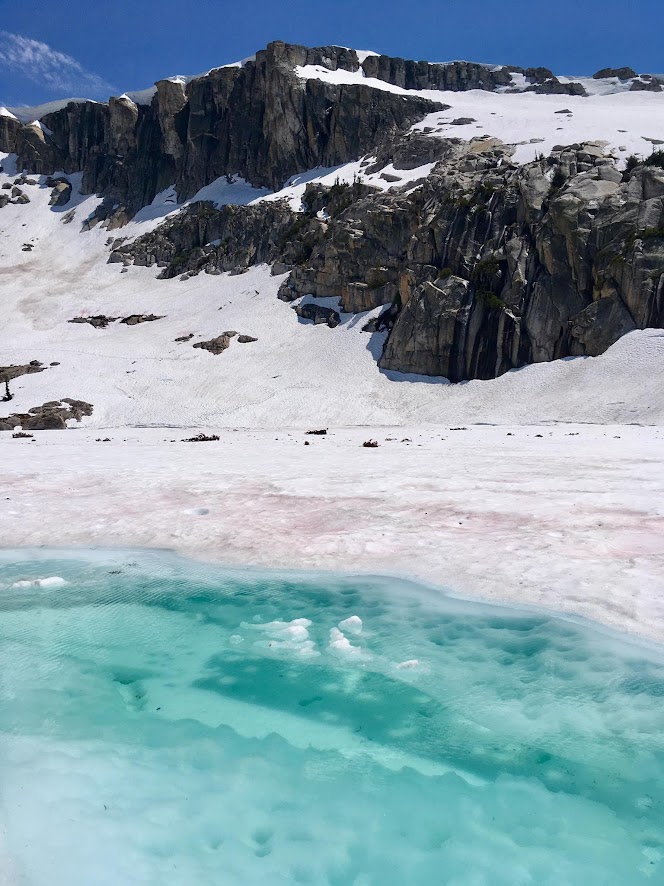 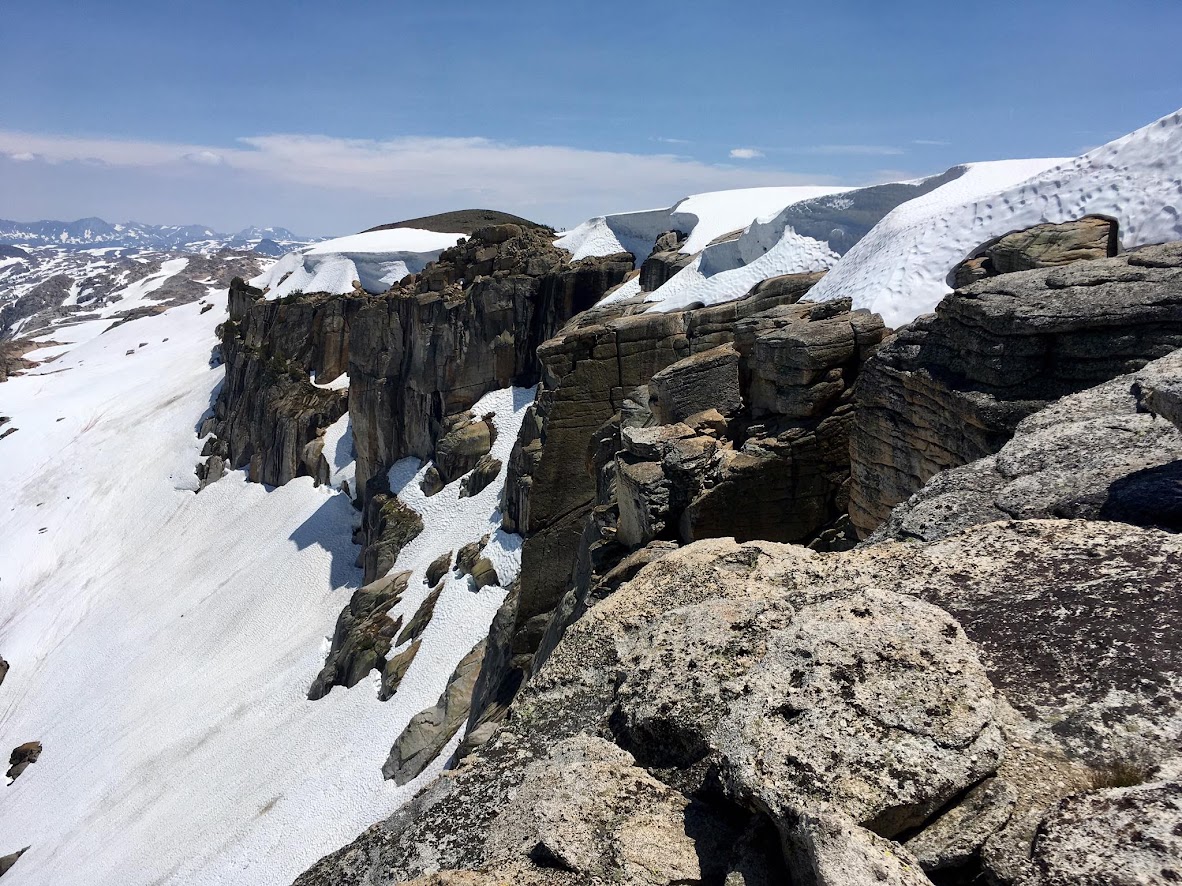 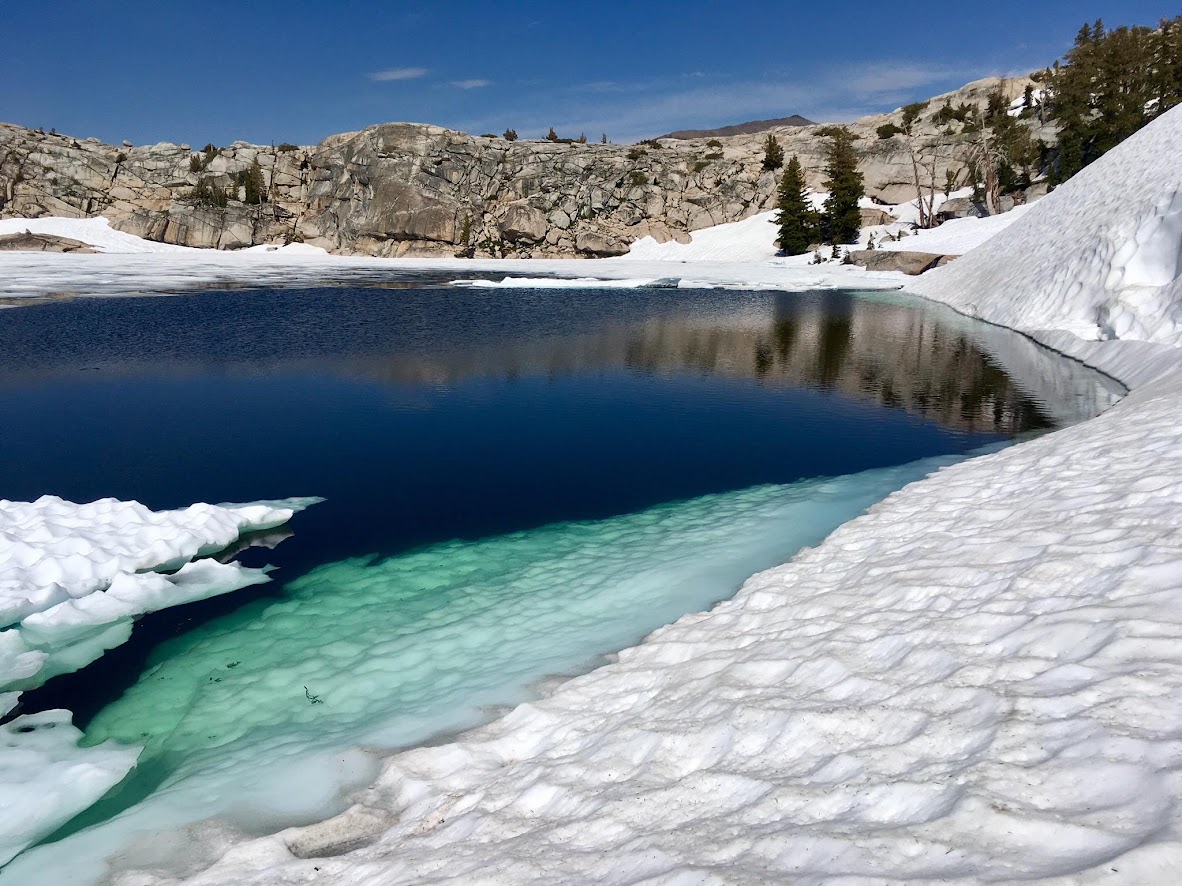 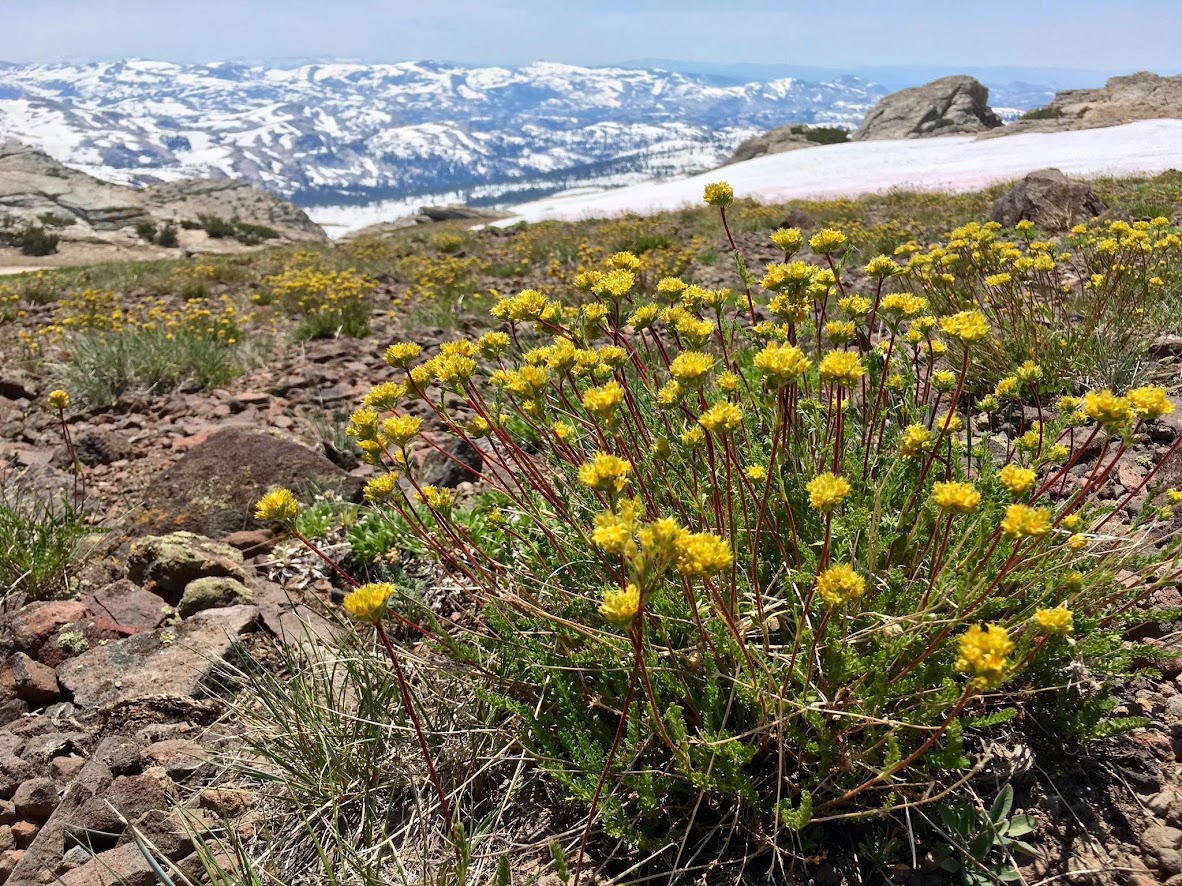 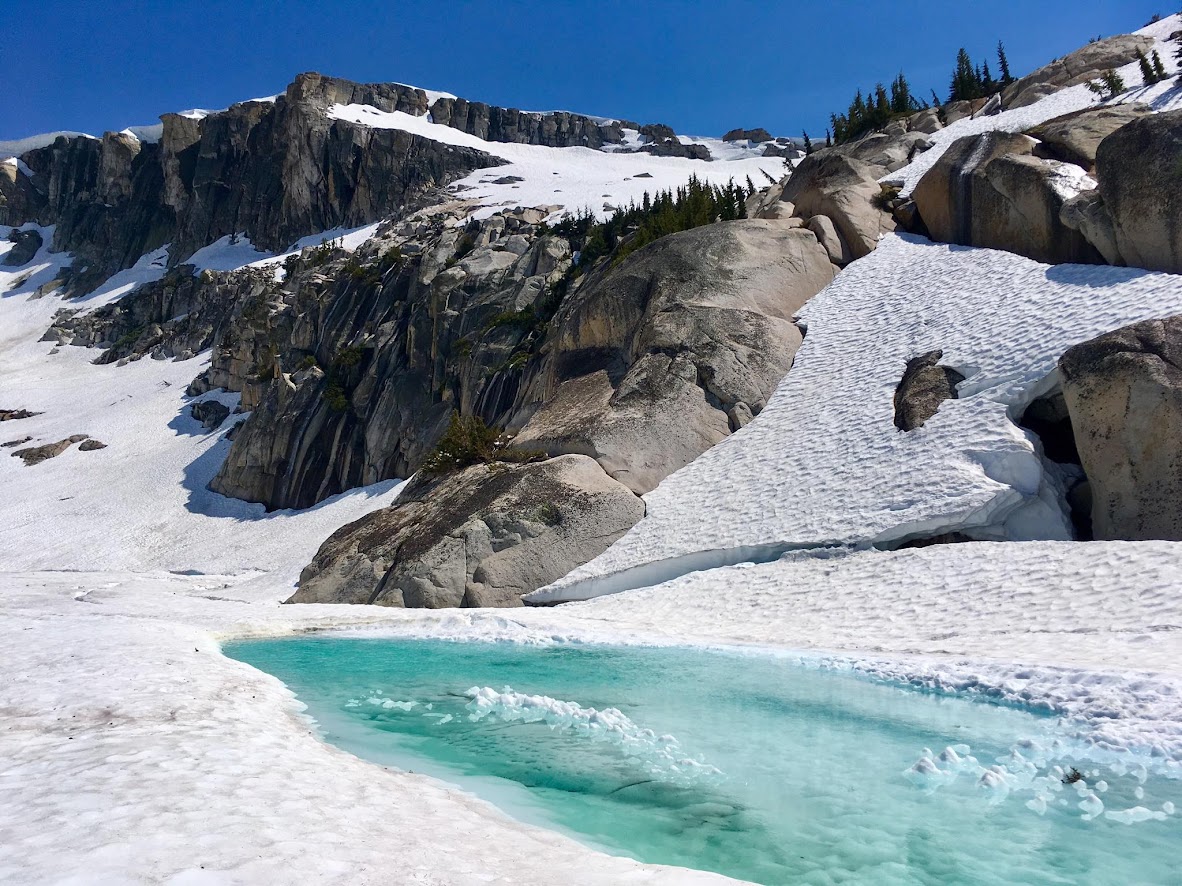 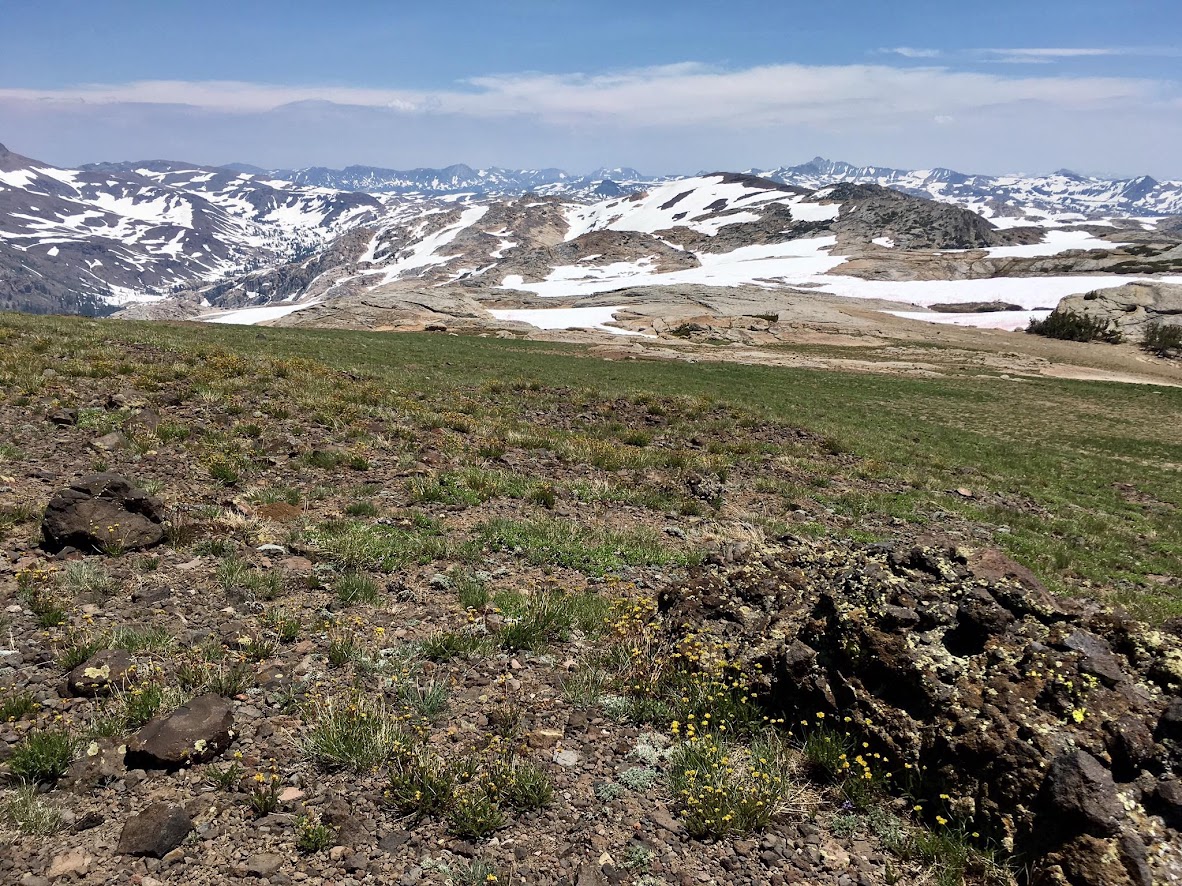 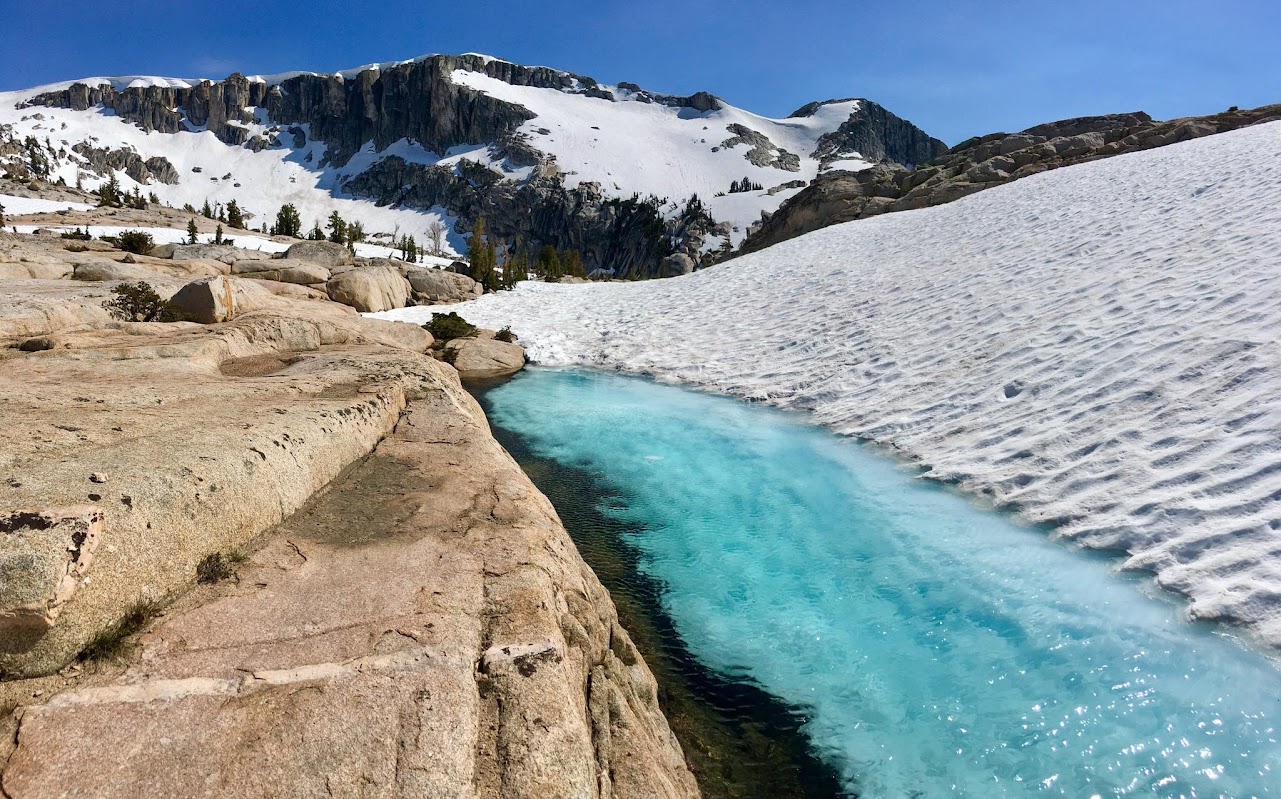 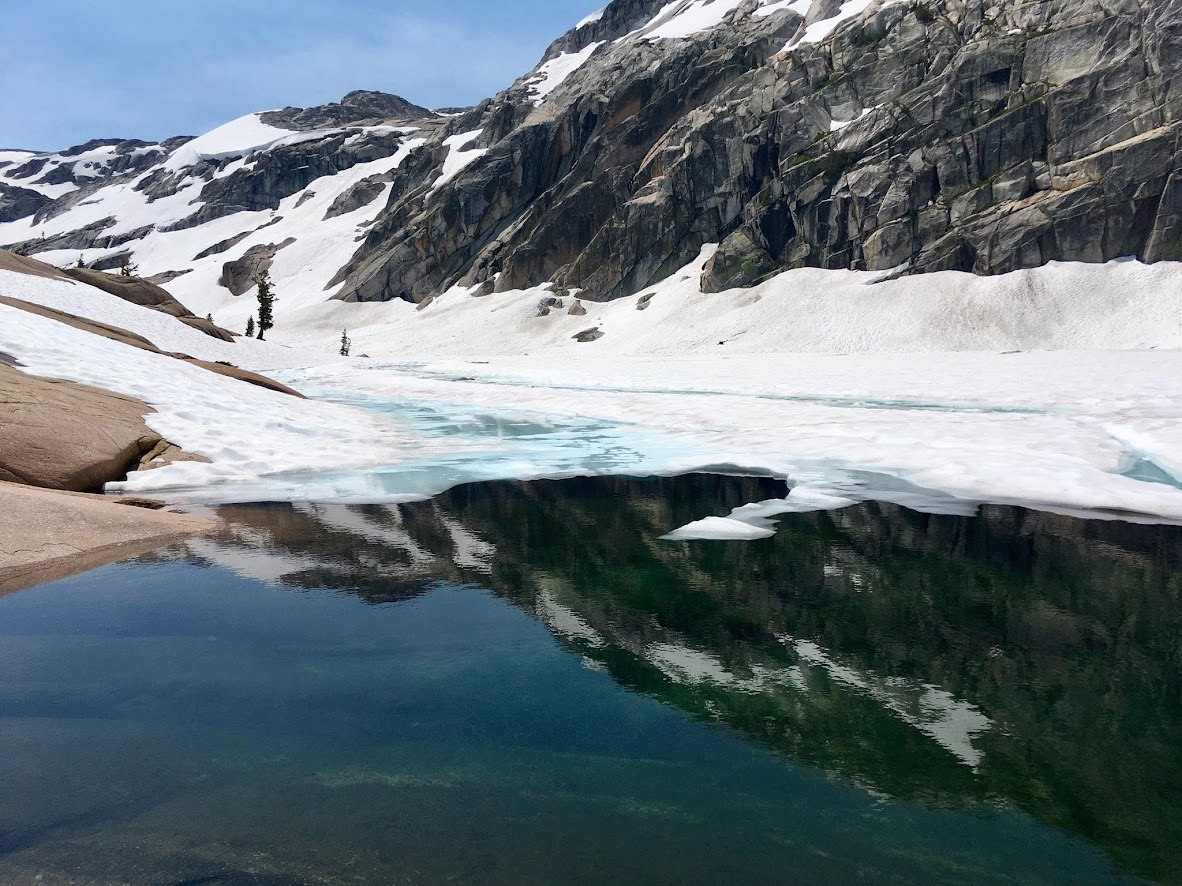 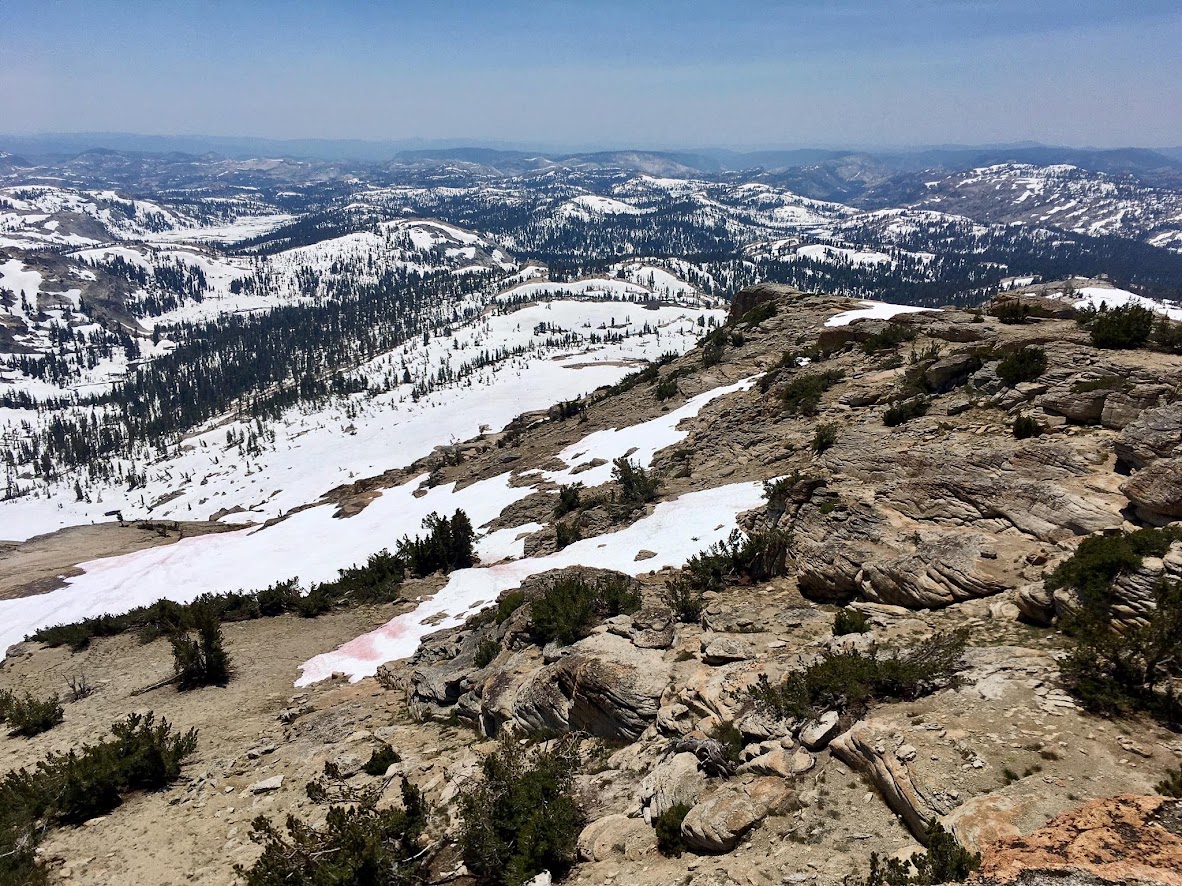 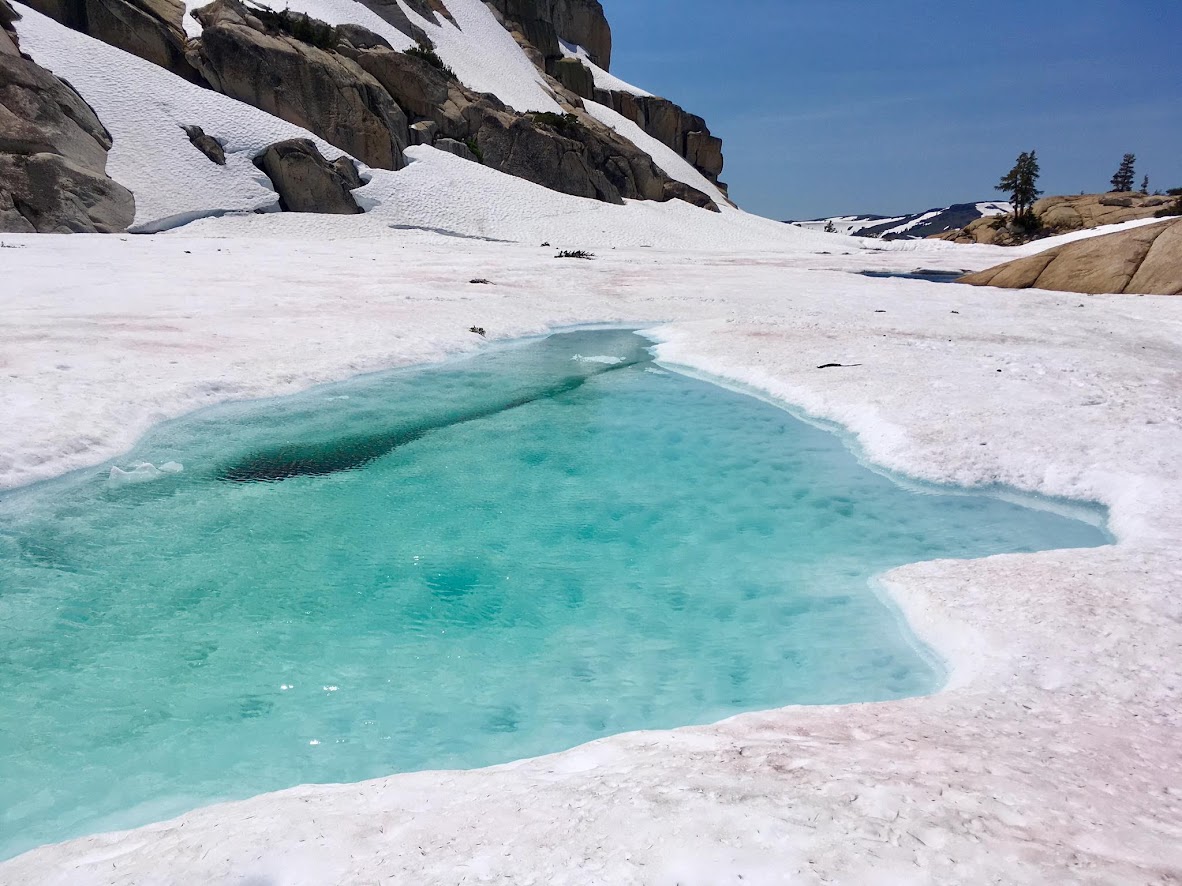 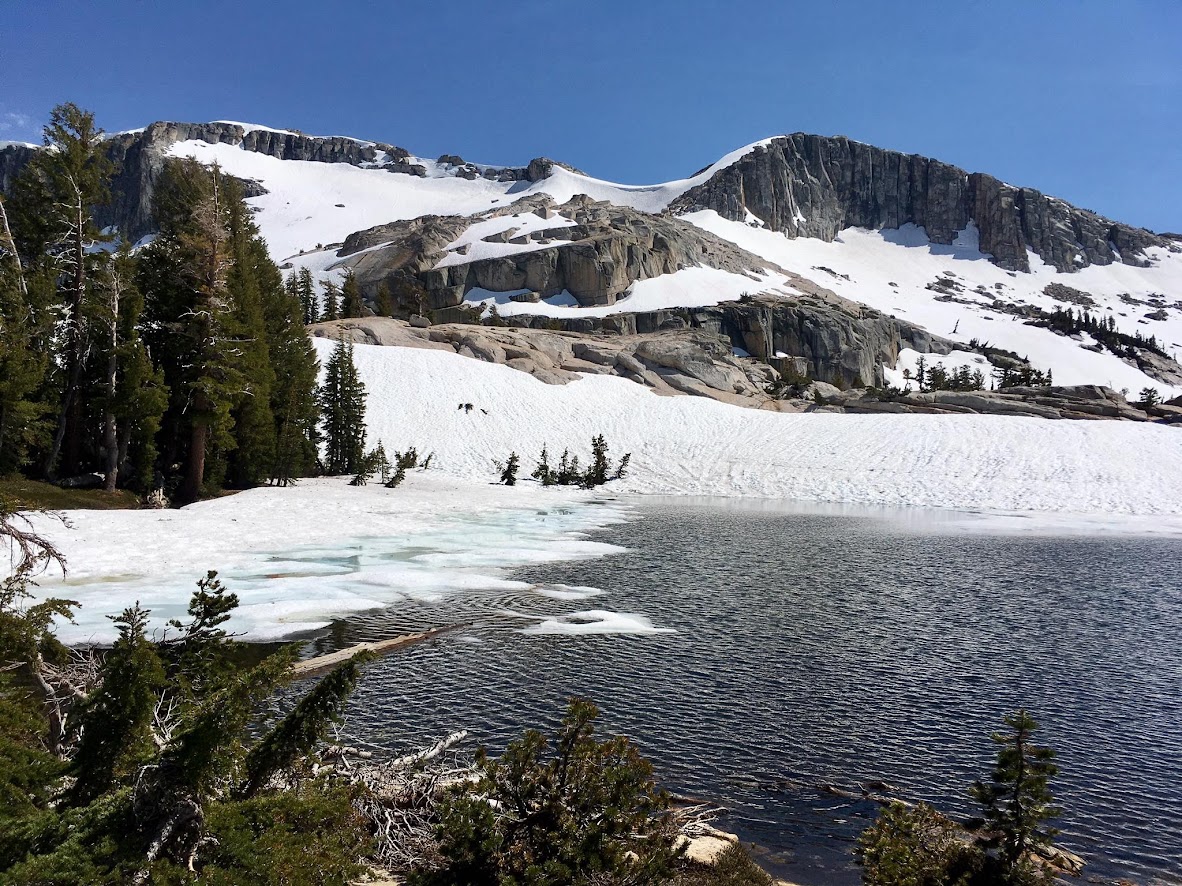 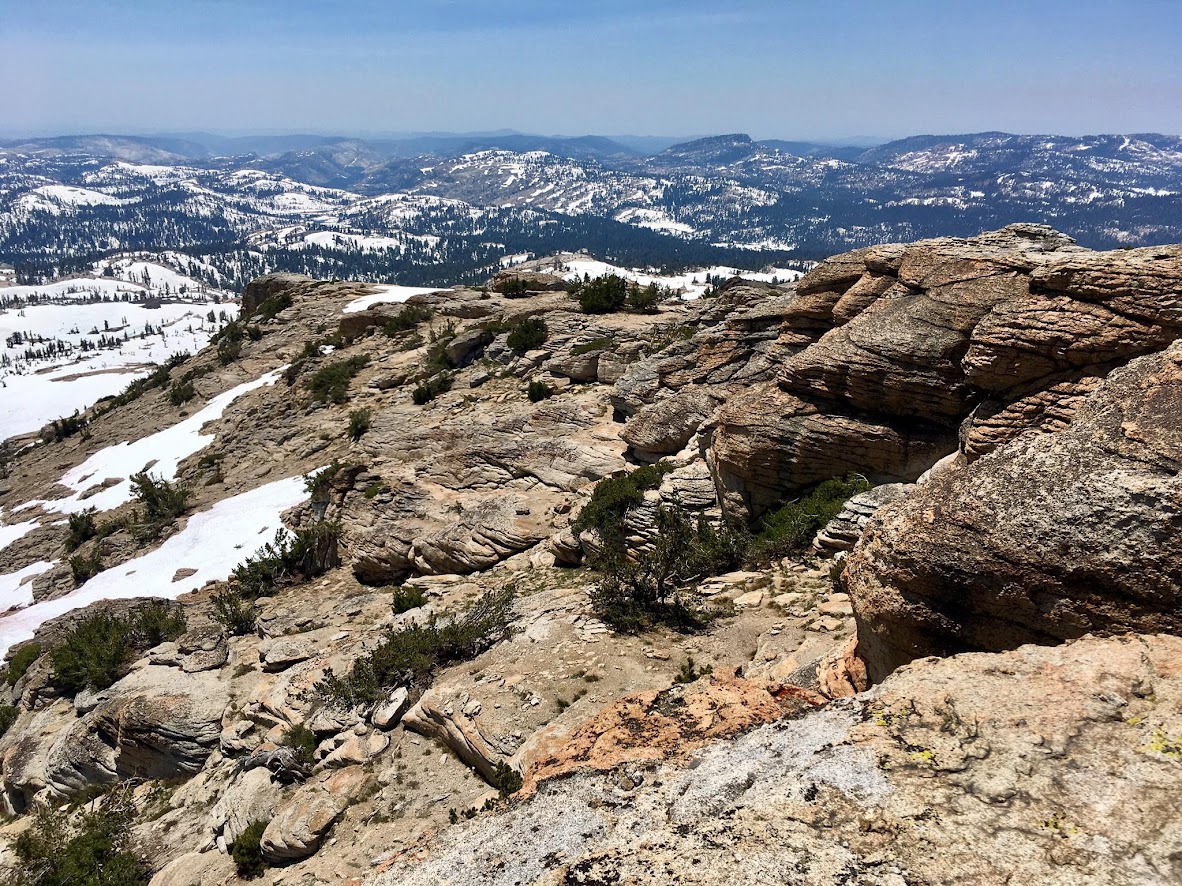 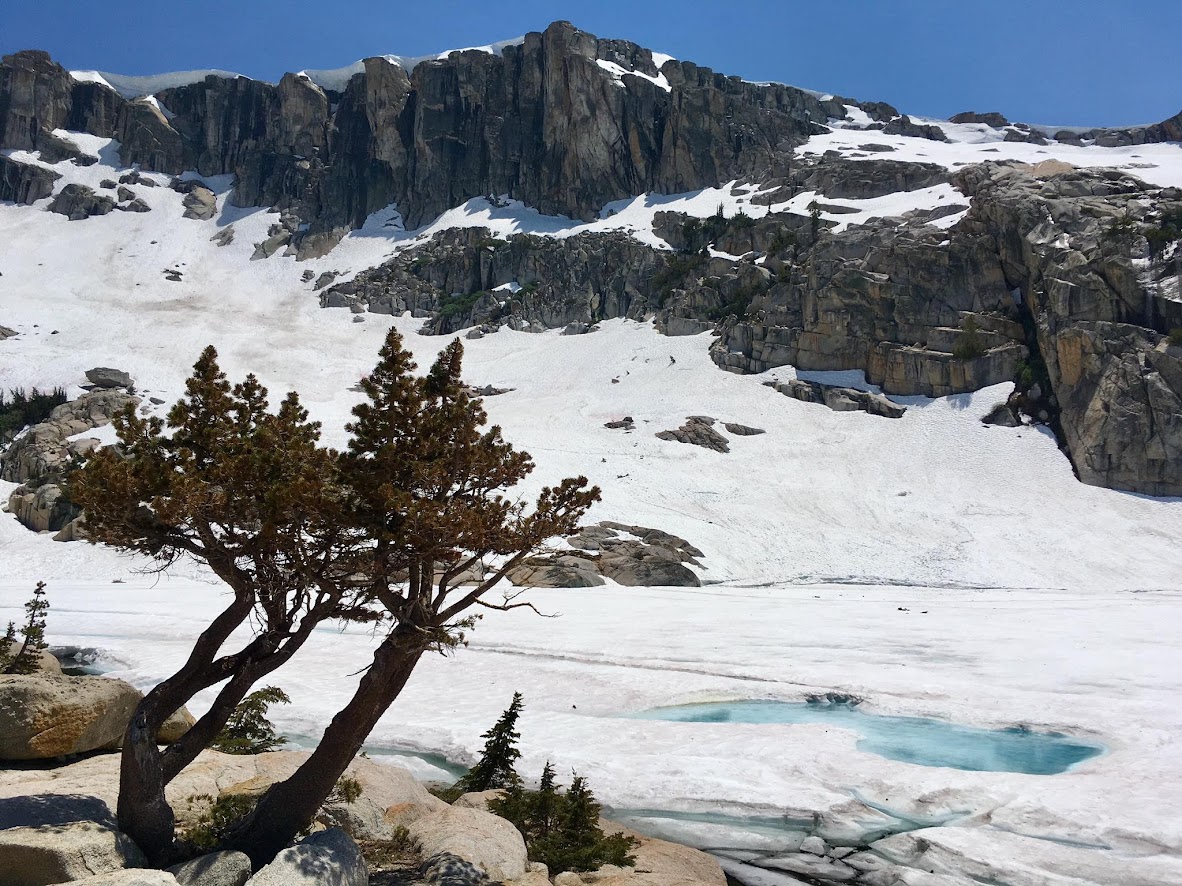 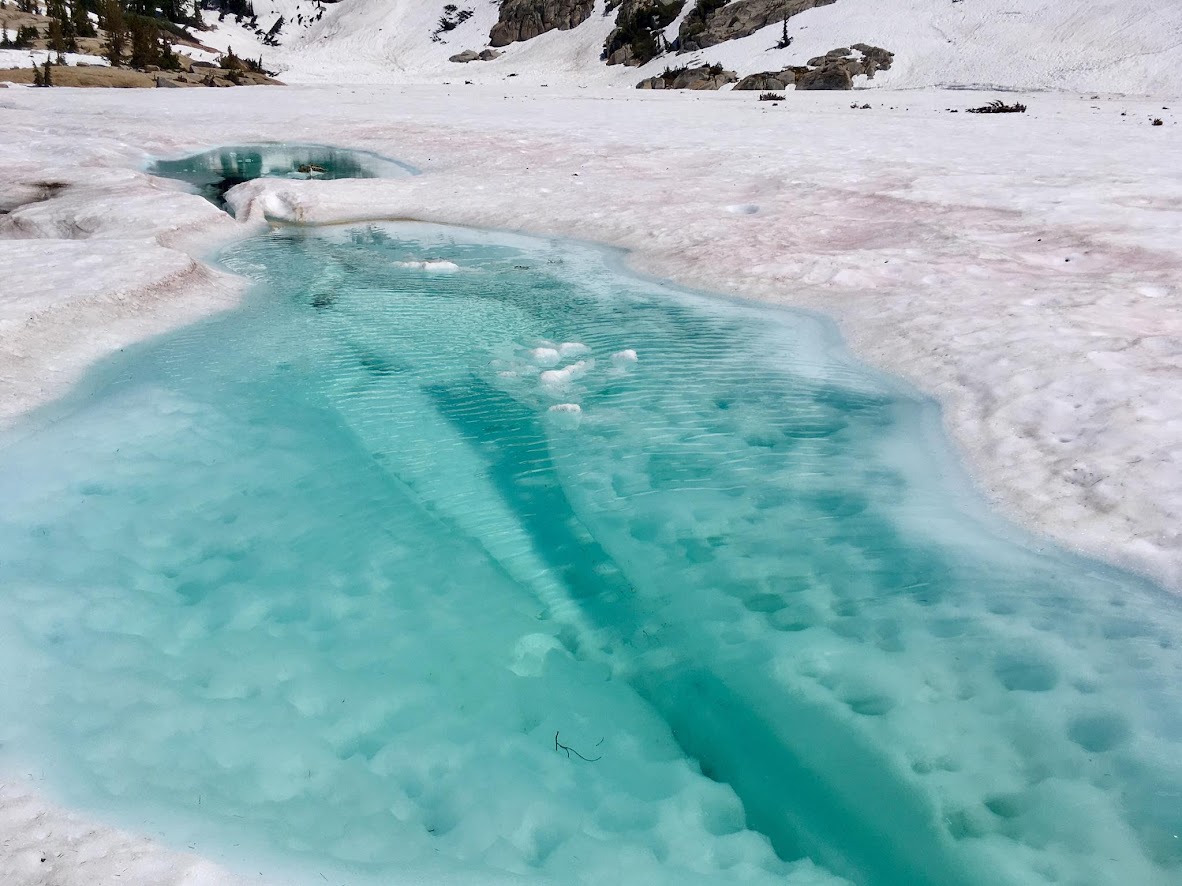 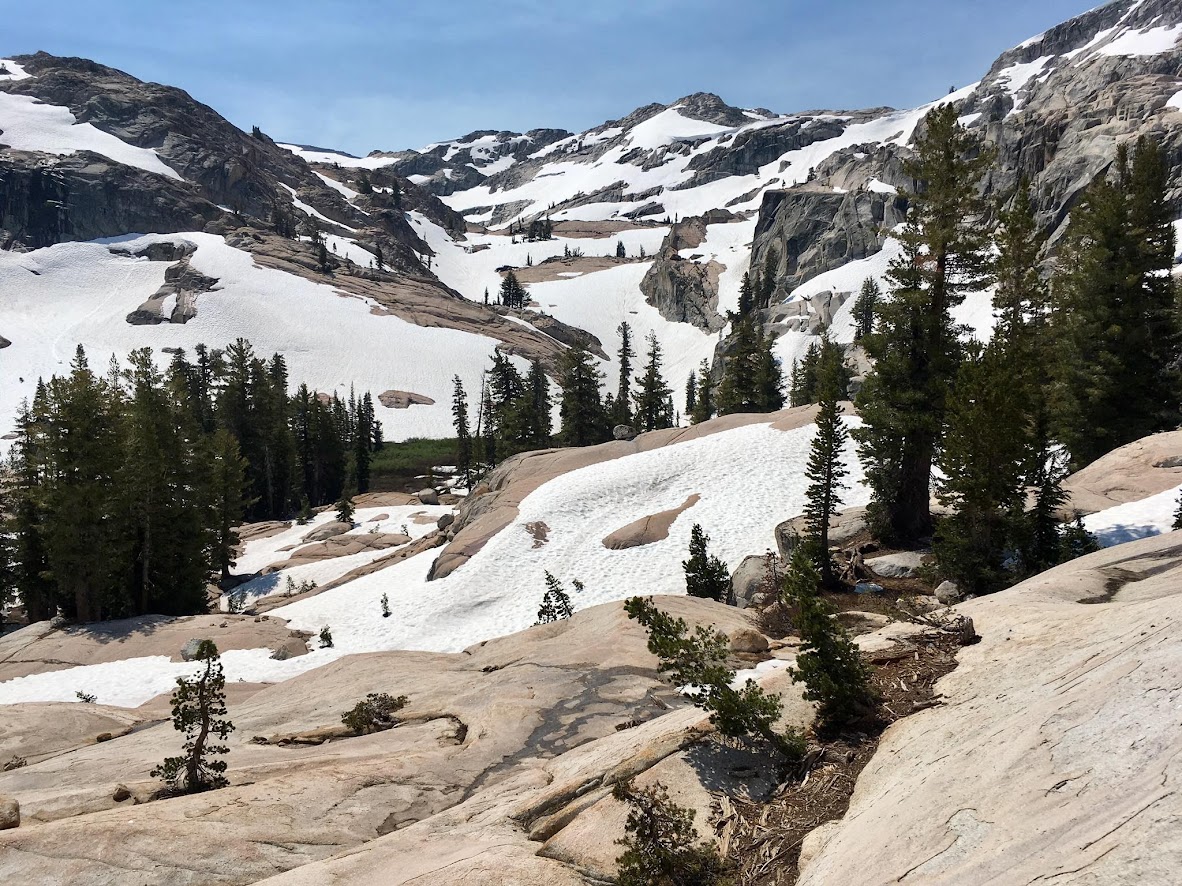 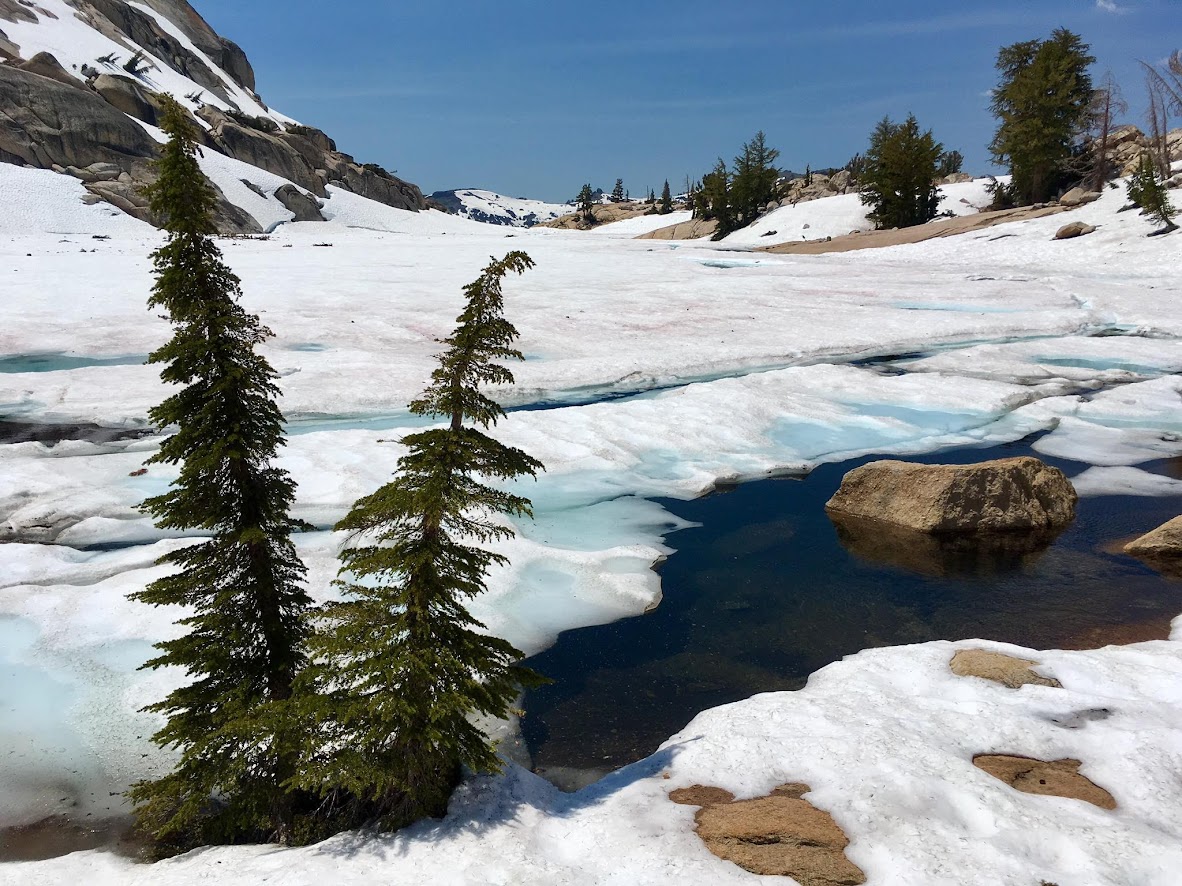 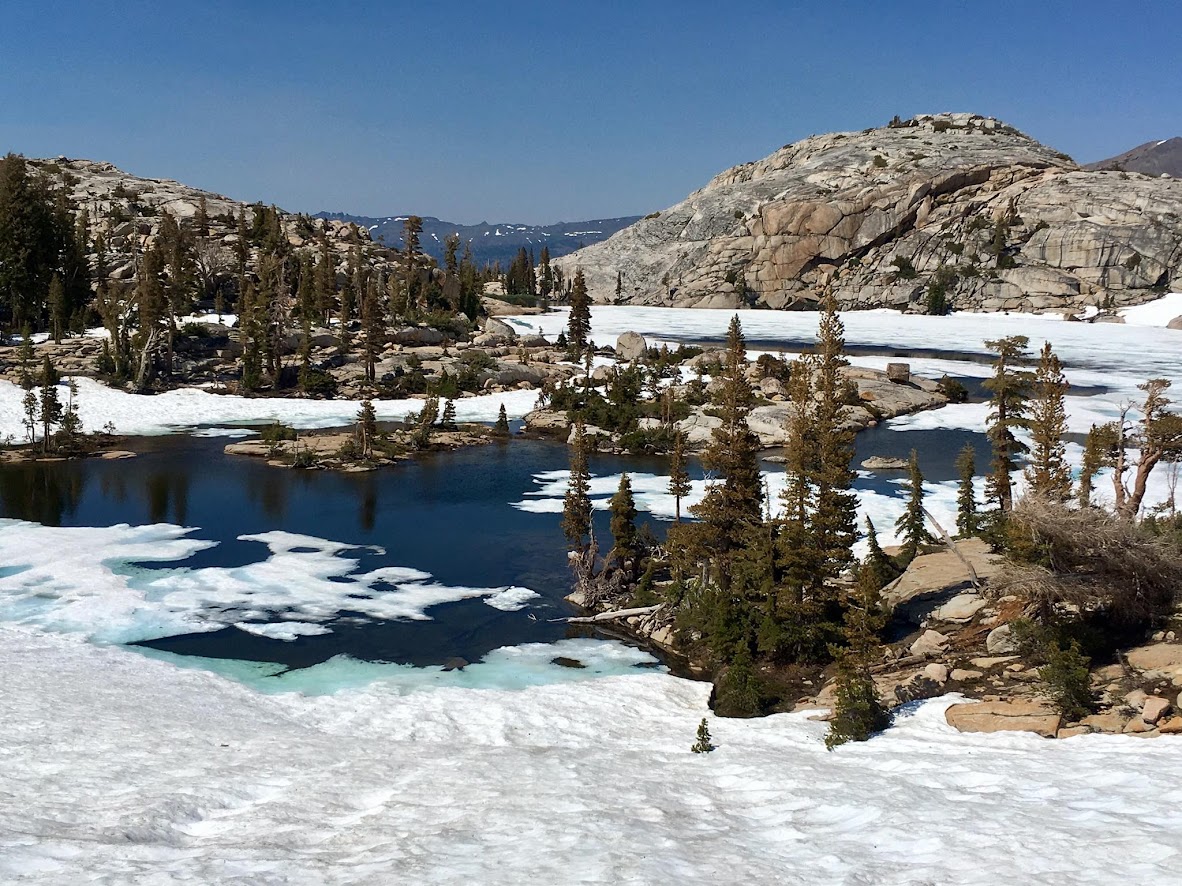