Note: While I don’t get around to blogging about most of my adventures these days for various reasons, I’ll have a few posts coming up about summer and fall adventures from 2019!

The Marble Mountain Wilderness is a 241,744 acre wilderness in Siskiyou County in far Northern County. The namesake feature of this vast expanse of wildland is Marble Mountain, which contains a combination of bright white limestone and black metamorphic rock giving the mountain a marbled look. It’s unclear where Marble Mountain starts or ends, but one could argue that it runs from Kings Castle (7,405 ft) in the north to Point 6,523 ft above Rainy Lake in the south. Between these two points is a 6+ mile crest or rim with well over a dozen points or peaklets. The highlight portion of the rim is a two mile stretch between Black Marble Mountain (7,442 ft) and Peak 6,881. In general, the west and north sides of the rim in the highlight portion contain steep cliffs while the south and east sides are more gradual. The Pacific Crest Trail traverses the length of the mountain but lower on its slopes. While there are some excellent vistas on the PCT when it traverses meadow areas, it is largely in the forest so the true grandeur of Marble Mountain is somewhat obscured.

Fortunately, a relatively straightforward off-trail traverse can be accomplished on top of the rim from Kings Castle all the way to the southern terminus. Along the way the rim traverse only cross one trail at Marble Gap and there’s only a couple sections of class 3 climbing.  There’s no right or wrong way to do the Marble Mountain Rim in terms of direction (northbound or southbound) or how much of the rim you decide to traverse. The terrain lends itself to easy cross country travel with numerous entry and exit points and possibilities.

For a suggested complete tour of the Marble Rim, leave the trail at lovely Paradise Lake and find a usepath that heads upslope to a saddle between Kings Castle and Point 7082. From the saddle, the usepath turns north toward Kings Castle before petering out in the grass, but the way to the peak is obvious. The summit rocks of Kings Castle look like they might require some scrambling from afar, but upon arrival small gullies cut through the cliffs providing easy access to the summit.

From Kings Castle the rim traverse begins. The next 3.5 miles is an undulating traverse over numerous points and small peaks. Each of these points contains excellent views of the surrounding terrain. The terrain is generally easy over grass and rocks, but expect more ups and downs and cumulative elevation gain than one might guess from inspection at Kings Castle.  As one continues south along the crest Black Marble Mountain becomes more prominent.

At the foot of Black Marble the alpland of the prior miles abruptly transitions to rock. Here one encounters the first expanse of gleaming white limestone. One can stay on top of the crest for some enjoyable class 2/3 scrambling before reaching steep meadows directly underneath Black Marble. For the easier route, traverse right to reach the crest just south of Black Marble and then loop back around to the summit. Black Marble has two summits, but the higher summit is the eastern one and contains a summit register as of this writing. The high point requires a few exposed class 3 moves but the summit area is surprisingly spacious. From Black Marble enjoy a tremendous view looking north toward Kings Castle, the entire southern portion of the rim and points farther afield including virtually all of the Marble Mountain Wilderness, Siskiyou Wilderness, Russian Wilderness and even the Trinity Alps.

At Black Mountain the most scenic and enjoyable part of the traverse commences. Soon after leaving Black Mountain the rock transitions back to white limestone and from here it’s nearly 2 miles of near continuous white limestone. For this next section the white limestone is steep on the east but precipitous on the west.  Peak 7321 is high point of this limestone expanse and is known as White Marble Mountain. A flat area near the summit contains a widely dispersed grove of spectacular Northern Foxtail Pines. The descent from White Marble to Marble Gap (6,800 ft) is a white limestone staircase with numerous fascinating geological features in the rock apron.  Staying on the spine of the crest will require a couple sections of class 3 downclimbing to reach Marble Gap.

At Marble Gap meet the only trail that crosses Marble Mountain. Here is a brief intermission in the white limestone but it picks right back up for another mile of limestone traversing. Peak 6,990 is the next point on the traverse south of Marble Gap which may look intimidating from underneath. However, a steep left to right ramp provides a class 3 scramble route  directly to Peak 6,990 allowing one to essentially stay right on the crest. From Peak 6,990 the terrain to the east mellows out with excellent views to Marble Valley but the cliffs on the west side continue to be precipitous.   Eventually reach Peak 6,881 and look back at jaw-dropping views of White Marble and Black Marble. Here one can appreciate the marbled nature of the massif.

At Peak 6,881 the rim shifts from a north-south orientation to more of an east-west direction. Here one could leave the rim skipping the final portion to link up with the trail just to the south. However, it’s well worth the effort to continue along the rim for another mile as it traverses several more beautiful limestone outcroppings, each of which have spectacular vistas. While this section of the rim is lower in elevation, it’s position provides tremendous views down Rainy Valley and the precipitous west side of the Marble Rim between Black Marble and Peak 6,881.   Eventually reach your desired end point and take the trail back to Marble Valley.

Either Paradise or Lovers Camp Trailhead are logical starting points for the route.  Either trailhead will require use of the Pacific Crest Trail to loop in the Marble Rim traverse. Route on Strava here (with more photos). 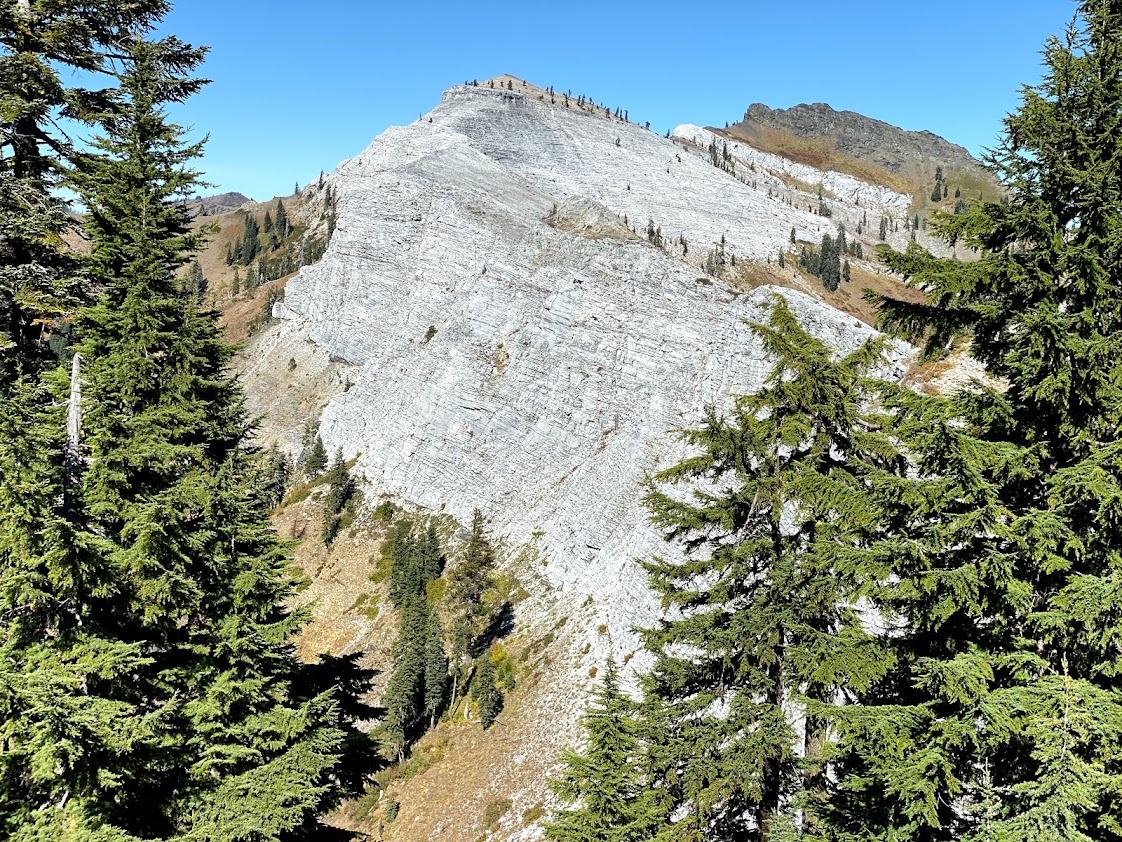