Mount Andrea Lawrence was named in 2013 when President Obama signed into law legislation officially naming this beautiful summit in honor of Olympian and environmentalist Andrea Mead Lawrence.  Prior to the official naming, the 12,245 ft mountain was sometimes known as “Gem Peak” as evidenced by the cover of an older summit register.  The mountain is taller, more aesthetic and possesses better views than its neighbor, Donohue Peak, but it is climbed much less frequently owing to its position farther removed from the John Muir Trail.  While infrequently climbed, Mount Andrea Lawrence is very prominent along the JMT with it’s photogenic pyramidal shape towering above Rush Creek Basin from Island Pass to near Donohue Pass. The peak is most often climbed via Silver Lake and the Rush Creek Trail but a very scenic alternative is via the Mono Pass Trailhead which is described at SummitPost.  In fact, this 20 mile out-and-back route is so nice that I recommend it over Rush Creek.  While the route starts at a higher elevation at the Mono Pass Trailhead, it includes a pass up and over Kuna Crest which requires some elevation gain on the way back so the net amount of elevation gain is similar to Rush Creek.  In addition, the majority of this route is off-trail. While generally friendly cross country terrain, some may find that the predominantly trail route via Rush Creek is easier.   Route here.  Complete photo album here.

The main advantage of the route starting from the Mono Pass Trailhead is the incredible scenery along the way, which Rush creek largely foregoes.  The excellent scenery starts 5 miles away from the trailhead at Spillway Lake where the trail ends and one emerges from the Whitebark Pine forest into the alpine.  After a long stretch of grassy tundra along Spillway Lake, meadows and some talus can be taken to Helen Lake.  In September of this year, remnant snow patches along the creek flowing from Helen Lake created spectacular snow and ice formations from what used to be a snow bridge.  Helen Lake is a large and beautiful body of water at nearly 10,100 feet nestled beneath the Kuna Crest.  One can round Helen Lake on either its east or west side. The east side contains some marshy sections while the west side has a few minor impediments.  Time wise it’s a wash, except your feet might get wet on the east side.  Once on the south side of the lake, ascend granite slabs and patches of grass toward an obvious low saddle along the Kuna Crest.  The final pitch transitions to large talus blocks but it’s relatively short.  Farther to the left is more gravel and smaller rocks which may be easier.

Once at the saddle, the terrain is gradual with an easy gravel descent before rounding a ridge via some talus and granite slabs to enter Kuna Basin.  Enjoy the amazing views of the Mount Lyell and the Cathedral Range which have opened up since passing the saddle above Helen Lake.  Once around the ridge and into Kuna Basin, generally aim straight for Mount Andrea Lawrence, now visible across the expansive basin. This requires descending close to 1,000 feet to a small lake in the basin before the final ascent to the mountain commences. Pass through lovely tundra-like meadows, picturesque tarns, and clumps of Whitebark Pines.  The rugged walls of Kuna Peak and Koip Crest tower above, while Mount Lyell and the peaks of the Cathedral Range appear close at hand across Lyell Canyon.  This corner of Yosemite is rarely visited and you won’t find human use trails through here. It’s peaceful and spectacular mountain wilderness at its finest.

From the lake in Kuna Basin at ~10,800 ft, traverse through some more meadows and then begin ascending to a small tarn immediately beneath Mount Andrea Lawrence. Follow the drainage up from the tarn toward the pass between Donohue Peak and Mount Andrea Lawrence to extend use of friendly granite slabs and meadows as long as possible.  When the slabs run out and the angle steepens turn left to either ascend directly up to Mount Andrea Lawrence via a class 2 chute or utilize the more solid, but more time-consuming class 3 west ridge.  Either route emerges at the south summit. While not the high point, the south summit has the best views looking to the Cathedral and Ritter Ranges, including Mount Ritter, Banner Peak, Rodgers Peak, Mount Lyell and Mount Maclure.  Head across the summit ridge to the north to find a slightly higher collection of rocks. Underneath these rocks is at least three summit registers. It appears some parties have had difficultly finding the registers, hence the placement of new registers, but now they are all located at the same place.  The higher north summit has excellent views toward Koip Crest, Kuna Peak and the Lost Lakes.  One can either opt to return the same way or wander around through Kuna Basin, the Lost Lakes, Donohue Peak and other peaks in the vicinity. 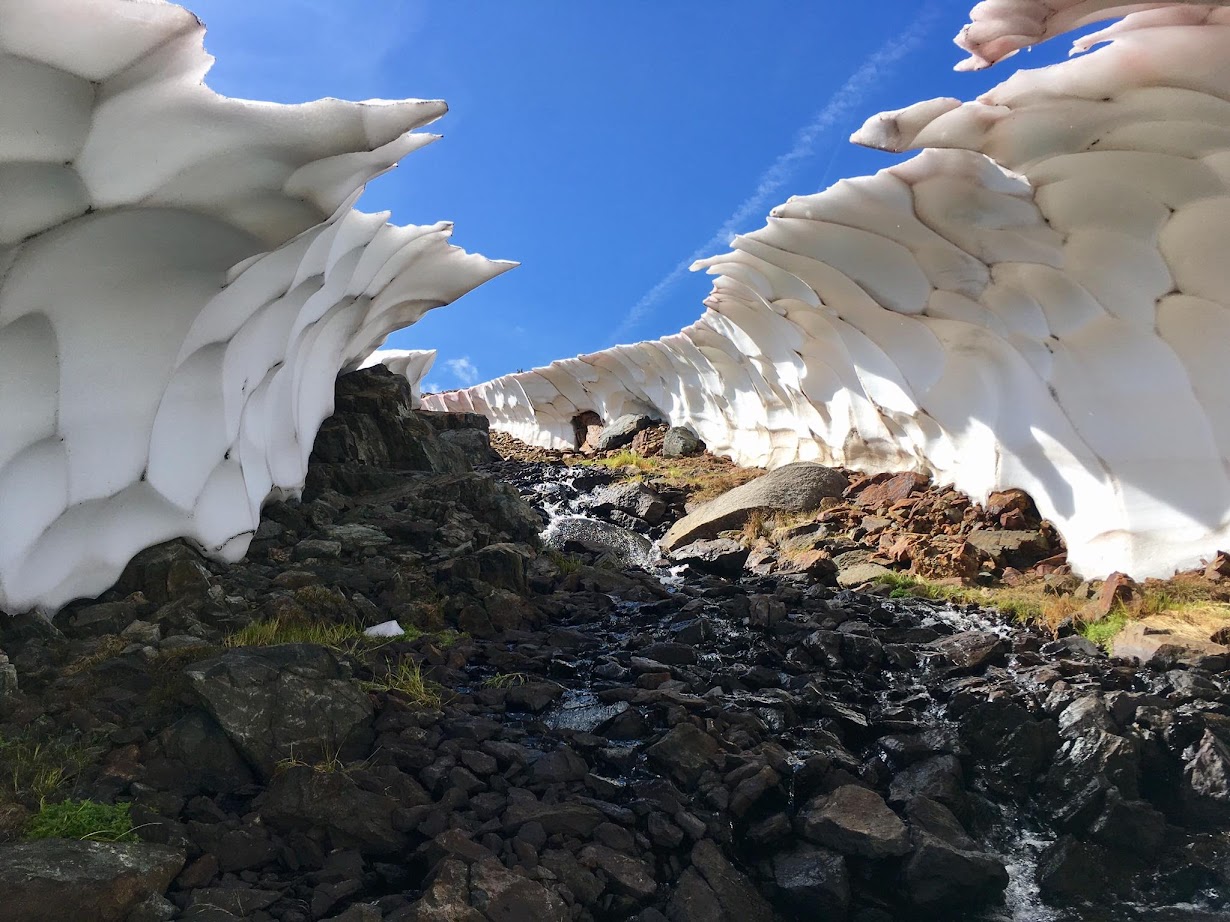 Looking up the collapsed snow bridge